The Gambia Bans African Rosewood Export And How To Ensure Compliance

Halima Cissé, a 25-year-old Malian woman, has fascinated the world after giving birth to nine children at once. While announcing the birth of the nonuplets, Mali’s health minister, Dr. Fanta Siby, said, “the newborns (five girls and four boys) and the mother are all doing well.”

The astonishing thing about Halima is the fact that she went into labor expecting to deliver seven babies. However, she bore nine. Throughout her pregnancy, doctors in Mali and Morocco conducted ultrasounds but failed to detect two of her babies. Halima has set a new world record by becoming the third woman to deliver 9 babies and all have survived. Previously, two other women have given birth to nonuplets but unfortunately, some died after a few days.

In Mali, Halima Cissé became popular after doctors revealed that she was expectant with seven children. The medics who were taking care of the young mother started getting worried about her welfare and the survival of her babies. According to them, Halima Cissé needed specialized care. Subsequently, health authorities intervened and flew her to Ain Borja Clinic in Casablanca, Morocco, where she gave birth.

According to Mali’s health minister, the decision to move her to Morocco was made on 30 March. The 25-year-old mother delivered by cesarean section on Tuesday after staying in the Moroccan clinic for five weeks. The medical director of the clinic, Prof Youssef Alaoui, said that the nonuplets were born at 30 weeks and weighed between 500g and 1kg. The director also revealed that the nine babies will be incubated “for two to three months.”

Halima Cisse, a woman in Mali, has given birth to 9 babies – 2 more than doctors had detected inside her womb – according to the West African nation's Health ministry, joining a tiny exclusive club of mothers of nonuplets👌🏿👌🏿👌🏿https://t.co/fUCn45Tlhv

A team of 10 doctors assisted by 25 paramedics conducted the extraordinary Caesarean section operation. During Cissé’s stay at Ain Borja clinic, doctors tried to delay her delivery for weeks. This was done to give the babies more time to develop. Prof Alaoui explained that Halima Cissé was admitted at 25 weeks of pregnancy and gave birth at 30 weeks. Her husband, Adjudant Kader Arby, received the good news with jubilation. Speaking to the BBC, Arby said,

Cause of Multiple Births 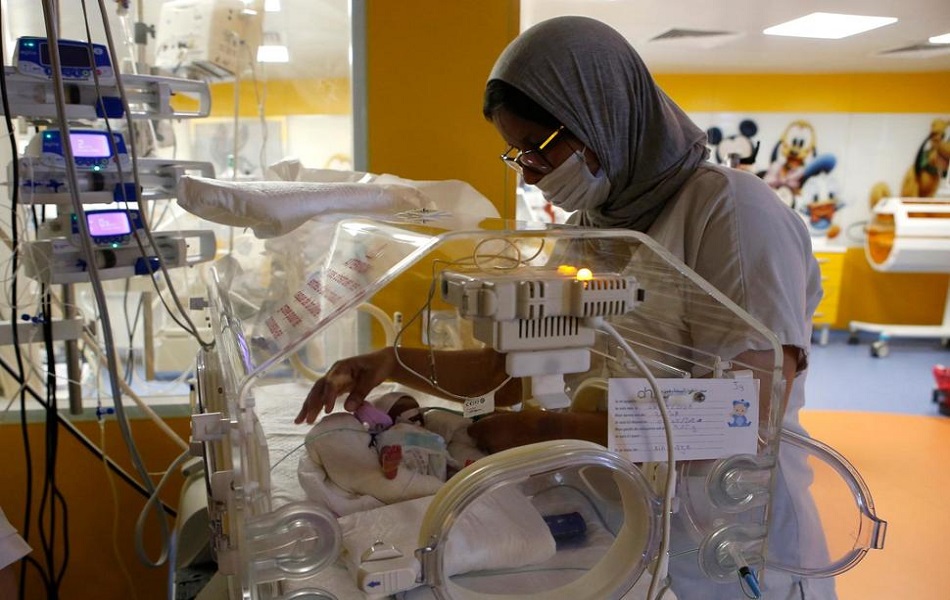 More and more women are receiving this treatment, which increases the possibility of multiple pregnancies. Another possible cause is that more women nowadays are attempting pregnancy when they are older. Older women can get multiple babies more easily than younger women, especially with fertility treatment.

Thus, Cissé’s pregnancy is fascinating because she was not using fertility drugs. While confirming this, the medical director of Ain Borja clinic told The Associated Press that “as far as he was aware,” Halima Cissé hadn’t used any fertility treatment.

Igbo-Ora, a town in south-western Nigeria, is dubbed ‘Twin Town’ because it has one of the highest multiple birth rates in the world. Almost every household in Igbo-Ora boasts of a set of twins. Also, rows of children at schools in the area are dotted with identical twins.

Multiple births are common among the Yoruba ethnic group, which is dominant in Igbo-Ora. Due to the prevalence of twins in the town, the Yoruba people have a tradition of giving children specific names. Mostly, children are named Taiwo or Kehinde, depending on whether they are born first or second.

A common view among locals is that the high twin birth rates are a result of the Okra leaf they eat. The Yoruba people commonly use Okra leaves to prepare their stew. Some people also attribute multiple births in Igbo-Ora to the eating of yams and cassava. However, Ekujumi Olarenwaju, a Nigerian gynecologist, begs to differ with these views. He says,

“One of the plausible reasons is the hereditary aspect of it because maybe over the years they inter-marry, they now have that gene being pooled and concentrated in that environment”.

But women who sell okra leaves in the Igbo-Ora market still hold on to their traditional beliefs. Oyenike Bamimore, a woman from Twin Town told Reuters that, “Because I eat okra leaves a lot, I gave birth to eight sets of twins.”

The captivating story of Halima Cissé’s pregnancy has triggered new debates about multiple births in Africa. Most importantly, her successful delivery of nine babies demonstrates that African doesn’t have a poor health system as portrayed in western media. Halima Cissé was flown to Morocco where she was taken care of until delivery. All her nine babies are alive and well.