Over the years, African fashion has evolved. However, this evolution has its roots in the dynamism of Ankara. The fabric is fluid, blending into diverse occasions, and can be formed into various designs. It is colorful, lighting up many occasions across Africa. However, this beautiful textile used in making African wax prints did not originate in Africa. It was first produced in Indonesia in 1846 by a Dutch entrepreneur—Pieter Fentener. Since then, Ankara has found its home in Africa.

Celebrities have a great influence on the fashion world. Thus, many people make fashion decisions based on what their favorite celebrity is wearing. Many African actresses have mastered the art of creating eye-popping designs using Ankara fabric. The fame and followership they enjoy make them trendsetters. Many of these designs have come to define the way the world relates to African fashion. Below are 15 unforgettable Ankara styles by 15 African actresses. 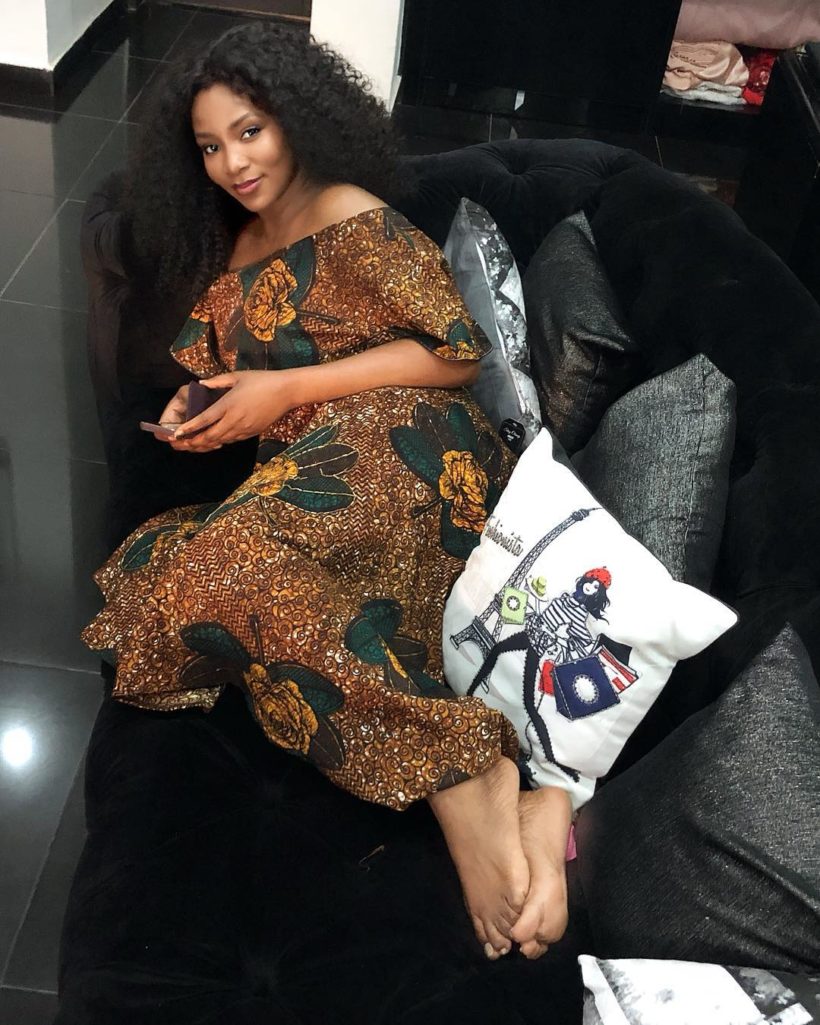 Genevieve remains one of the favorite and outstanding actresses to come out of Africa. In 2005, she became the first actress to win the Africa Movie Academy Award for Best Actress in a Leading Role. She is also a producer and director who came very close to the Oscars nomination in 2018. The reason she is widely loved by her fans is not far-fetched. First is the grace she exudes in her movies. Secondly is her impeccable fashion sense and passion for fitness and activism. 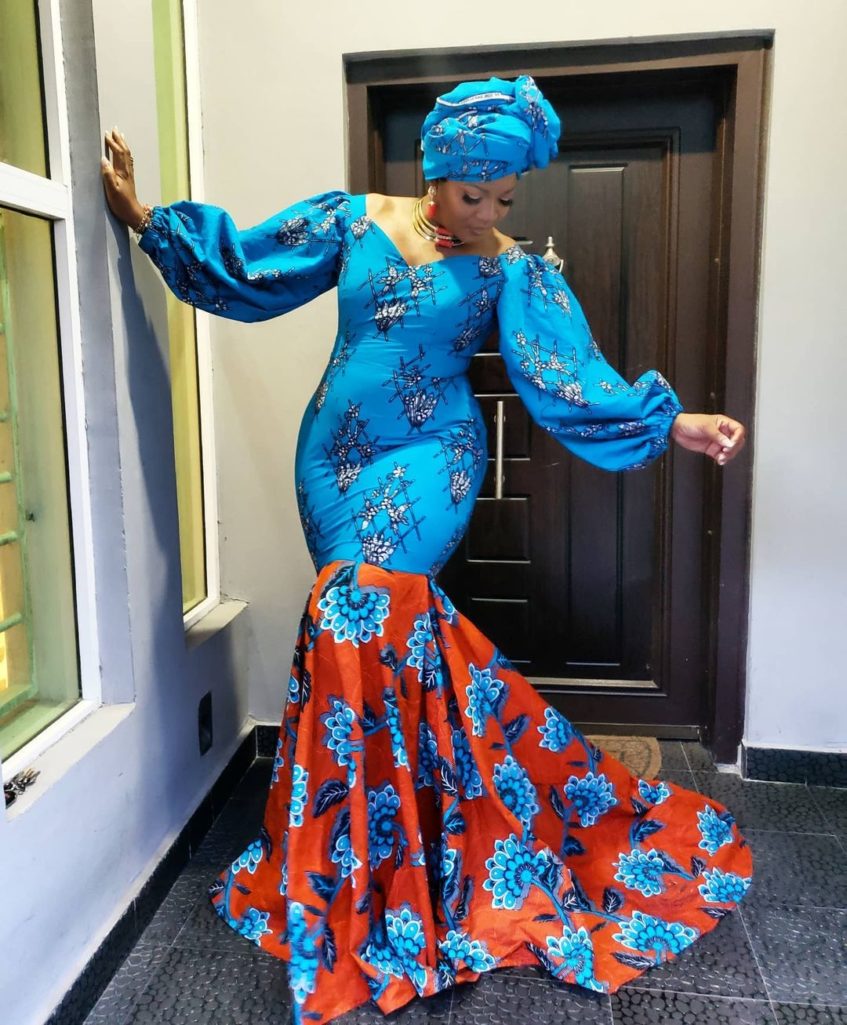 Omotola is one actress who makes acting look like a way of life. It seems to come to her so easily. From her everyday carriage to her interpretation of her movie roles, Omotola is a household name in Africa and beyond. She has featured in over 300 movies. Yet, beyond her acting career is a dress sense laced with creativity and innovation. Take a look at how she rocked this figure-eight Ankara dress with balloon hands. Although the dress is a combination of two different fabrics, the glamor it exudes is breathtaking. 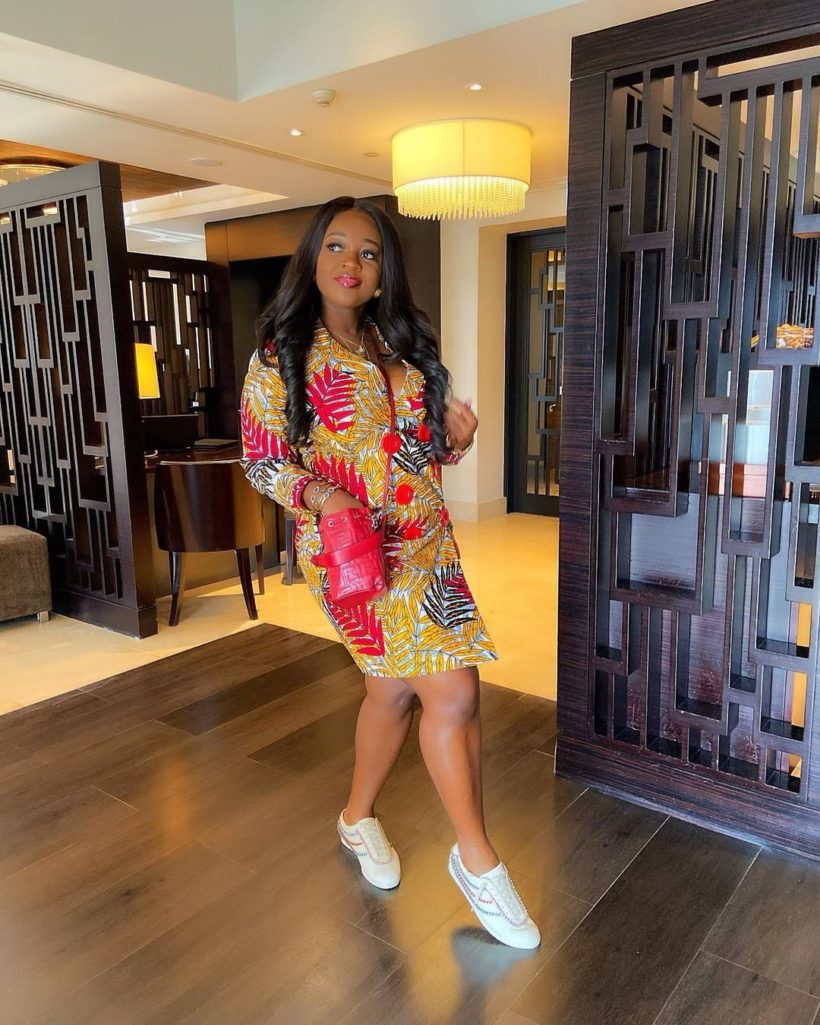 This delectable Ghanaian actress is someone whose face has delighted African movie lovers for years. Her fans love her for her top-notch interpretation of her roles in movies. In 2007, she won the Best Actress in a supporting role at the Africa Movie Academy Awards. She stands tall in the industry, not just for her talent but also for her fashion sense, check out this lovely Ankara design she stepped out in. Isn’t she lovely? 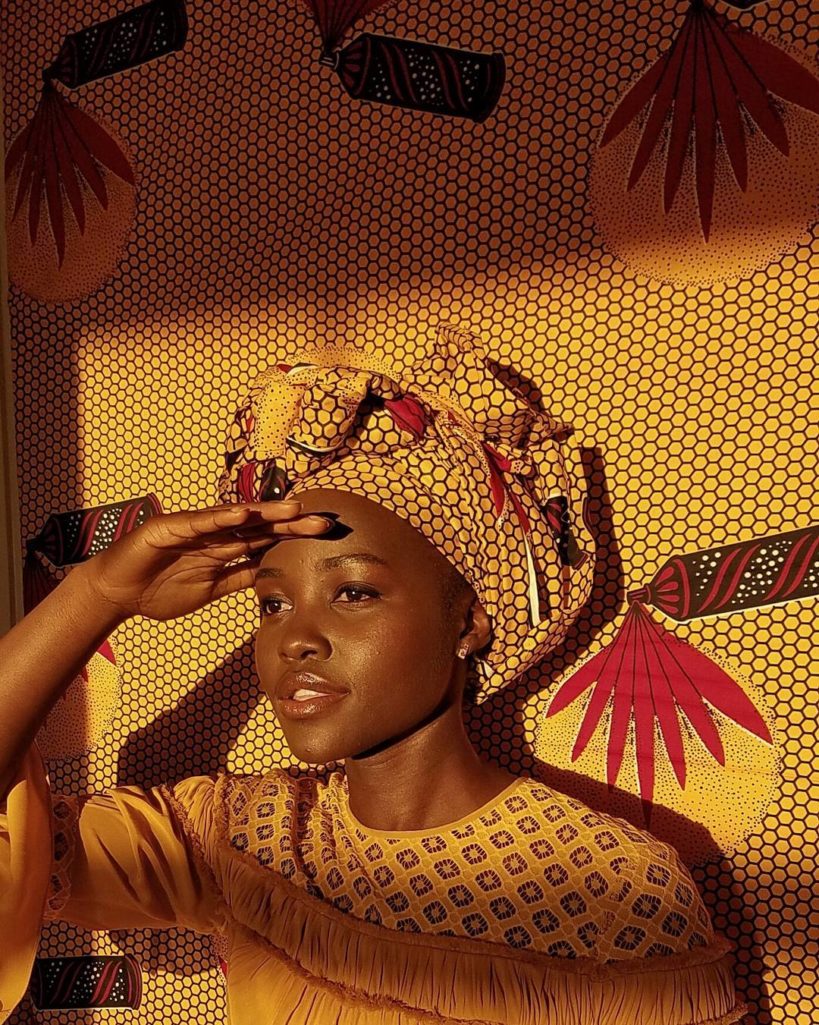 This super talented Kenyan-American actress has been the inspirational face of exceptional and resilient performance in the many movies she has featured in. Her acting career started in 2008 with a short film titled East River after she graduated from Hampshire College in the United States. She is one of the few African actresses making Africa proud in Hollywood. See how beautiful she looks in this Ankara outfit. What’s your thought about her headgear? 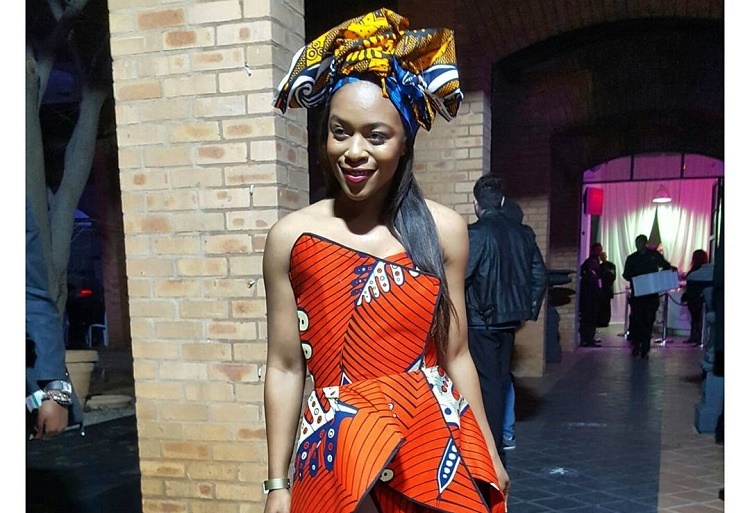 This beautiful South African actress and humanitarian who recently featured in Coming to America 2 is a household name in the South African movie space. However, her role in Coming 2 America will likely be her ladder to greater heights. Here is one moment when she blew her fans away with this Ankara outfit. 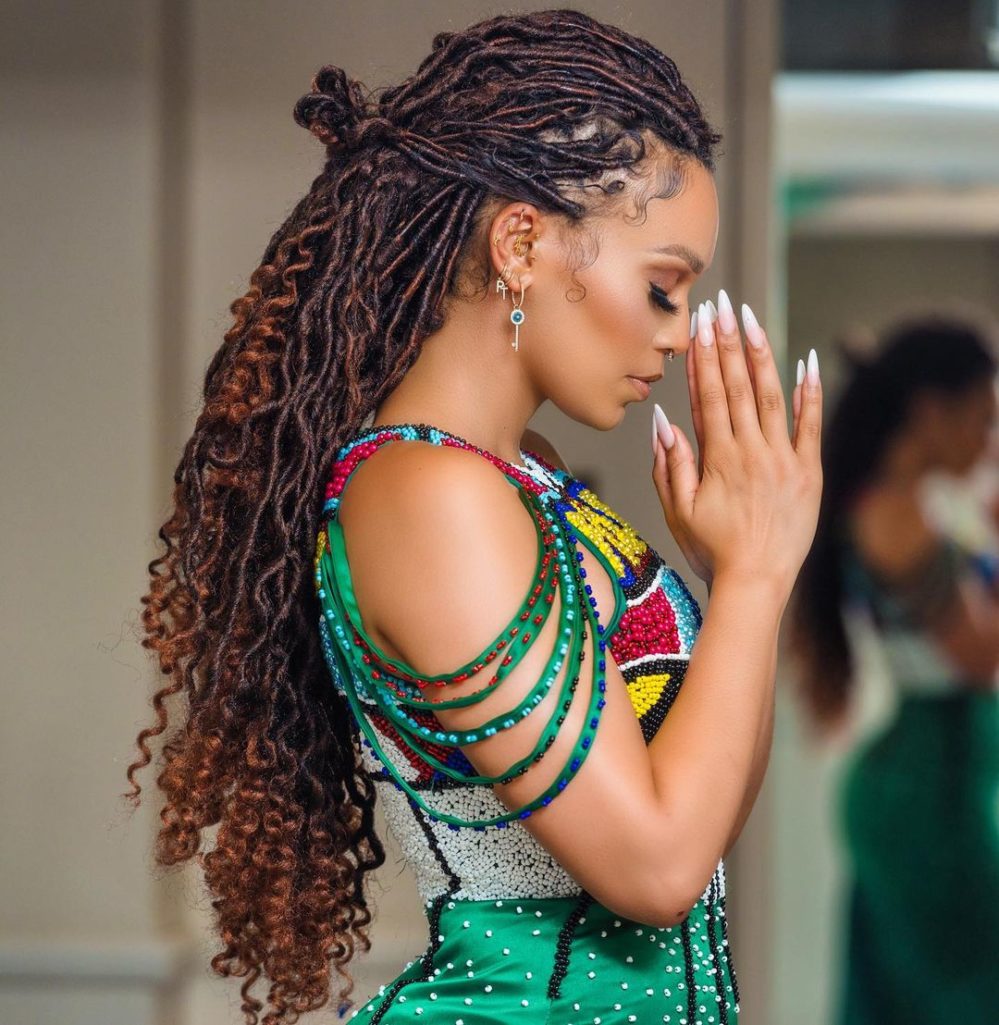 Here’s another South African actress who is making waves in the African movie space. She is a model, radio presenter, and TV host.  Some of her elite movie features include Tremors 5, Bloodlines, and Quantico. As a model, she always stands out with her style, especially when she steps out in a stunning Ankara outfit. 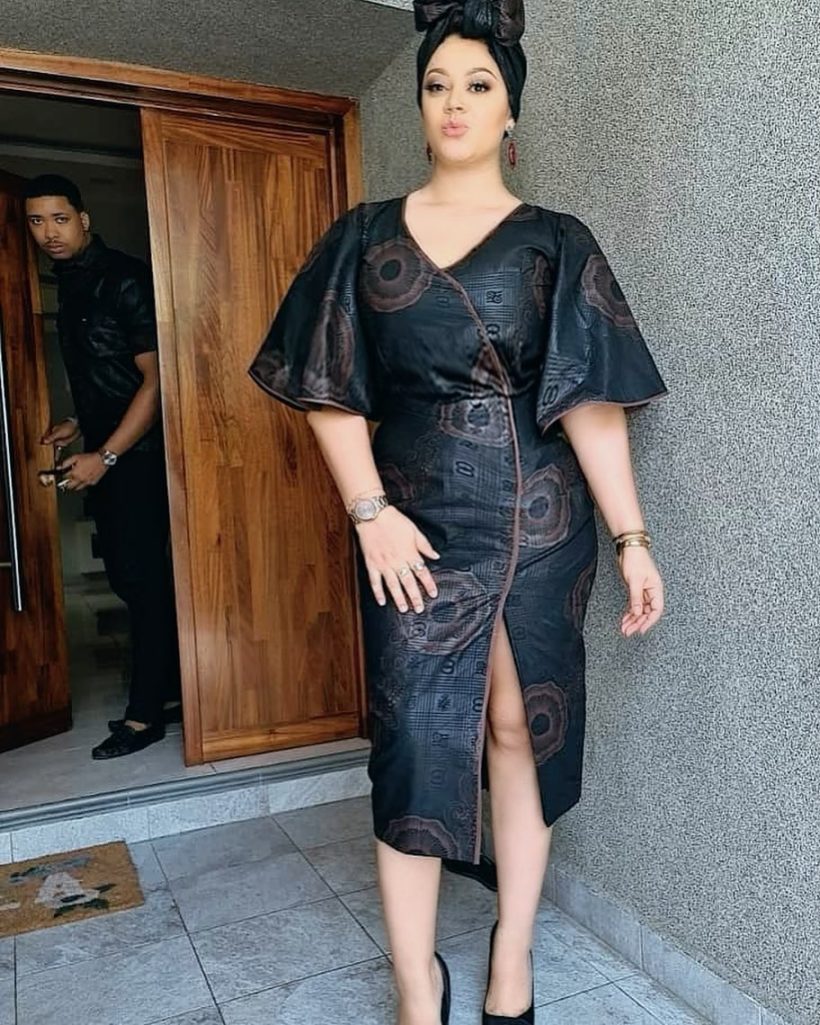 Meet this talented Ghanaian actress who has become a household name in Africa. She has made appearances in over 40 movies and nominated two times as Best Actress in a Leading Role at the Africa Movie Academy. Her beauty and her fashion style have one thing in common—they leave you breathless! 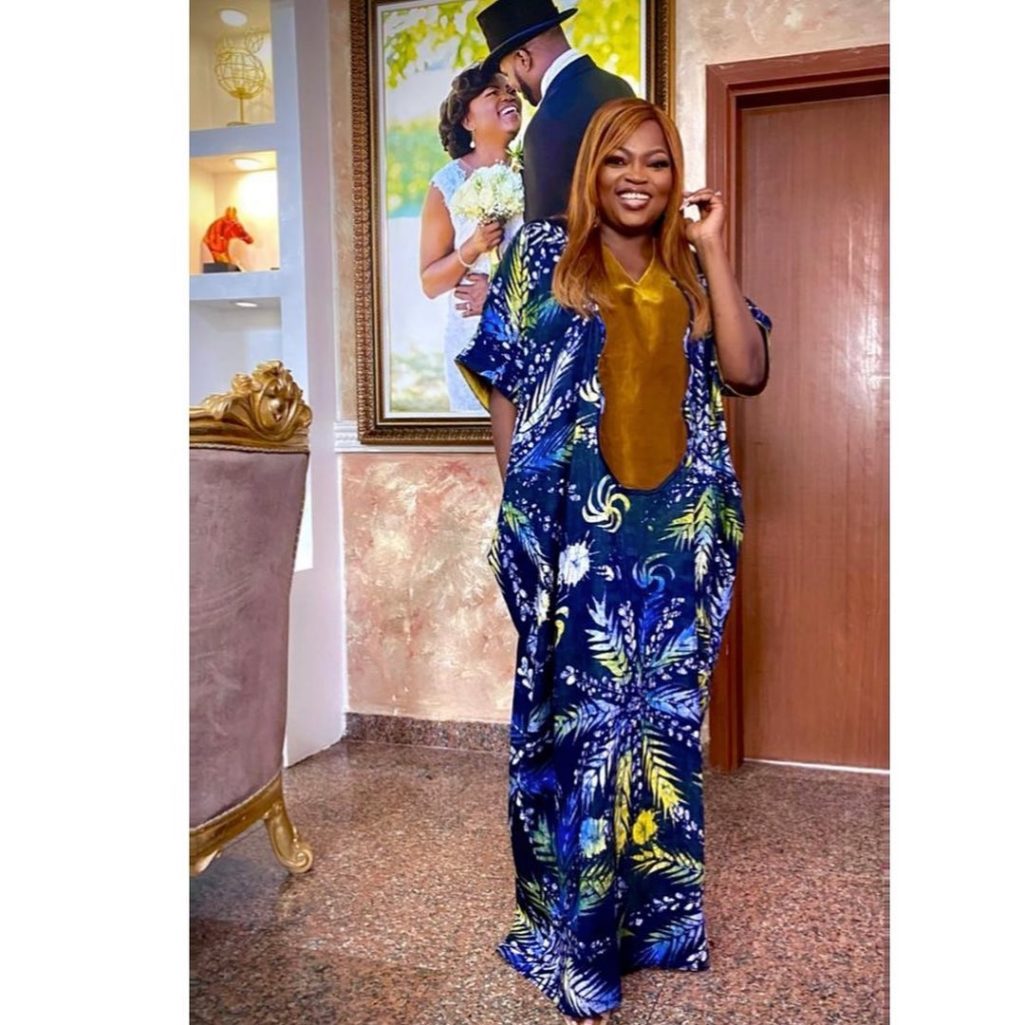 This super-talented Nigerian actress is one of the queens of the African movie space. Her rise to stardom began from the TV series, I Need to Know where she was starred as Bisi. Since then, she has become a popular face in Nollywood. One of her biggest wins is the Africa Movie Academy Award for Best Actress in a Leading Role. With 13.2 million followers on Instagram, she is arguably the most influential African actress on the platform. Funke Akindele who is popularly known as Jenifa by her fans is both an actress and a producer. Her fashion sense is a whole new chapter. 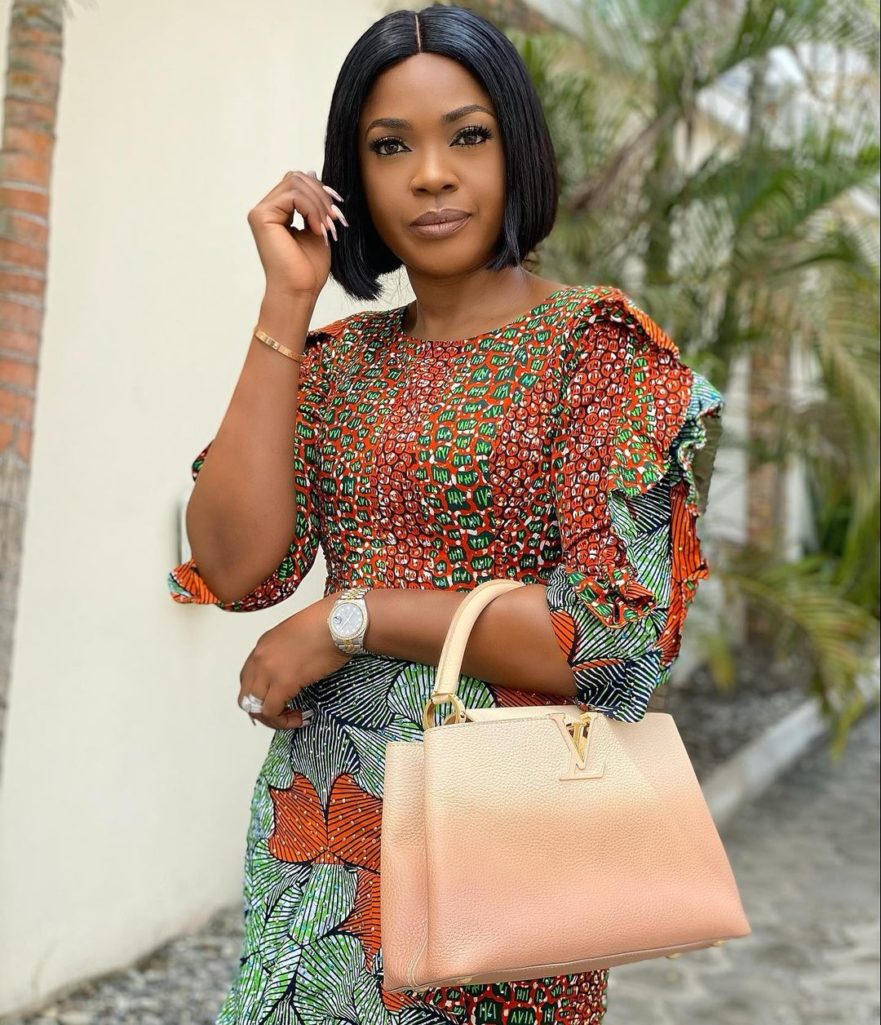 A Beautiful Ankara with a Handbag to match (Photo Credit: Omoni Oboli Instagram)

Omoni Oboli is a Nigerian actress, director, scriptwriter, producer, and the CEO of Dioni Visions Entertainment. She is a household name in Africa and an alumna of the New York Film Academy. Her acting portfolio cuts across over 20 movies. The beautiful Ankara dress she rocks in this picture gives us a glimpse of her fashion sense. 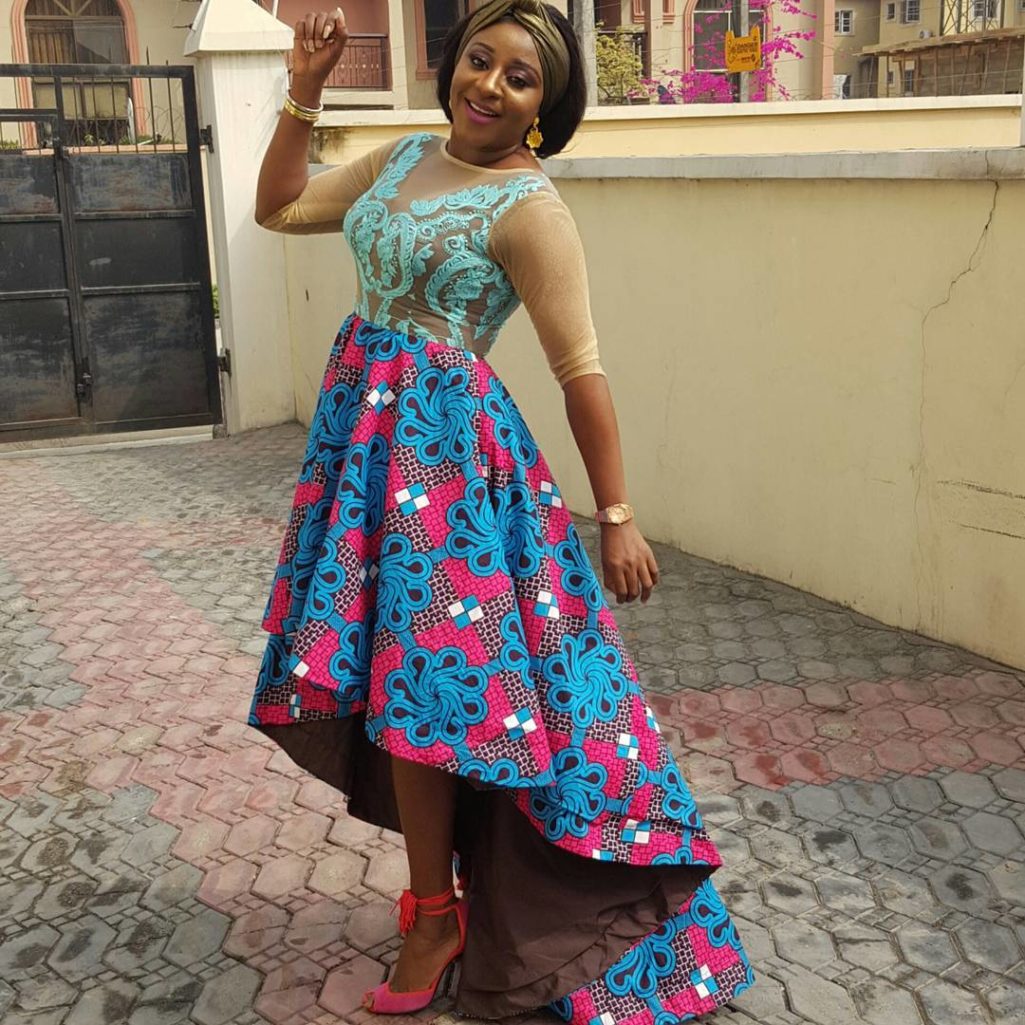 This beautiful Nigerian actress has been gracing the African movie space since the year 2000. With over 100 movies under her belt and 11.3 million followers on Instagram, Ini Edo is loved by her many fans. Her role in movies has made her a household name, but more importantly, Ini Edo sets the fashion pace for her fans to follow. Take a look at this beautiful Ankara outfit. The pleat-tail gown combines with lace to give a stunning appearance. 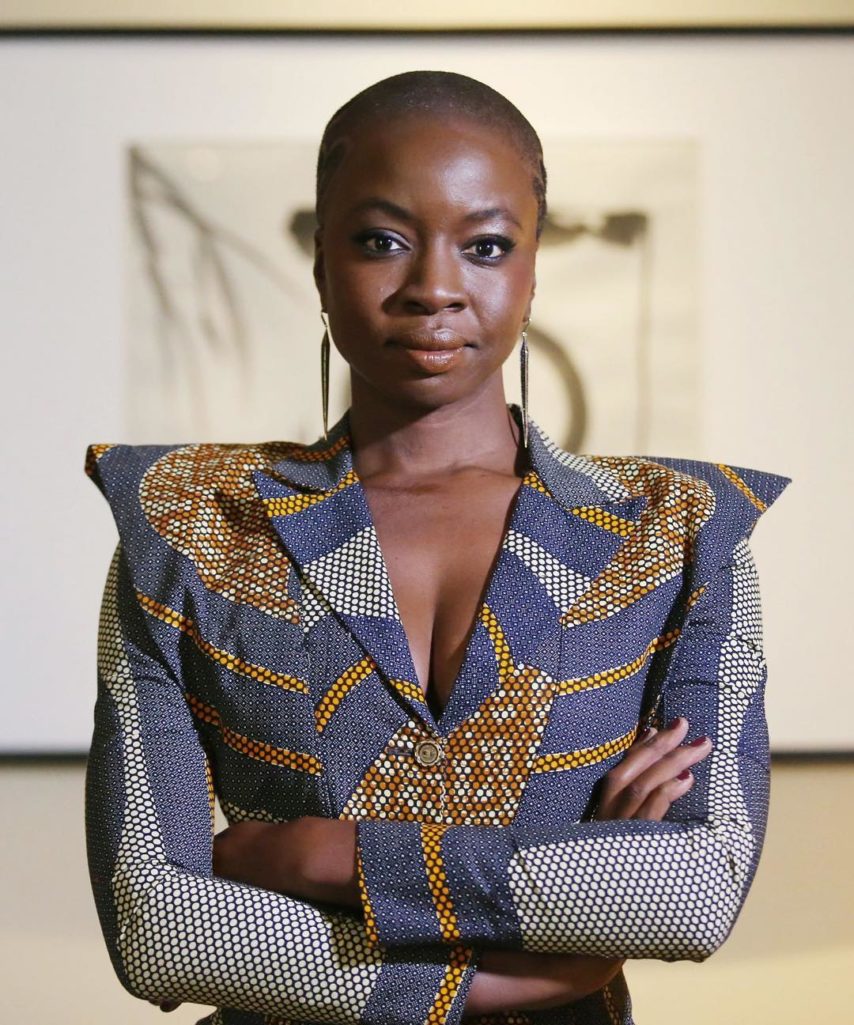 This Zimbabwean-American actress and playwright love to address African issues through movies. Aside from being popular for her role in various big movies like Black Panther, Avengers: Infinity War, and Avengers: Endgame, she is also an activist who is particular about raising young people who understand the role of movies in shaping the next generation. In this picture, she rocks a V-neck jacket with ninja-like shoulder spikes. 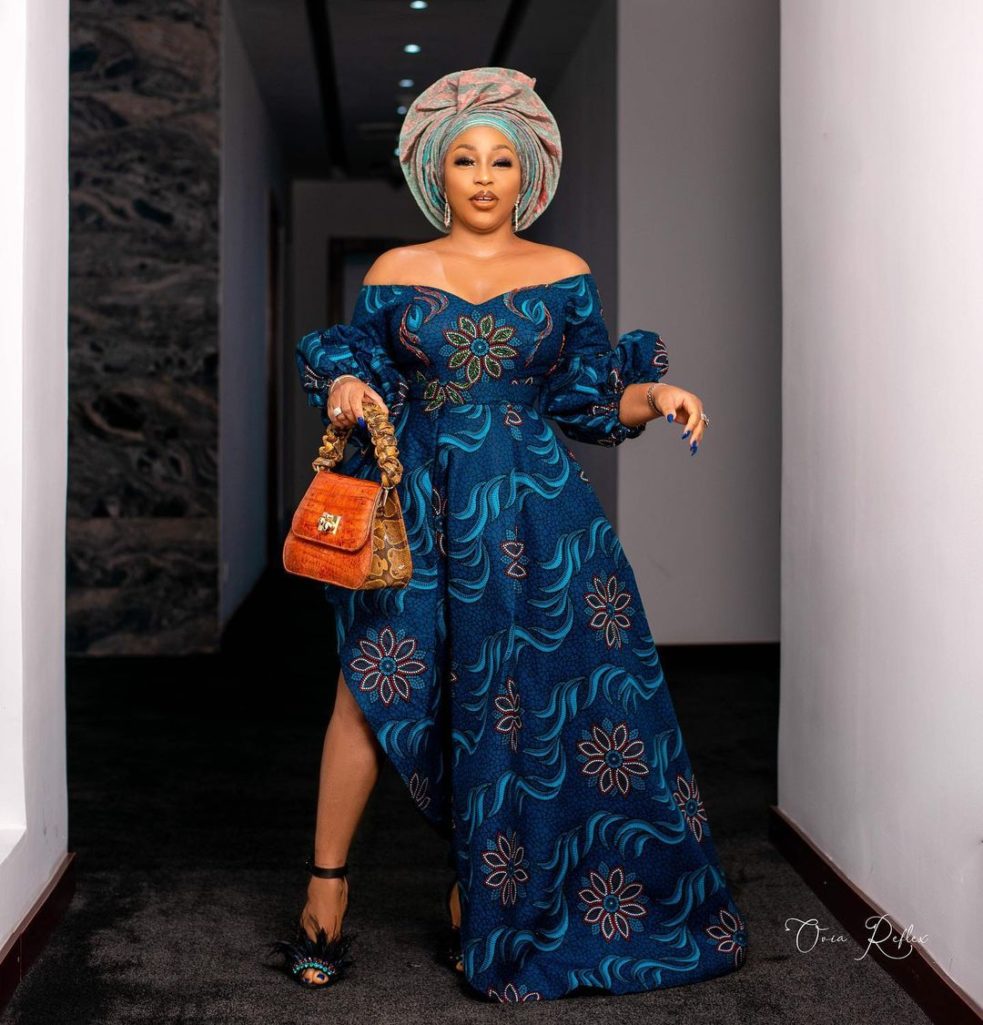 This award-winning actress is one of the most famous faces in Nollywood. She is one actress and producer who has been serenading lovers of African movies for a long time. This talented actress has featured in over 80 movies. Besides movies, she also shows off her creativity in her fashion sense. Her Instagram page is crawling with stunning pictures of her in African prints. 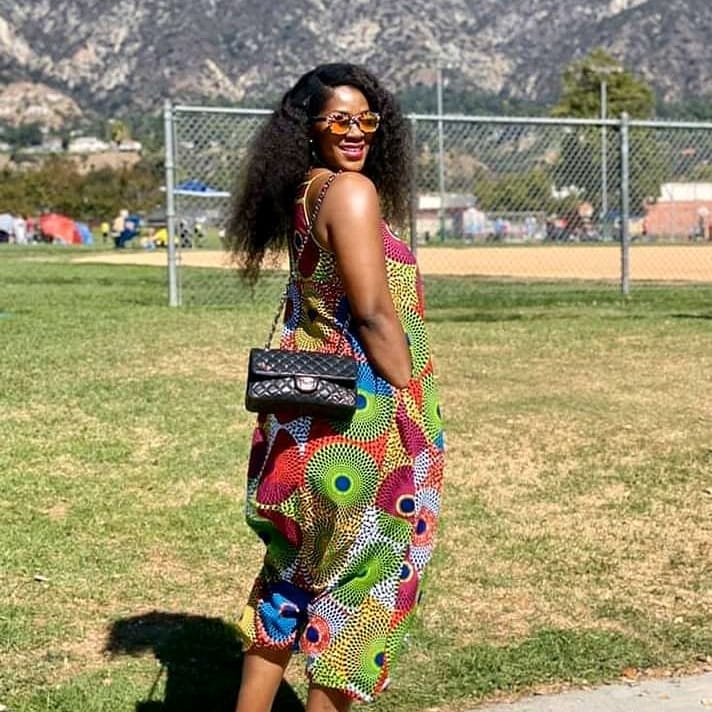 This beautiful actress has featured in over 100 movies with several awards to her credit. She is one of the most respected names in the African movie space. Her dress sense is amazing and this Ankara design gives you a sneak peek into her awesomeness. When last did you see an Ankara jumpsuit? Stephanie pulls this off in a way that makes you want to give it a try. 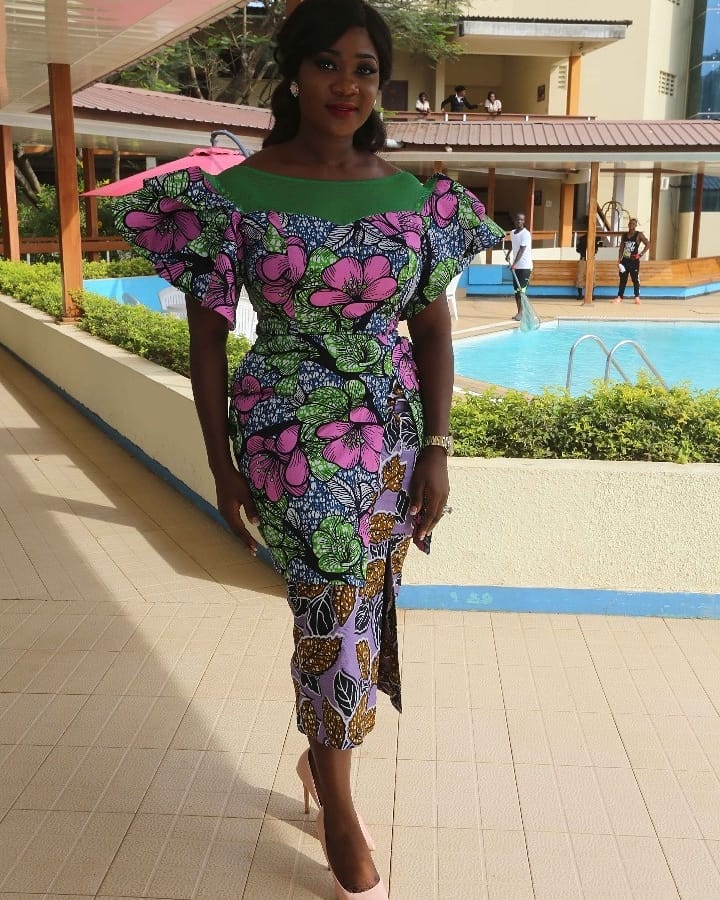 This popular actress has made many of her fans love her through the beautiful interpretation of her movie roles. She has featured in more than 100 movies. In 2013, she won the Best Actress award in the Africa Magic Viewers Choice Award for her role in Dumebi the Dirty Girl. With 10.3 million followers, Mercy Johnson has a stake among the most influential actresses on Instagram. When it comes to her fashion sense, she knows how to give you a slice of awesomeness. Here, she transforms a simple Ankara into a figure-hugging gown with step shoulders. 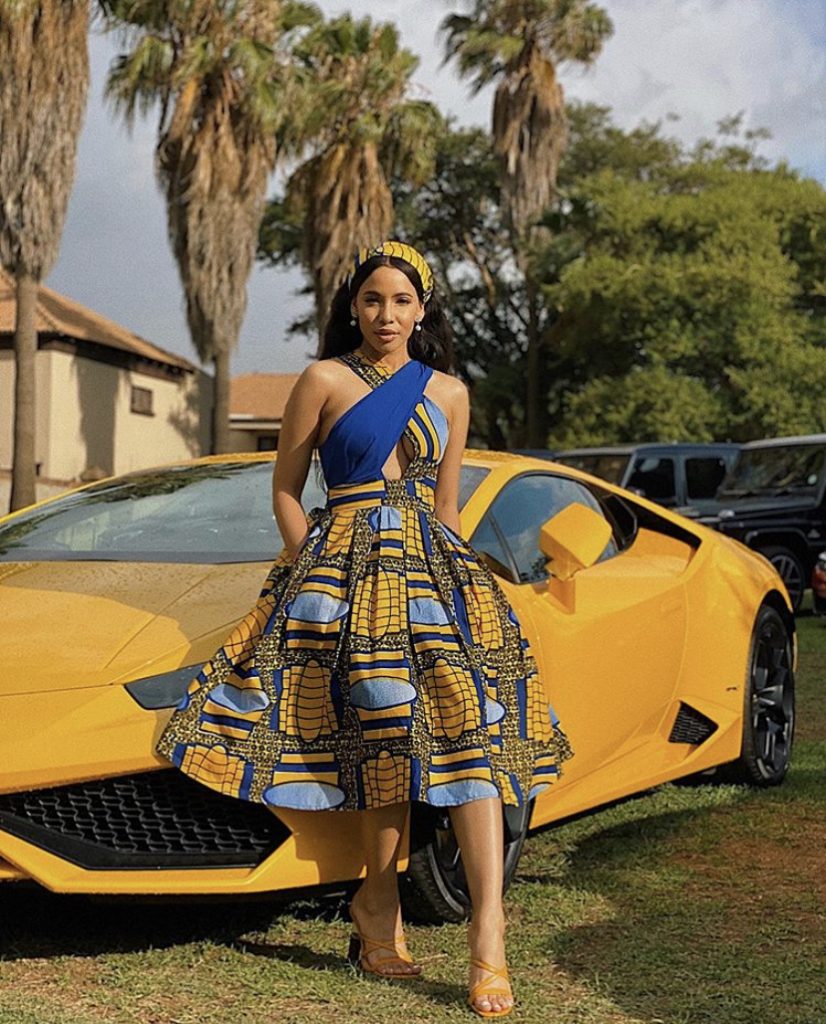 Here is a fast-rising South African actress who started her acting career with a role as Zama in the movie Tshisha. Subsequently, she began to get more roles. She has acted in many other movies and worked as DJ for a while. Her versatility expresses itself profusely in her acting, DJ-ing, and fashion. Here she rocks a seductive halter neck Ankara outfit that exposes part of her cleavage. Try not to stare too hard.

The beauty of Ankara is its versatility, flexibility, and creativity of the producers. We commend these actresses for subtly promoting the fabric. It is time for Africans to embrace African creations. Consequently, it will help to create jobs, fight unemployment and grow the economy. So, which of the actresses on our list is your fashion icon? Share your thoughts in the comment box below.