Afronista Spotlight: Did You Know This Famous Hollywood Star Is From Algeria?

Fashion Afronista of the Week

She is a dancer, a model and, you got it right, a famous Hollywood actress. But did you know that Sofia Boutella of the famous Mummy Film is from Algeria? Well, sit back and enjoy since today’s Afronista Spotlight is on this amazing Hollywood star born right here at home, Africa. Let’s get to know her upbringing, career journey and contribution to the fashion industry and to the entire African society. 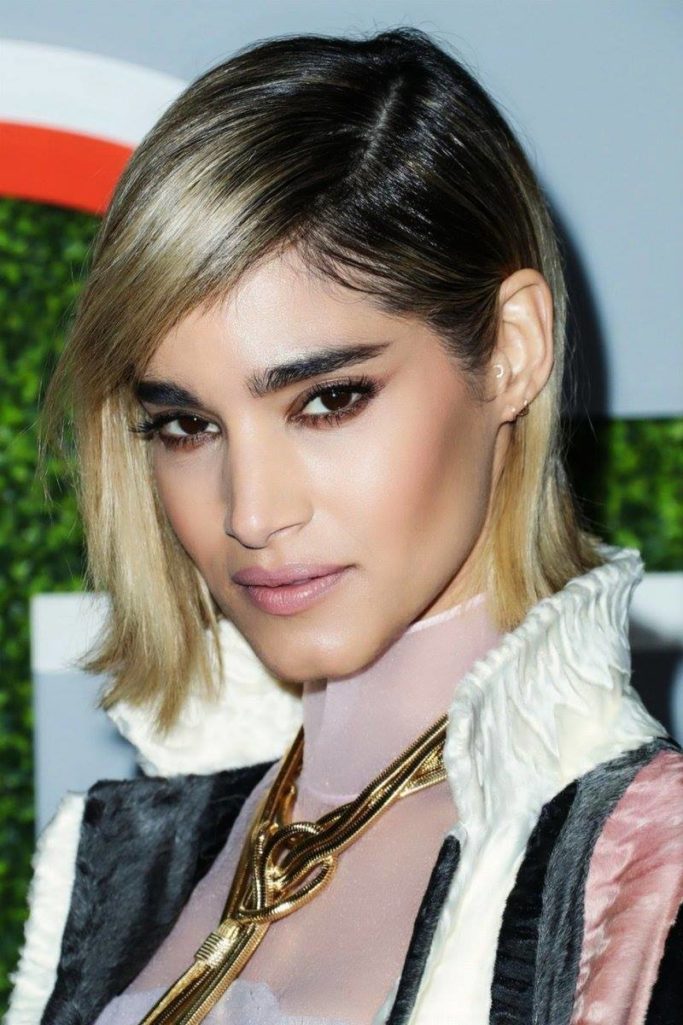 A Peek at Sofia Boutella’s Background

Sofia Boutella was born on April 3rd, 1982 in Algeria, Africa. Her mother was an architect and her father a jazz musician. Interestingly, her only brother and sibling is also in the entertainment industry and works as a visual effects artist.

Her entire family is artistic and creative so to say. This helped in honing her creativity and artistic expression from a young age. In her words, childhood was a happy one, and she felt “blessed to be born into a family that allowed her to express herself, to be herself and let out all sorts of colors that were living in her imagination and heart”.

Although she was born in Africa, Sofia and her family moved to France in 1992 due to the Algerian civil war that broke out at the time. However, her career as a dancer started blooming in France.

Having been born to Algerian parents, Sofia Boutella is also of Algerian ethnicity. However, since she was brought up in France, she has French-Algerian citizenship. For a long time, her ethnicity has not been clear to most of her fans and this is what she had to say.
“I don’t fit in any box.  People don’t know if I’m Indian, half-white, half-black. Sometimes they think I’m Brazilian!”

What Is Sofia Boutella Net Worth?

From her successful career engagements as an actress, dancer and model, Sofia Boutella has managed to amass a substantial amount of wealth. According to Celebrity Net Worth, Sofia’s net worth is approximately $4 Million. Some of her wealth is from her contracts on advertisement campaigns with Nike. 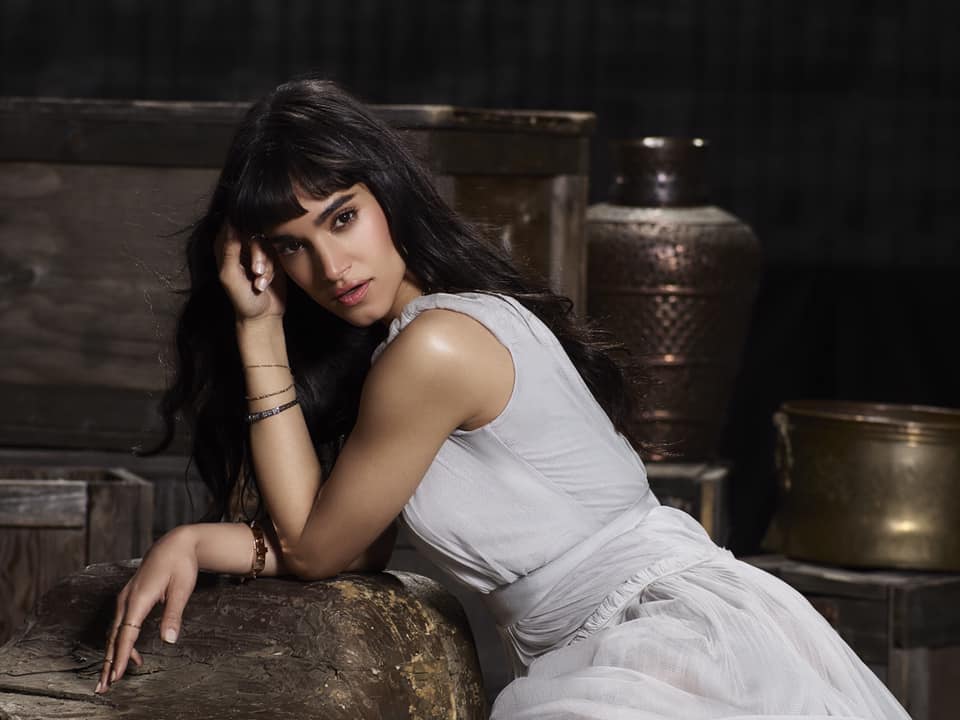 Her Career Highlight And Achievements

Sofia’s dancing career began when she was just a young girl. At five years, she knew she wanted to become a dancer. Her family encouraged her to pursue her dream and she enrolled for classical dance education in Algeria. When she was 18 years old, she started rhythmic gymnastics and joined the French national team. Her notable achievements as a dancer led her to work with stars like Michael Jackson in ‘This Is It’ concert, Madonna in ‘Confessions Tour’ and Jamie King for Women’s “Keep Up” campaign by Nike.

ALSO READ: Afronista Of The Week: What Is Queen Of Sono Star Pearl Thusi Up To

Interestingly, Sofia Boutella perceived her dancing as some kind of ‘acting’. This gave her the stamina to venture into the film world after 12 years as a successful dancer. Her acting star started shining in 2015, when she got a major role in ‘Kingsman: The Secret Service’ film.

Over the years, she has acted in numerous successful and famous films like ‘Star Trek Beyond’, as Jaylah the Alien Warrior, and as the Mummy in the famous film by the same name. She has worked alongside other famous actors and actresses like Tom Cruise, James McAvoy, and Annabelle Wallis among others.

Outside the screen, Sofia has a unique fashion style that is both glamorous and charming. She easily steals the show whenever she makes an appearance on the red carpet. Below are some of her most iconic styles. 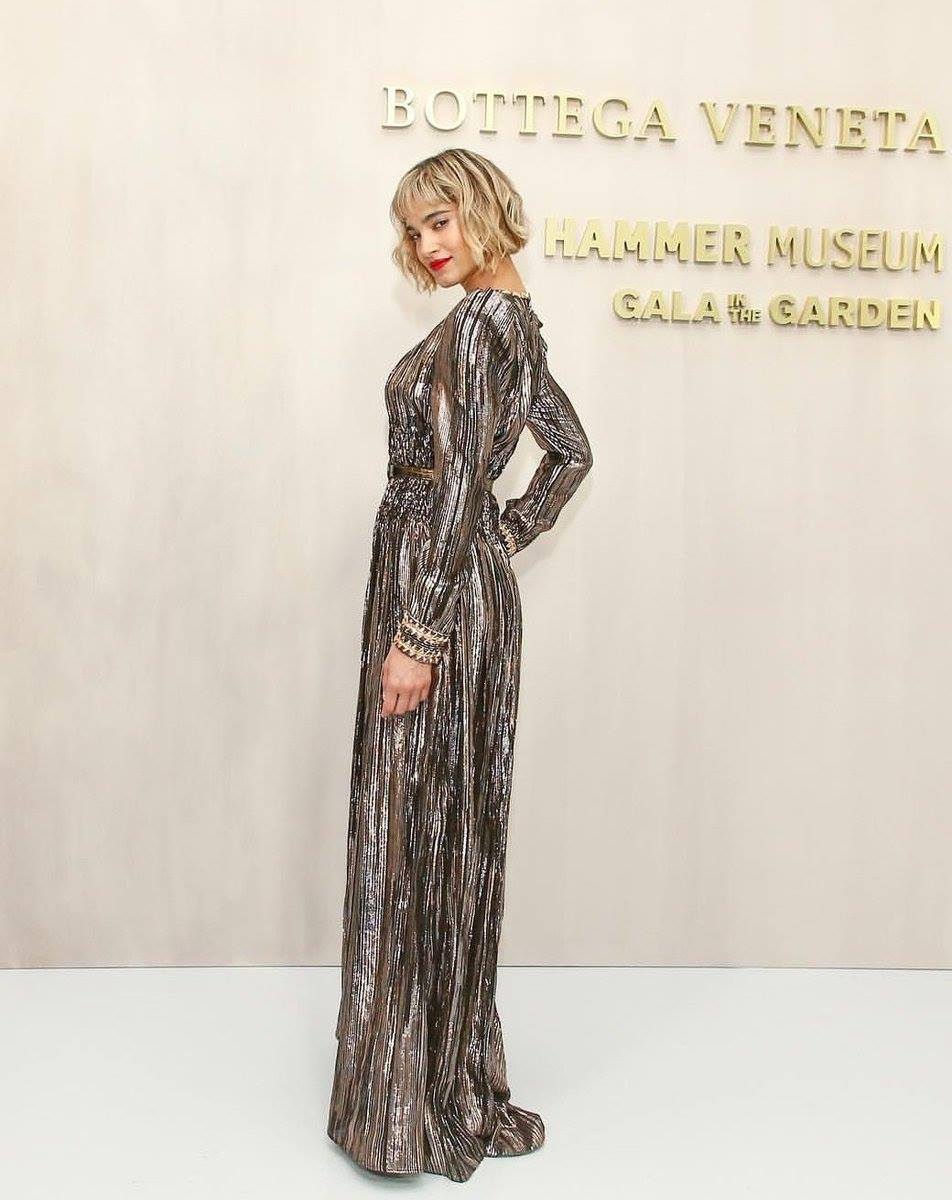 Is the evening party just around the corner and you haven’t figured out what to wear? This shiny silvery evening gown is the best choice. The long sleeves will shield you from low temperatures witnessed in the evenings. The belt and decorations on the hems of the sleeves give the outfit a perfect finish. 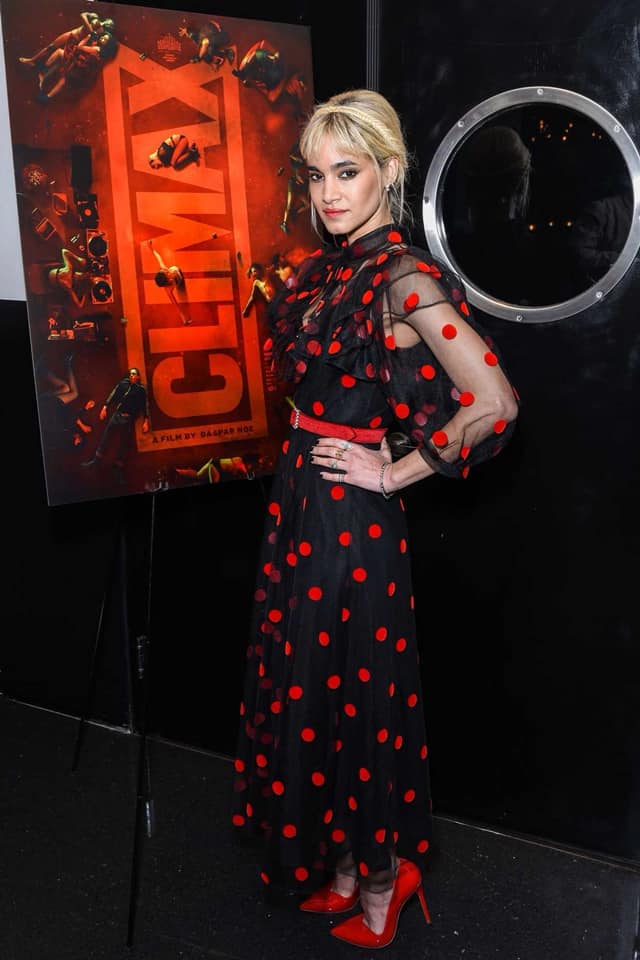 The red polka dots on this beautiful black dress is the real deal. As if that is not enough, the red heels accompanied by the red belt sum up the look in a stylish yet glamorous way. The background in the picture does its best to bring out the entire outlook. 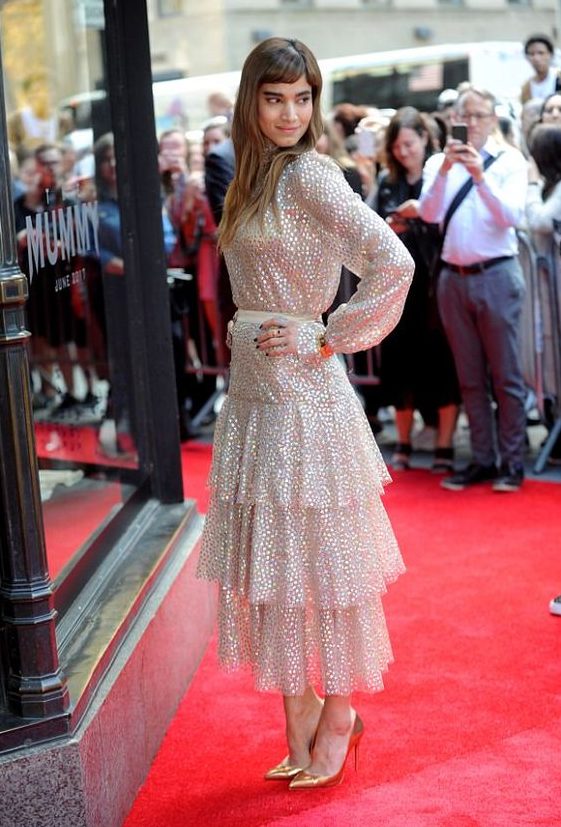 Sofia’s contented facial expression tells it all. The shiny long sleeved dress that she wore during a film promotion in New York City looks so perfect on her. The golden heels do a great job in completing this glamorous and elegant look. 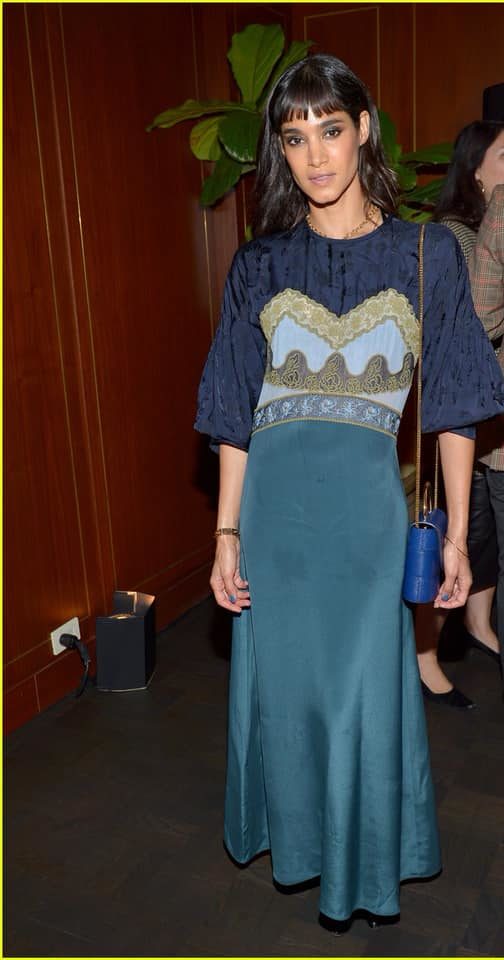 Shades of blue color are well exhibited in this simple dress worn by Sofia. The intricate decorations on the bodice give the dress a touch of uniqueness. In addition, the small blue bag completes the look. 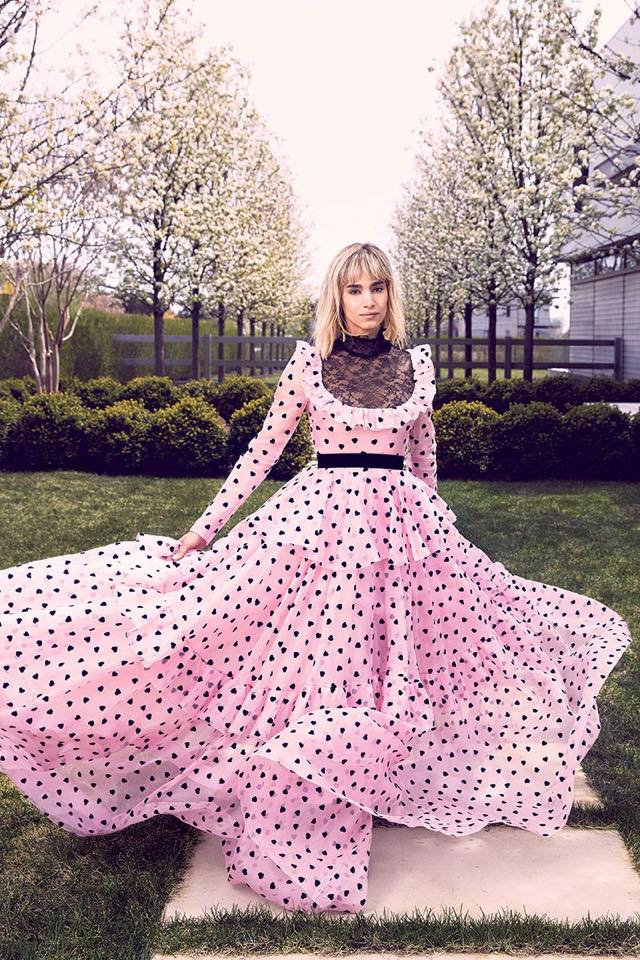 Pink is generally a beautiful feminine color. When black is added to it, the result is mindblowing as showcased in this fairytale hearty dress so to say. The little black heart shapes give the dress a stunning look due to the nice contrast of colors. The black belt and the lacy black decoration on the front part of the bodice take this design a notch higher. 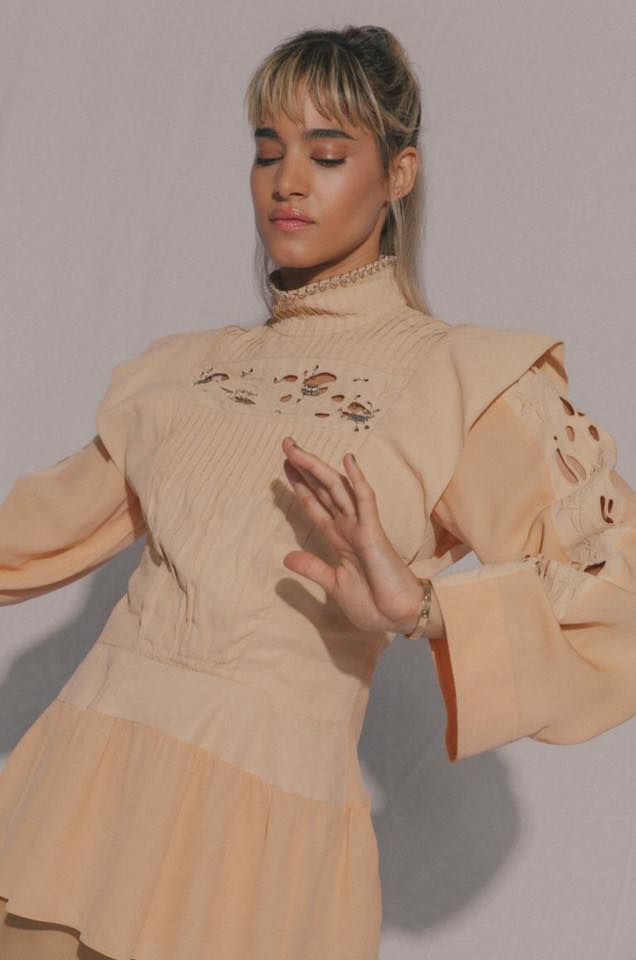 Apart from the alluring beige color of this top, the silver rings on the bodice cannot go unnoticed. They definitely make a bold fashion statement and so does the unique design on the front and on the sides of the sleeves. The flared armholes and the panel on the bottom part of this beautiful top give it a stylish finish. 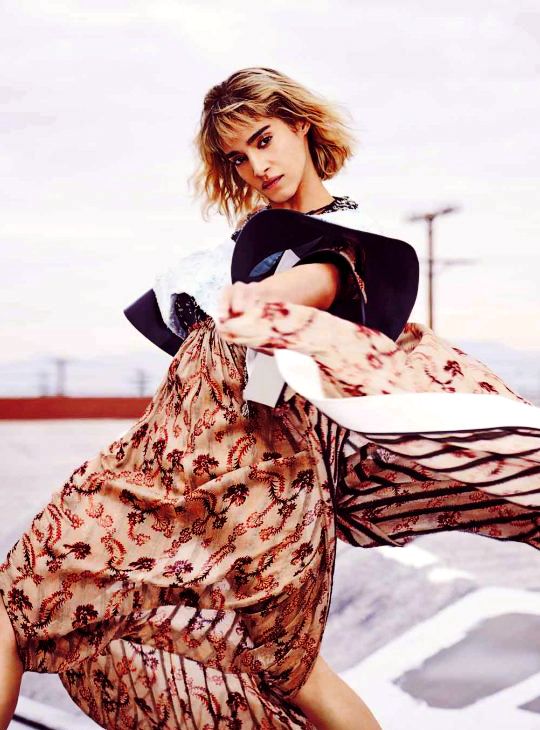 A striking pose by Sofia at April 2018 Harper’s Bazaar in Malaysia showcasing a beautiful brown and black ensemble. Note the flared short sleeves and the unique brown decorations giving this attire an irresistibly chic look. 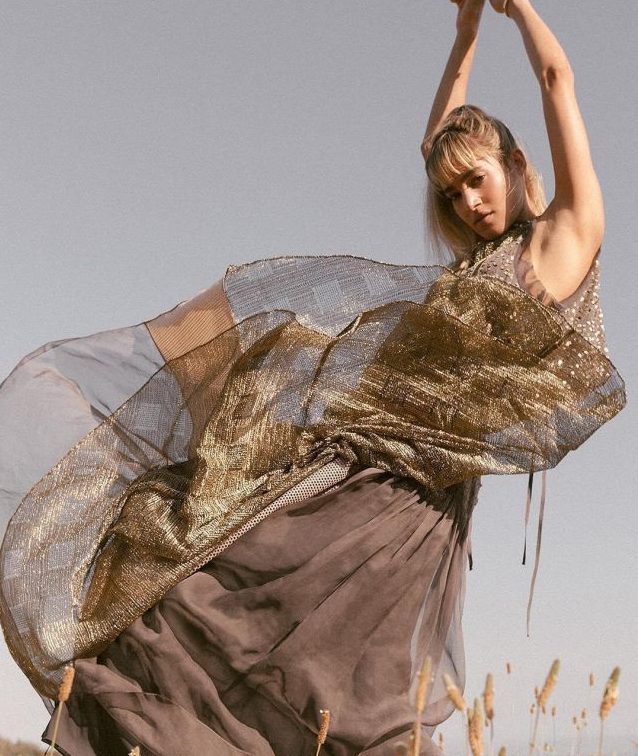 Sofia Boutella’s out-of-the-box pose for this photoshoot adds to the singleness of this embellished brown dress. The brown color in different shades and textures is well presented in this gorgeous garb. The golden sequins on the bodice perfect the design. 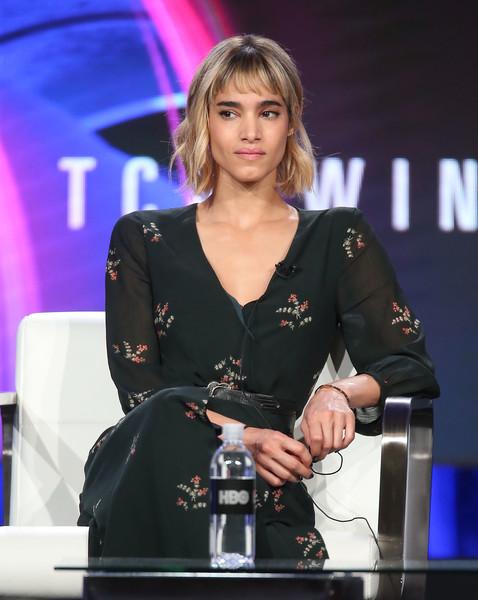 Simplicity meets beauty in this Sofia Boutella black outfit. A splash of unostentatious colorful flower decorations gives the ensemble an elegant feel in a unique way. This garb is ideal for both formal and informal events.

ALSO READ: Designer Spotlight: Rebecca Zoro Talks About Her Journey To The Top 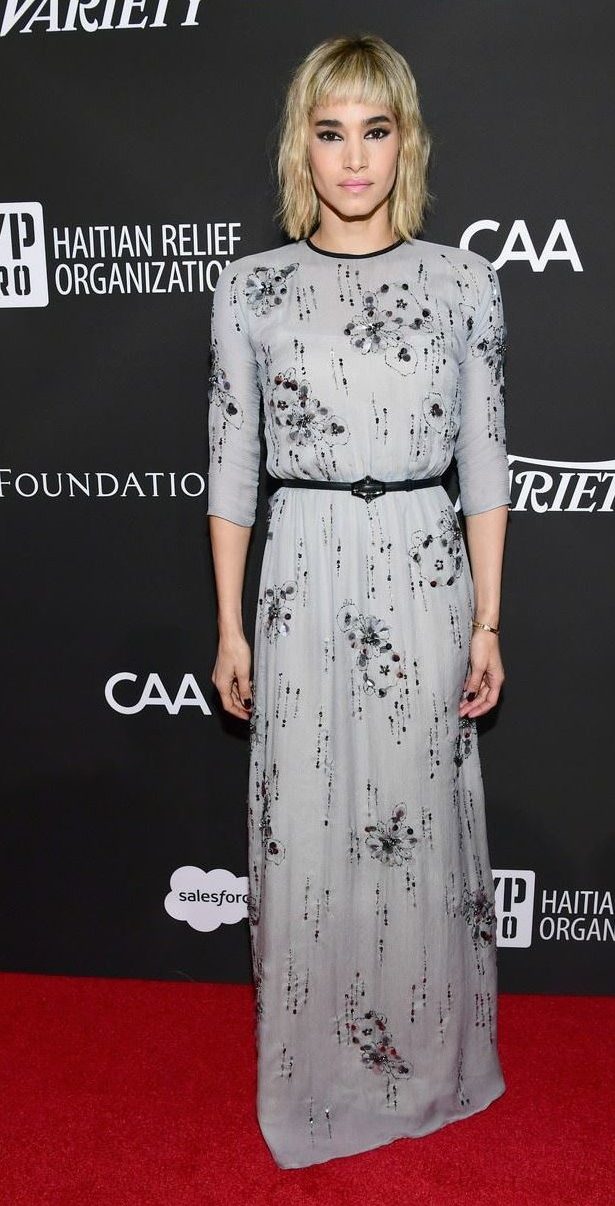 At the Haiti Rising Gala, Sofia looked her best in this simple yet elegant grey maxi dress. The black embellishments on this dress ideal for evening parties add to its beauty. The black belt strapped nicely on her waist completes the outfit. 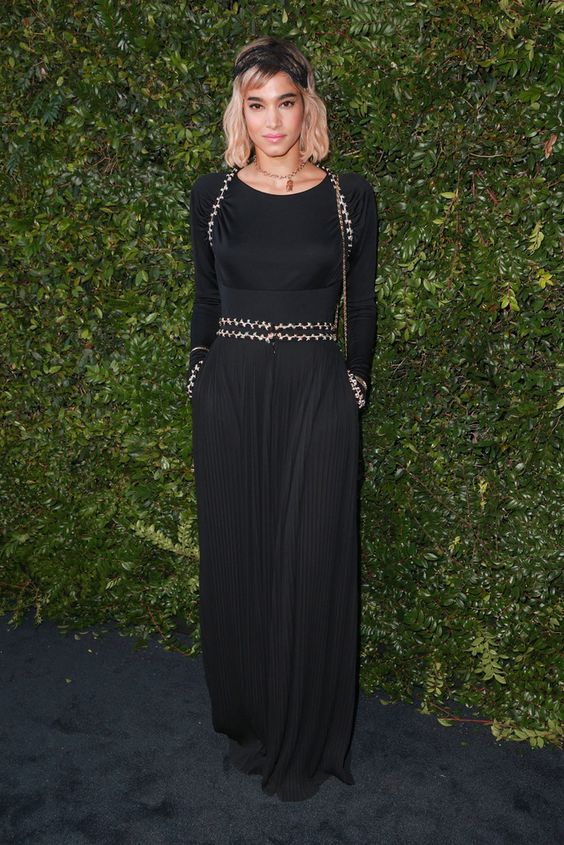 Black as always has never disappointed. It looks great on Sofia Boutella as she attended CAA NAACP Image Awards After Party. The event was held in February 2020 at The Jefferson-Los Angeles, California. The decorations on the bodice, waist, and on the edge of the sleeves give some color to this simple and unique black ensemble.

You can get this modish and stylish look worn by Boutella during the Jameson Empire Awards back in 2015. The blue dress looks great on her and the black shiny floral decorations add to the uniqueness of the design. The black shoes and the clutch complete this outfit which is ideal for formal occasions. 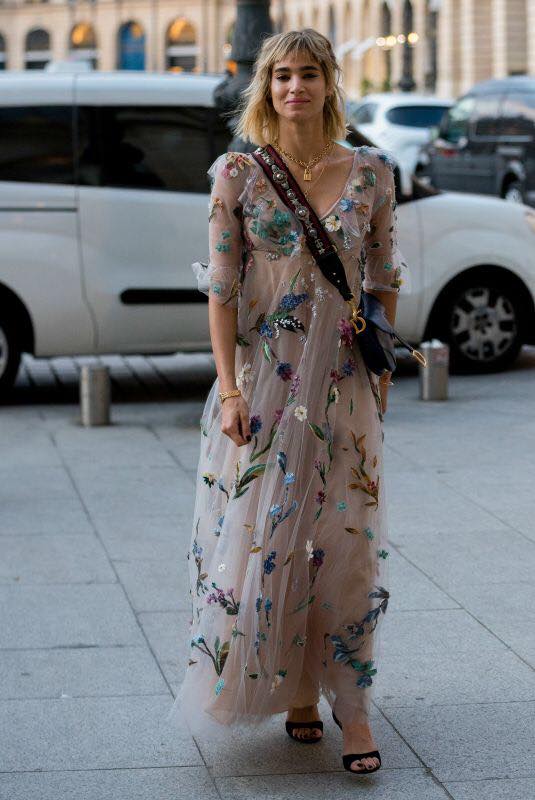 This simple girlish yet unique dress looked so good on Sofia Boutella as she attended  Dior dinner in Paris at Place Vendome. The black bag and heels complement the flowery dress so well giving the whole outlook a stylish touch. The embellishments on the strap of the bag cannot go unnoticed. 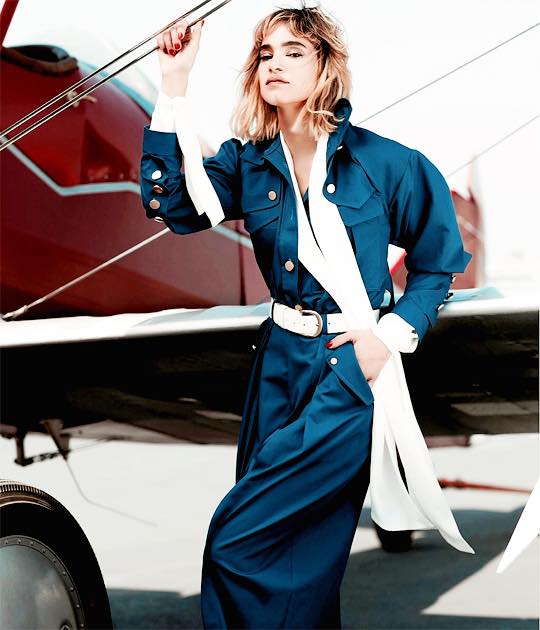 Navy blue and white colors look so good together giving this ensemble a tick. The collar, details on the long sleeves, and the belt all in white color adds glamor to the otherwise simple look. 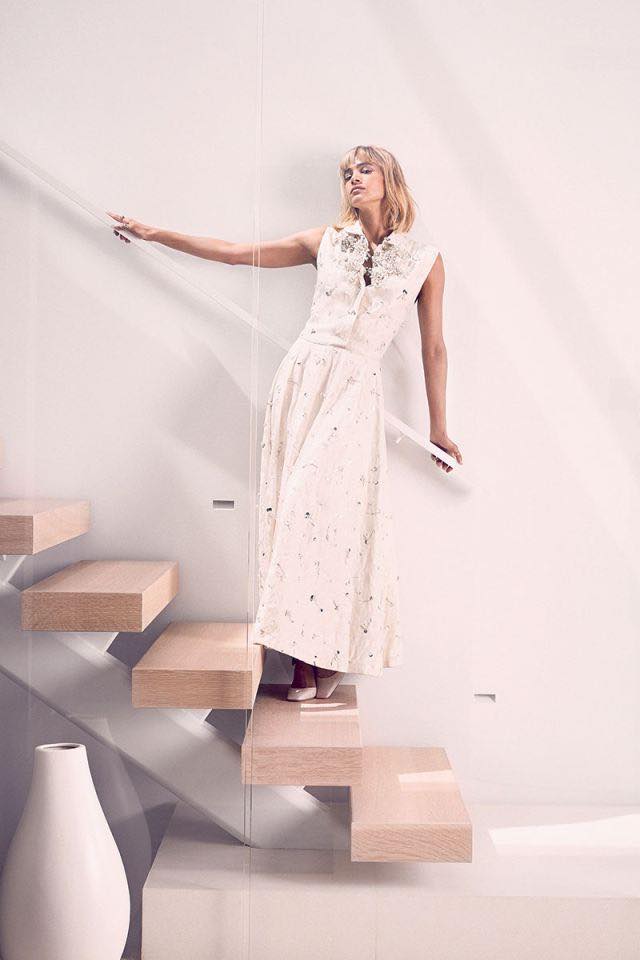 This white maxi dress is a pearl on its own. The small black floral details add a splash of color to the whole attire hence breaking the monotony. Also, the lace decorations on the front part of the bodice givies the dress a nice girlish look.

Sofia’s acting career has been on a trajectory curve ever since she ventured into the film industry. Her recent projects include ‘Settlers’ where she acted as Ilsa and ‘Prisoners of the Ghostland’ where she took the role of Bernice. Currently, she is working on an upcoming miniseries ‘SAS: Rogue Heroes’ which is a historical drama and a creation of Steve Knight. She will act as Eve in the new miniseries.