What African city is most dynamic? JLL’s 2019 City Momentum Index covers 131 major established and emerging markets and identifies cities that have the strongest short-term economic and real estate market momentum.

Although momentum in the global economy appears to have peaked, there are still many cities in the world where both real estate and economic momentum continue to be robust. JLL’s City Momentum Index (CMI) is now in its sixth iteration. This year it focuses purely on short-term momentum over a three-year horizon, tracking a range of socio-economic and commercial real estate indicators to identify attributes for success over the near term. It covers 131 major established and emerging business hubs across the globe.

The Momentum Index rankings identify the urban economies and real estate markets which are currently undergoing the most rapid growth. Cities that are growing quickly tend to punch above their weight in attracting companies and people; however, this can often lead to challenges – such as social inequality, congestion, and environmental degradation – that must be addressed to ensure short-term growth transitions into longer-term momentum. 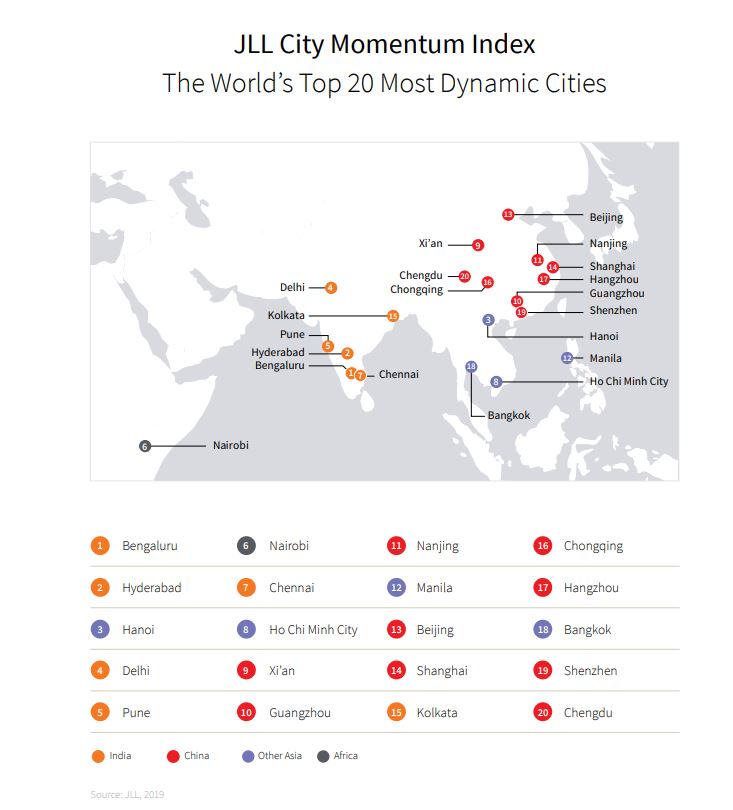 The latest results highlight the East-West growth divide. Asia Pacific is home to 19 of the Top 20 cities in this year’s Index, reflecting the region’s continued rapid urbanization and economic growth. Overall, Indian and Chinese cities dominate the rankings, accounting for three-quarters of the Top 20. Vietnam, the Philippines, and Thailand are also represented. There are no cities in either Europe or the Americas in the Top 20. Only one city outside of Asia Pacific, Nairobi, ranks in the 20 most dynamic cities in the globe; and even in Nairobi there is a powerful Asian
influence with significant amounts of investment from China-focused mainly on infrastructure projects.

A common theme this year is that many of the top performing cities have strong links to the technology and innovation sector. The technology sector is a key driver of both real estate and economic momentum, and is propelled not only by the large dominant tech firms but also by a robust start-up culture. Bengaluru, Hyderabad, Ho Chi Minh City, Shenzhen and Nairobi have all cultivated a thriving start-up culture which has helped to push them up the rankings.

ALSO READ: Luxury Homes in Africa for $1 Million (Or Less)

Nairobi is projected to be one of fastest-growing cities in the world in terms of population over the next five years, and this is matched by very robust economic growth. Innovation is becoming a key part of the economy and Nairobi has developed a specialism in app development. Absorbing this pace of migration is creating some issues.

Nairobi frequently ranks near the top of indices that address congestion; a heavy reliance on cars and buses ensures that traffic jams are a daily problem.
There are plans to improve this through the implementation of the ‘Missing Link Roads’ project along with the creation of three non-motorised traffic routes to ensure inclusivity in infrastructure development.