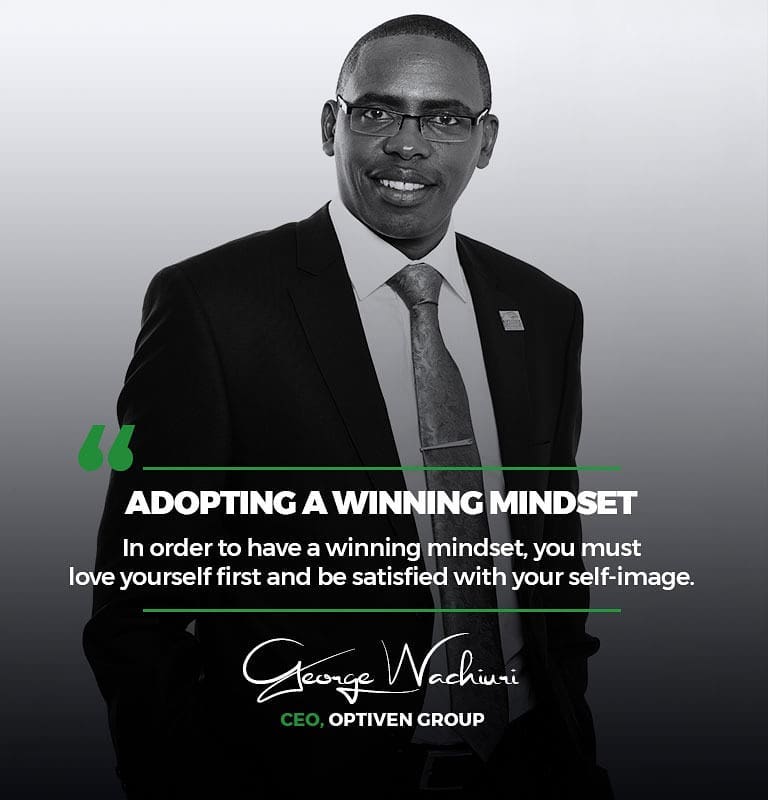 Most times when faced with challenges or when going through painful experiences, we tend to lose hope and motivation. However, that was not the case for George Wachiuri, a Kenyan magnate who literally rose from grass to grace. Being born and raised in abject poverty did not deter him from achieving any dream he set his mind to. Grab your favorite beverage, sit back, relax, and get inspired as we shine our entrepreneur spotlight on this humble businessman.

Wachiuri is a man who wears many hats. He is married to Mary Wacuka and together they have three children. He is also a lecturer, a motivational speaker, a philanthropist, and an author. However, he is mostly known for his sharp entrepreneurial skills and as the founder and CEO of Optiven Limited.

He describes himself as a morning person who likes going out with his children for swimming sessions. He also makes time for his wife and makes sure that they go out for a coffee date once a week. In addition to his love for books, he is also a farmer and an environmentalist.

Growing up for Wachiuri was not a bed of roses. He was brought up in a dry and dusty village called Labura in Nyeri county. Unfortunately, his father passed away when he was still a young boy. To make ends meet, Wachiuri and his siblings would accompany their mother to their well-up neighbors to do manual work on their farms. This, they would do very early in the morning before going to school.

Due to the biting poverty in his homestead and hustles to ensure survival, Wachiuri did not perform well as he had expected in his primary school exam. Sadly, his aspiration to priesthood was tied to getting good grades. So, he re-sat the exams the following year and performed exemplary well. However, he changed his mind when he got an admission letter to join high school.

The desire to change his family status

One day, Wachiuri had an encounter that changed his life for good. When he was seven years old, he got bitten by a snake and was admitted to the hospital for three weeks. It was during this time that he made up his mind to change his mother’s life. He knew he could only achieve this by making lots of money to build her a nice and comfortable house.

It was this desire to lift the living standards of his family that gave him the inner drive to keep pushing harder. He used everything life threw at him to his advantage. To date, the memories of his poverty-stricken childhood make him work harder. On the same line, he uses his foundation, Optiven Foundation, to lift the living standards of other less fortunate families.

A Humble Start to a Successful Entrepreneurial Journey 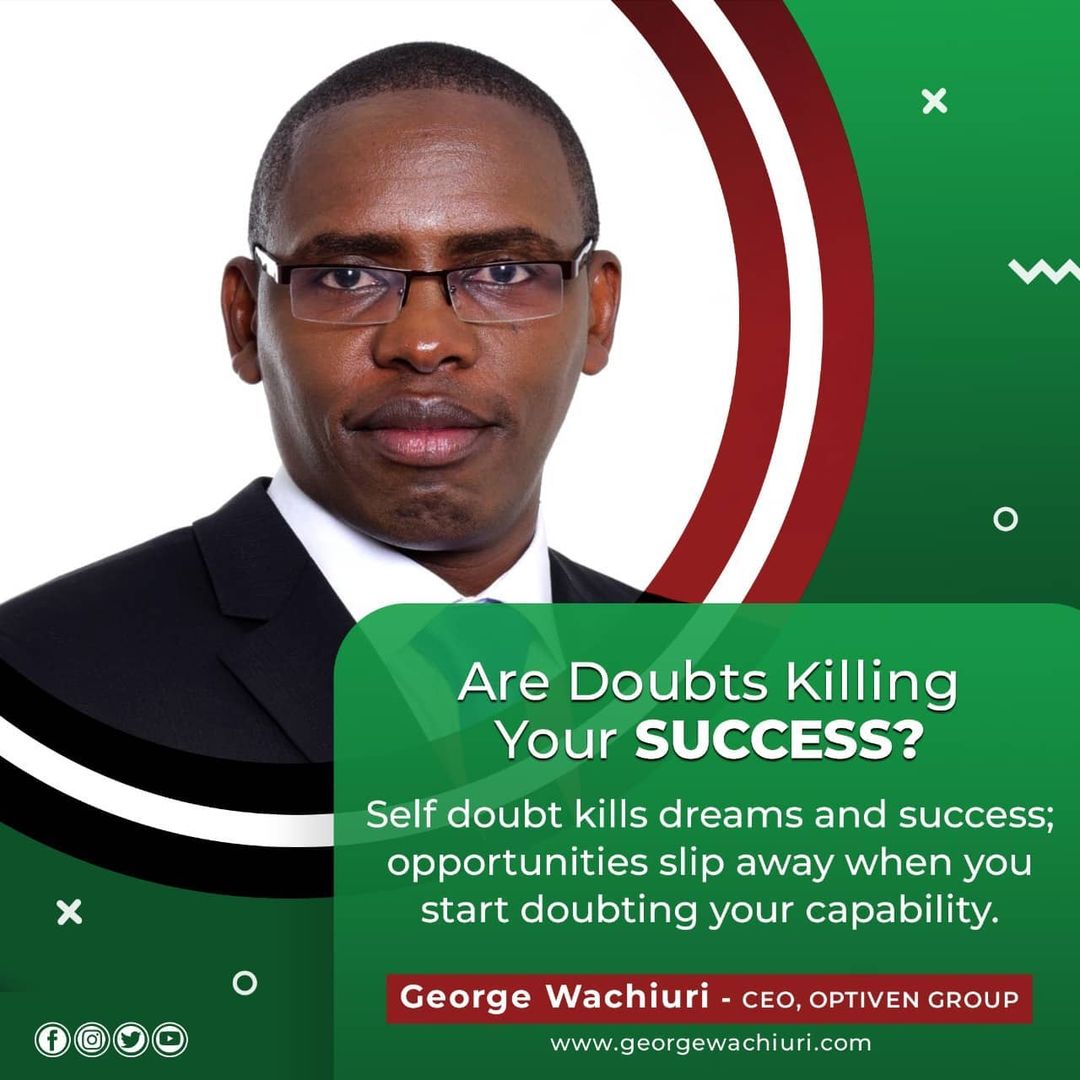 It was after he completed his high school education that Wachiuri’s entrepreneurial journey began. Instead of sitting idly at home waiting to join the university, Wachiuri decided to spend the two years offering landscaping services and selling onions.

Finally, he joined the university and his main goal at the time was to learn. Little did he know that his entrepreneurial spirit would rise once again. This time around, he started a magazine library. He discovered students enjoyed reading magazines. So, he made a collection of old magazines that he would lend for one bob each. He also offered dry cleaning services to his fellow students.

As if that was not enough, Wachiuri acquired a Yashica camera and used it to take photos of fellow students. This also earned him an extra income. Before long, the University of Nairobi (UoN) management, where he was studying at the moment, noticed his efforts and awarded him the 1997 Entrepreneur of the Year.

A Stab in the Corporate World

Although Wachiuri had several job opportunities in the corporate world, he did not stay for long. Perhaps this was because he was meant to be an employer and not an employee. At one point, he got a procurement and logistics supervisor’s job after developing a system that would track money usage. He also got an accounting job that did not last for long.

After trying several jobs, Wachiuri decided to start doing his own business. Together with his brother, they started Beauty Pool Investments which made and sold shampoos. Later on, he also decided to test the real estate business which was doing well at the moment. As fate would have it, none of the businesses picked well and he went back to formal employment as a part-time lecturer at Daystar University.

In total, Wachiuri had started fifteen businesses that were doing well but ended up closing due to one reason or another. However, there was one incident that got engraved in his mind which he will remember for a long time. One day, a man who knew his interest in properties offered a piece of land for sale. Wachiuri bought it with the intention of developing and reselling.

After he had sold some of the property, he learned that the land belonged to the government. He had been conned in broad daylight. He could not trace the man who sold it to him and at the same time, he had to repay the customers who had already bought some property from him. In total, he lost Kshs5 million equivalent to $44,021. This was his lowest point in life. He revealed,

“These were the only two beings [God and my wife] that kept me moving. Were it not for them, I could have probably sunk into an awful depression.”

The Birth of Optiven Limited

Fast-forward to a year later, he got an offer from a landowner who was selling his land for quick money. Although he did not have money to buy it, he brainstormed and managed to deposit half a million shillings equivalent to $4,402 in the man’s bank account. This marked the birth of Optiven Limited as we know it today.

Over the years, Optiven Limited has become one of the most sought-after property and real estate companies in Kenya. It has won numerous awards in Kenya and beyond. Wachiuri attributes its success to his desire to sell authentic and genuine property. He had this to say,

“I lost over Sh5 million on a bad deal which was all my 10-year savings in employment. That loss drives my passion. No single Kenyan will ever lose money if they deal with us.”

Wachiuri’s desire for education is evident since his early years. He holds a Bachelor of Commerce degree and a Masters in Business Administration from UoN. Furthermore, he is also a Certified Public Accountant – CPA (K).

Recently, he became a Doctor of Philosophy after acquiring a Ph.D. in supply and chain management from Jomo Kenyatta University of Technology (JKUAT). This, he believes, will help him steer Optiven Limited to greater heights. Although he had to work very hard to pay for his school fees, he can now enjoy the fruits of his labor. 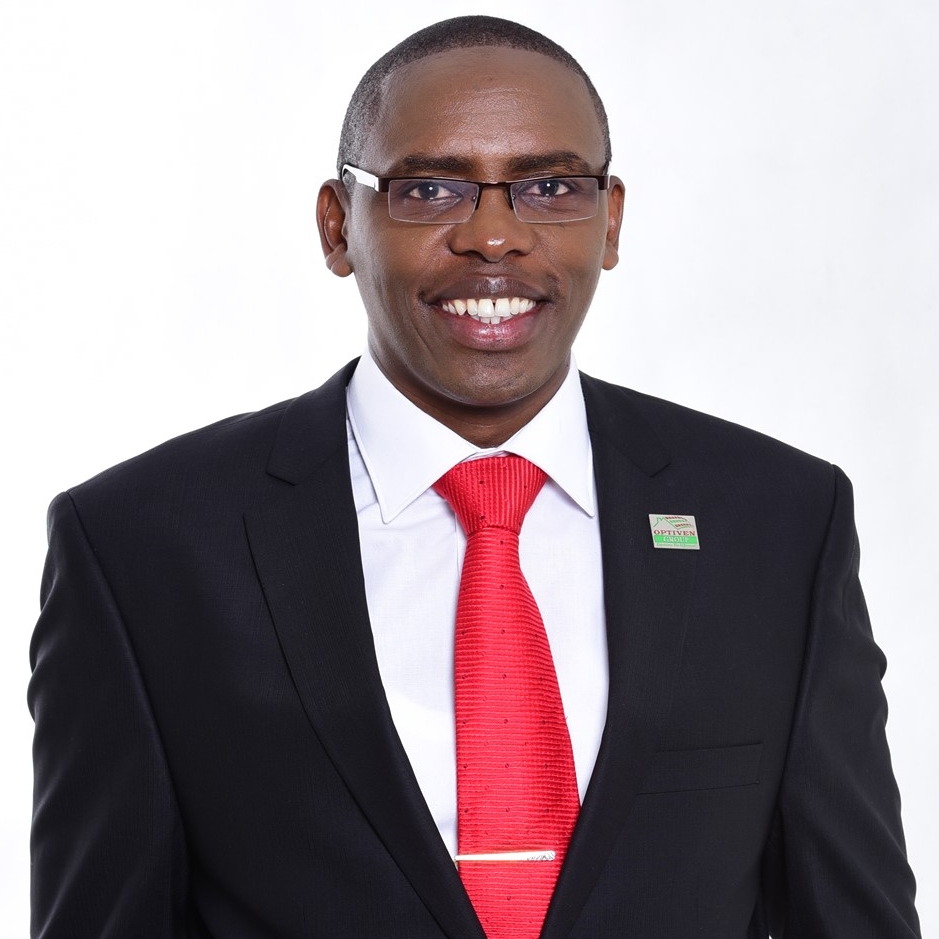 Despite making huge and painful losses, Wachiuri kept trying again and again until he made it. Those who make it in any field or in life never get tired of trying until they achieve their goals. He said,

“After the loss, I swore that I would never do business again, but I remembered that winners never quit and quitters never win.”

#2. Failures act as lessons to do better

“My previous businesses failed but they acted as a lesson to do better, my appetite for taking risks grew as a result of many failed ventures that I started.”

#3. Focus on your vision

Despite many challenges that kept cropping up in his life, Wachiuri was focused on his goals and visions. Losing focus will only keep running in circles in your current situation. In his words,

“I learned from the initiatives that no one should ever give up. I learned to focus on my vision, trust in God, be self-disciplined, network relentlessly, be passionate about my undertakings, work smart and hire people who are smarter than me.”

ALSO READ: Entrepreneur Spotlight: Lekau Sehoana Went From Having No Shoes To Building A Multimillion-Rand Sneaker Brand In South Africa

To grow your business from one level to another, deal with your customers with honesty and professionalism. Also, ensure that you become innovative and creative when offering solutions to your clients. Wachiuri had this to say regarding Optiven Limited,

“At Optiven we do not promise what we cannot deliver. The secret of our growth is keeping our word and integrity. We aspire to keep our focus on making our customers wealthy.”

#5. Start where you are with what you have

Don’t wait for a perfect time to actualize your idea. Start right where you are with whatever resources you have. With time, everything will align itself. Wachiuri started his multi-billion real estate company with $704 cash money and a $2,641 loan from a bank. Today he attests that,

“Despite the dramatic start which forced us to rely on debt financing, the company has grown and employs more than 50 today. Our projects have gradually raised the company’s asset value to more than Sh1 billion.”

Wachiuri believes that every experience we go through in life helps in shaping us for the better. The most important thing is to make sure that we take the valuable lessons and carry on. He says,

“I always believe that we are shaped by the experiences that we go through in life. It is therefore prudent to make sure that whatever you go through, you learn the lessons so that you do not go back there.”