Zimbabwean Woman Gets Life-Size Statue In New York. Here Is Why 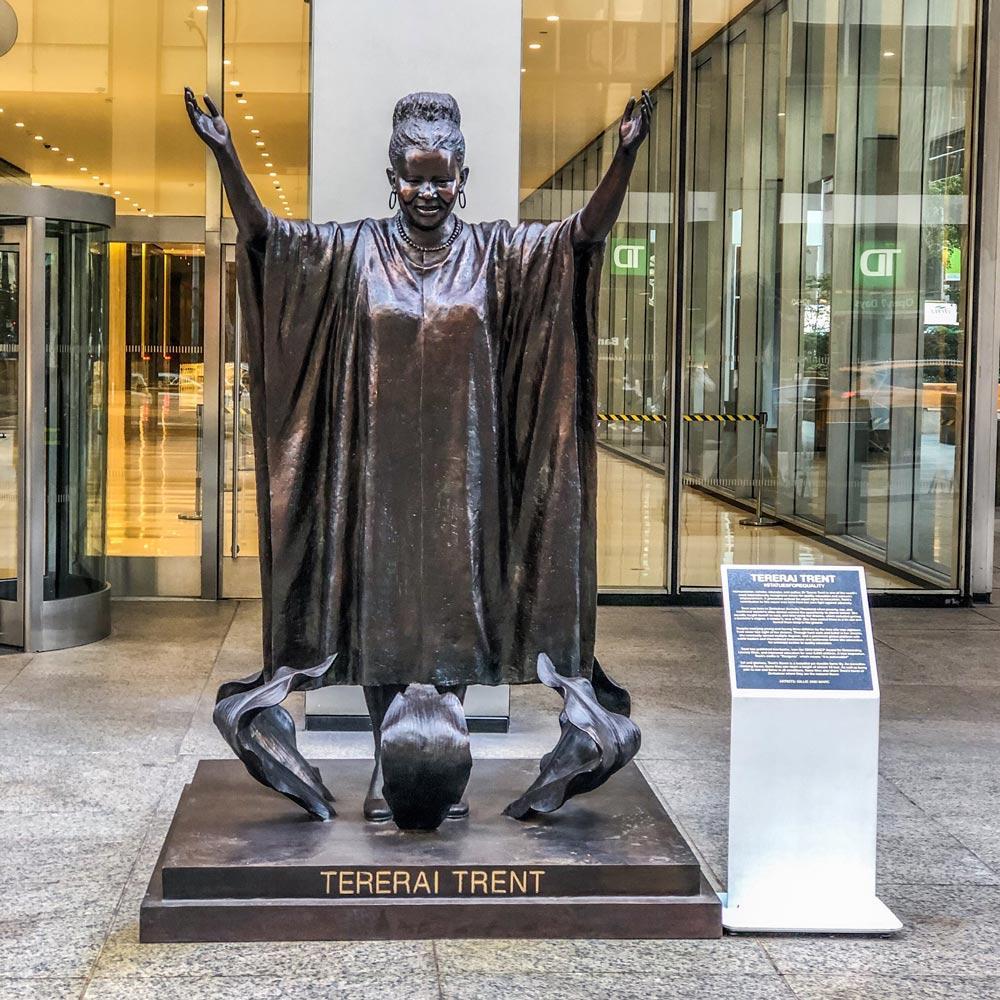 Tererai Trent statue for in New York is the first of it’s kind for an African woman. Photo credit Twitter

Self-determination comes in various shades. For Zimbabwe’s Dr. Tererai Trent, it was the determination to read. In 2009 when she appeared on “The Oprah Winfrey Show”, she told the remarkable story of how she taught herself to read using her brother’s schoolbooks. Subsequently, she had to surmount enormous odds to pursue her academic dreams. Tererai Trent was one of the ten women chosen for the ‘Statues For Equality’ project. Speaking at the unveiling ceremony, Trent said,

“I come from a very poor place, and I grew up very poor. I had four babies before I was even 18 years of age, and to think that because of the power of believing in a dream and today I am being celebrated. And to think I have a statue in New York, the most celebrated city in the world? It’s just unbelievable. Even my own grandmother and my mother never dreamt of that.” 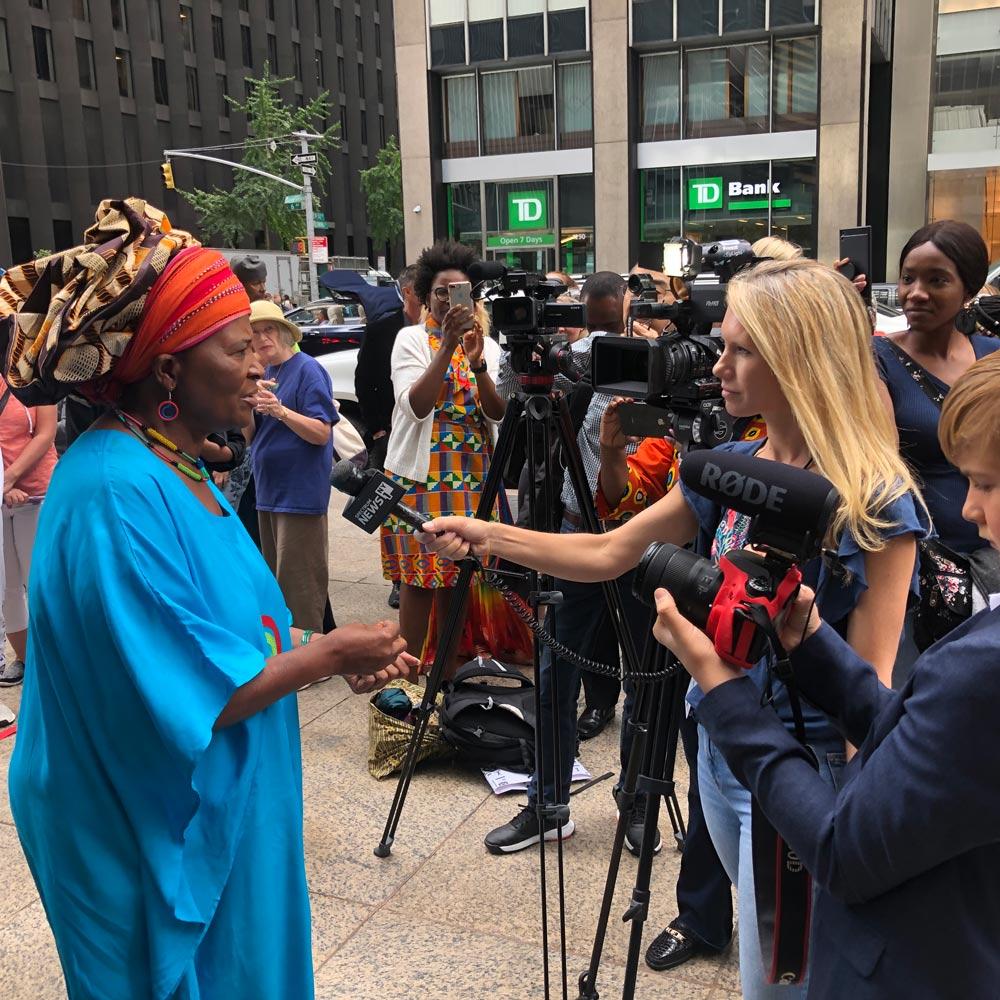 As a child in her home country, Trent was denied education because she was a girl. At the age of eleven, she was married off. However, she did not let the prevailing circumstance define her. Rather, she continued to keep her academic dream alive. She secretly taught herself how to read and wrote her dreams and buried it in the ground. Her dreams included getting a bachelor’s and a master’s degree as well as a Ph.D. Trent said she wants to end the cycle of poverty.

Through hard work and believe, Trent accomplished her dreams of earning multiple degrees. Consequently, she earned a Ph.D. in the U.S. She taught at Drexel University, Pennsylvania. However, she also holds the reputation of being Oprah Winfrey’s ‘All-time favorite guest’. Trent has published two books and found Tererai Trent International, a foundation that provides quality education to rural communities in Zimbabwe. Also, in 2018 she won the NAACP Award for Outstanding Literary Work. However, her story is to date, a source of motivation for millions of people.

We have a moral obligation, those of us able to achieve our dreams, to help others stand on our shoulders and provide that opportunity. - @TereraiTrent Click To Tweet

Trent now gives back to women and girls in communities like hers. With the help of Oprah Winfrey’s $1.5 million donation, Trent has been able to build 12 schools in rural Zimbabwe. Consequently, she has helped over 38,000 children to get an education.

In an interview, she said:

“When one woman is silenced, there is a part within all of us women that get silenced. But when women are awakened and recognized in public places, all of us, we get the true joy of knowing that we are all equal with men. We have a moral obligation, those of us able to achieve our dreams, to help others stand on our shoulders and provide that opportunity.”

ALSO READ: Here Is What Zimbabwean Actress Vimbai Mutinhiri Said About Business And The Fabulous Lifestyle

To honor her friend of 35 years, Beatrice Nyamweda traveled from Zimbabwe to attend the unveiling ceremony. According to Nyamweda, Dr. Trent’s impact is felt in communities with opportunity gaps. She said,

“There are 10 children who went to her school and started studying at the university currently. She has changed the lives of these children who are bright but lack resources. I am proud of her for that.”

The Statues For Equality project

The Statues For Equality project is an initiative by the couple Gillie and Marc Schattner. According to the couple, the initiative is an attempt to strike a balance in gender representation in public art. Statistics show that there are less than 3 percent of female statues in New York City. However, the couple says the initiative has spread to the UK and Australia. Speaking on the future of the initiative Gillie said,

“We hope that as the project expands, it will include a broader diversity of race, class, ability, sexual orientation, and gender expression.”

Joining Tererai Trent’s statue at the 1285 Avenue of the Americas in New York City are bronze statues of popular female icons including Oprah Winfrey, P!nk, Nicole Kidman, Jane Goodall, Cate Blanchett, Janet Mock, Tracy Dyson, Cheryl Strayed and Gabby Douglas. The couple is calling on the public to nominate the next woman that deserves recognition. You can support the couple in their mission of raising awareness for gender representation in public art by using the hash-tag #StatuesforEquality.

Who do you think should be the next woman to be honored?