On June 1st, Nigerians woke up to what was a perceived threat from their government on Twitter. The tweet quickly circulated on social media causing an emotional response from Nigerians. In his tweet, the president promised to treat those who were misbehaving “in the language that they understand”. He further made reference to the Nigerian civil war that took place in 1970 and lasted for 30 months.

The president’s tweet was clearly directed to the pro-Biafra activist, accused by the government of vandalizing public properties. A few hours later on June 2nd, Twitter deleted the tweet for violating its policy. Although Twitter’s reaction was applauded by many Nigerians, their actions were not without reprisals.

On Friday, June 4th, the Nigerian Minister of Information and Culture, Lai Mohammed announced the indefinite suspension of Twitter in the country. This makes Nigeria one of five countries in the world to do so. Ironically, the information minister made the announcement on Twitter.

Lai Mohammed also said that Twitter is “bias” towards the Nigerian government. According to him, Twitter was encouraging activities that could undermine the existence of the Nation. This statement is believed to be in reference to the #ENDSARS protest that took place in Nigeria in October 2020. Social media platforms (mainly Twitter) served as a convergence point for the youths. The platform was handy in organizing and sharing information about the protest. 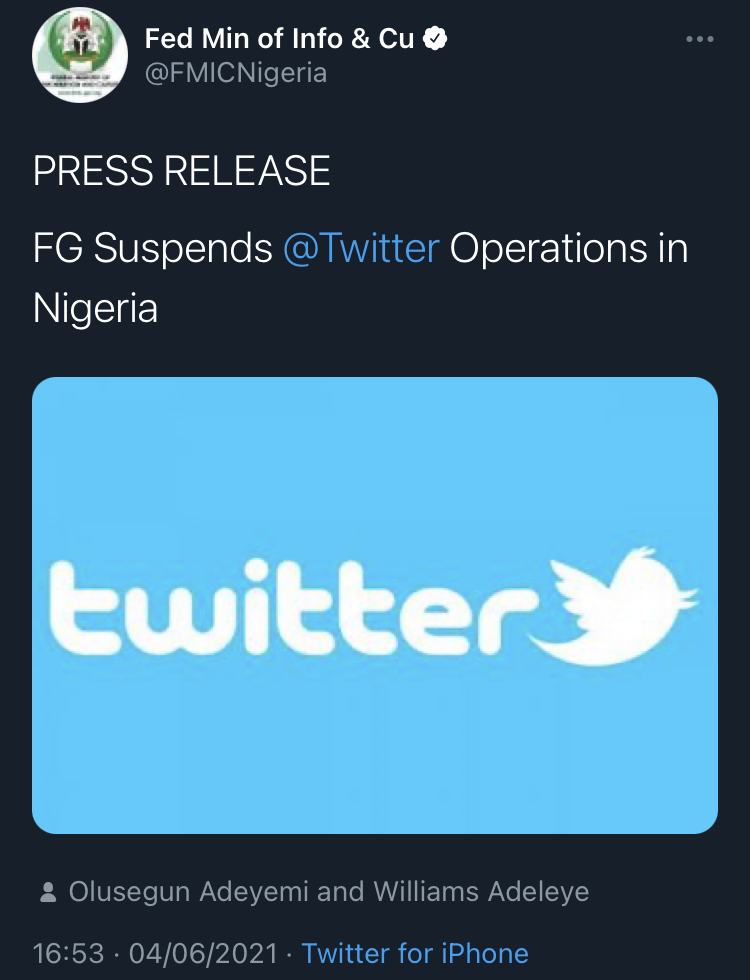 Barely a week after the #TwitterBanInNigeria, the Federal Government made its debut on Koo, an Indian-based social media platform largely unknown to many Nigerians.

We put together all you need to know about the app. Click the link to read. #DubawaCheckshttps://t.co/3phMXiwvAk

During a weekly briefing with journalists in Abuja, the information minister claimed that Twitter was aiding the IPOB leader Nnamdi Kanu. He said the platform was used to order the killing of security personnel in the country. The minister also revealed that the Federal government requires all Over-the-top (OTT) media and social media operations in Nigeria to be licensed. Consequently, the government is planning to arrest anyone who disobeys the Twitter ban.

Nigerians are expressing their fears with many saying the government is becoming more repressive. In a statement, Twitter said,

“ deeply concerned by the blocking of Twitter in Nigeria. Access to the free and #OpenInternet is an essential human right in modern society. We will work to restore access for all those in Nigeria who rely on Twitter to communicate and connect with the world. #KeepitOn.”

The top 10 trending Twitter trends in the US are all of Nigerian origin. By banning Twitter, General Buhari just made our cause global. And now the whole world is watching how the dictator with a fragile ego is dealing with #June12thProtest. #TwitterbaninNigeria really backfired! pic.twitter.com/n5PbpFwfxA

We are sleeping on our rights & giving the govt too much leverage to sleep on our rights by keeping quiet over #TwitterbaninNigeria today, they are talking about regulating our rights of expression on social media! We must act now to get our rights restored. #lifttwitterbannow

Nigeria government is fighting the youth see how active they have been in #NBCbill and #TwitterbaninNigeria but turn blind eyes on insecurity and poverty. We are under tyranny. If we kikiki it today tomorrow won't even be able to ki unless the govt say so. We need to come out

ALSO READ: Chadians Are Back On Social Media And WhatsApp

However, former US President Donald Trump praised the Nigerian government. In a statement that circulated the internet on 8th July, the former US president called on more countries to ban both Twitter and Facebook, saying  “Perhaps, I should have done it while I was president”.

Who Is Suffering More From Twitter Ban; The Leader Or Lead?

Is it that no one in this government has come to weigh the pros and cons of #TwitterbaninNigeria ? How does it reduces the level of unemployment in the country?

Poll by NOI Polls, an independent research organization shows that about 61% or 120 million Nigerians have access to the Internet. Out of this figure, 20% or 39.6 million Nigerians own a Twitter account. Furthermore, 20% use the platform to advertise their businesses while 18% use it in search of job opportunities. Therefore, with Twitter ban in place, businesses that advertise with the platform will have to look for alternatives. Until then, they are most likely going to lose sales. Global internet monitor NetBlocks reports that Nigeria losses about 2 billion Naira ($6 million) daily.

ALSO READ: Meet The Africans On Facebook Oversight Board That Decided Trump’s Fate On The Platform

Looking at the statistics, it is obvious that both the government and the people of Nigeria are suffering the Twitter ban—albeit not equally. However, the government stands to lose the most because, over the years, it has become dependent on digital media for campaigns and publicizing government projects. These platforms serve as a cost-effective and faster means of communication.

A typical example is during the pandemic when the government relied on Twitter, Facebook, and other social platforms in the country to disseminate information. Also, the fact that the government used Twitter to announce that it was banning Twitter is not only laughable but shows that the Nigerian government needs their services.

Many Nigerians now use a Virtual Private Network (VPN) to circumvent the ban on Twitter. However, this comes with its own sets of challenges. Firstly, VPN connections are often slow and present security risks that could result in data leaks.

Although it is unlikely the ban will be lifted anytime soon, Twitter announced via its public handle that they are ready to talk with the government. Also, the US State Department and 70 human rights and Civil rights groups are pushing hard against the Nigerian government. We are watching to see if the Nigerian government will give in to the demands of its citizen and the international community or stand on its decision to regulate social media and stifle free speech in the process.