3 Best Places To Buy Land For Investing In Nigeria

African countries that rely solely on crude may need to rethink their future. This is because some of their neighbors are making sweeping reforms that may shrink crude trade in the coming years. One of such countries is Uganda. Kiira Motors Corporation (KMC) which is owned by the State of Uganda has unveiled its first set of Kayoola Solar Buses. According to a statement from the company’s website,

“The Kayoola Solar Bus concept represents the next generation of public transport for cities within the region. The first of its kind on the African continent. This technology serves to conserve the environment and public health.”

This is actually the third automobile prototype by the Ugandan startup. The others are the Kiira EV (Africa’s first electric vehicle) and Kiira EV SMACK (first electric hybrid vehicle designed and built in Africa). Kayoola EVS has a steel superstructure. However, the floor of the interior is made of bamboo. The interior furnishings are mainly plastics and aluminum. These are mostly materials that are locally available. According to the company,

“These provide an unprecedented opportunity for participation of a wide range of local manufacturers making components to feed the production line at the Kiira Vehicle Plant. This addresses the key aspects of supply chain localization and engendering import substitution.”

Kiira Motors Corporation is an idea that began at the Makerere University College of Engineering, Design, Art, and Technology (CEDAT). However, the bus was manufactured in conjunction with CHTC Motors of China. Speaking about the solar bus initiative, the Executive Chairman KMC, Prof. Sandy Tickodri-Togboa said,

“Early this year (2019) was when we agreed to send a team of six staff of the Kiira Motors Corporation comprising of four engineers and two technicians to be actually trained in the plants of CHTC in China. Within about three months, the first bus was already out. However, it was important for us at that stage to go and check to see if the transfers are the appropriate ones.”

The partnership between Kiira Motors Corporation and CHTC was part of a government proposal for capacity building. Components of the agreement include technology transfers, capacity development for Ugandan engineers, and attainment of experience to build buses locally. Consequently, CHTC will supply parts that are not readily available in Uganda. According to the Chief Executive Officer of KMC, Paul Isaac Musasizi,

“We expect the charger for this bus to be able to top it up to 80% full charge. So when we are to charge we can charge it to a capacity of 240 km within an hour. Transporters will need about 50,000 shillings to charge a battery to drive to Mbale or Mbarara from Kampala rather than spending about 100,000 on fuel for the same destinations.” 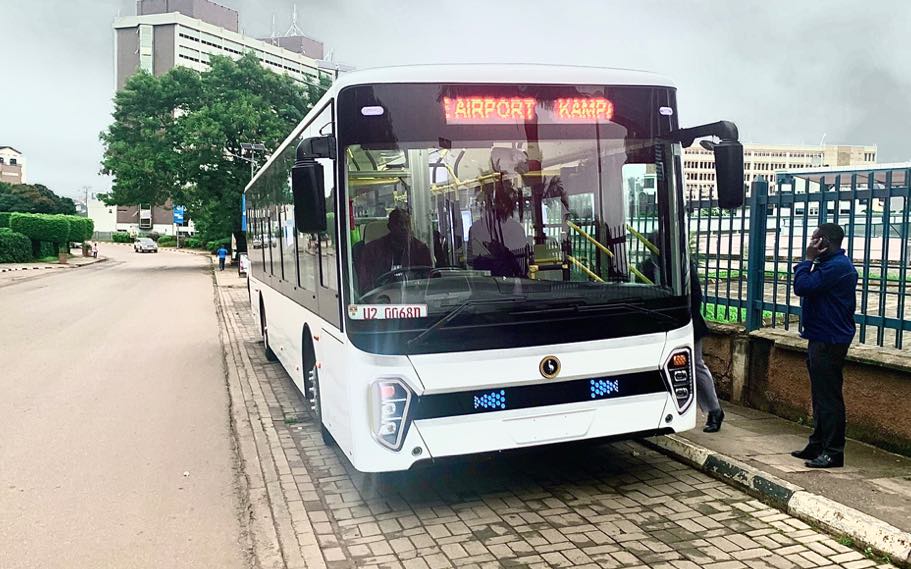 Kiira Motors Corporation’s Kayoola buses can run 300 km on a full charge. It has a battery capacity of 560 kWh. The 12-meter city bus has a capacity of 90 passengers (49 seated and 41 standing). Reports by softpower.ug says Kayoola EVS has USB charging ports and on-board Wi-Fi. The operating cost per kilometer of the electric buses is put at Shs 320. This is highly efficient when compared to Shs 1,670 per kilometer of diesel buses. According to the company’s website,

“The telltale signature of traditional diesel engine buses—plumes of dark smoke and grumbling engine sound—are replaced by a soft whine. The Kayoola Solar Bus will be easier to maintain, in terms of not having to change oil and not having to repair hydraulic lines that run through a conventional bus. It offers a smoother and cleaner ride. The city will love it.”