Afronista of the Week Celebrities Fashion

Afronista Of The Week: Examining The Humanitarian Works Of Tiwa Savage

Our Afronista of the week has earned her reputation as the ‘‘Queen of Afrobeat’’.  Tiwa Savage is a multi-award-winning singer and songwriter. Also, her career is marked by incredible milestones. For example, she worked as a backup singer for stars like George Michael, Whitney Houston, and Mary J. Blige.

Above all, she celebrates African clothing on her platforms. In other words, Savage is a leading supporter of Nigerian brands. Also, she does not flinch when it comes to taking a bold stand against social ills. This is a story about Tiwa Savage’s remarkable journey and a refreshing look at her fashion choices.

ALSO READ: Afronista Of The Week: The Colorful Life Of Sho Madjozi

In 2020, disturbing reports appeared in the Nigerian media. Incidents of killings, rape, and sexual abuse cases were on the increase. Interestingly, due to lockdown restrictions, people had time to listen to the news.  This led to increased awareness about the current events. As a result, in June 2020, Tiwa Savage began a #WeAreTired hashtag using the tweet,

It wasn’t long before a vast majority of her 4.8 million followers on Twitter began to retweet. In a matter of hours, it became a top trend. Also, it gave victims of sexual violence a platform to speak out and share their experiences.

The Fight against Rape

Although there have been rising cases of rape and violence against women in Nigeria, the rape and murder of 22-year-old Vera Omozuwa was the straw that broke the camel’s back. Vera was a student at the University of Benin who went to read in a church. Whilst she was there, she was raped and savagely attacked with a fire extinguisher. Subsequently, she died of her injuries.

Tiwa Savage did not sit back and watch. A single tweet from her was enough to drive conversation and force authorities to fish out the perpetrators. She and other artists met with the police commissioner of Lagos State. During the meeting, they discussed how to assist the victims. They inquired on whether there were numbers the public could call to report incidents of sexual abuse.

In addition, she is providing legal aid to rape victims because many of them do not have the financial means to engage lawyers. Savage is also working to set up ‘We Are Tired’ as a charity that will lend support to rape victims and their families.

Savage is a dedicated supporter of breast cancer screening projects across Nigeria. Also, she has been fundraising for the construction of schools. In 2017, she joined Rotary’s campaign for polio eradication. Consequently, she helped raise awareness about the disease. Other famous celebrities who participated in Rotary’s public awareness campaign included Bill Gates and Archbishop Desmond Tutu.

Savage whose real name is Tiwatape Savage was born in Nigeria in 1980. When she was 11 years old, her family relocated to London. Interestingly, from the time she was young, she showed an interest in music. For instance, whilst in high school, she played the trombone in the school’s orchestra.

At the tender age of 16, Savage started out in the music industry doing vocals for popular artists. However, her love for music did not deter her academic pursuit. Savage joined the University of Kent and obtained a degree in Business Administration.

Subsequently, her parents enrolled her at the Berklee College of Music. This was because they wanted her to have a good foundation for her music career. In 2006, whilst still in college, she participated in the UK edition of ‘The X Factor”. Sadly, she did not make it to the final 12. Eventually, she graduated with a degree in professional music.

The Start of an Illustrious Career

In 2009, Savage signed a songwriting deal with Sony/ATV Music Publishing. Consequently, she received credits for the song ‘Catch Me’ by the American singer Monica. In 2010 she moved to Nigeria and began her solo career with the release of the single “Kele Kele Love’. It was a great hit and her first album ‘Once Upon a Time’ followed in 2013. This marked the beginning of an illustrious career.

Is Wizkid married to Tiwa Savage?

When Savage’s marriage to Tunji Balogun ended, she began a relationship with Wizkid. However, it only lasted a year. The gossip about their relationship heightened with the release of Fever. Many said it was strange for a superstar like Tiwa Savage to feature in as a video vixen on Wizkid’s track.

What is Tiwa Savage’s net worth?

Tiwa Savage’s net worth is estimated to be $5million.

Did Tiwa Savage backup for Beyoncé?

Beyoncé was one of the musicians Savage worked for after she graduated from music school and began her career.

ALSO READ: Afronista Of The Week: A Peek Into Dorra Zarrouk Glamorous Wedding

Savage has a bold distinctive style in combination with a perfect ebony body. Interestingly, she loved to rock hugging outfits that highlight her curves. There are so many instances where she flaunts African prints. However, we present some of her most remarkable appearances below. 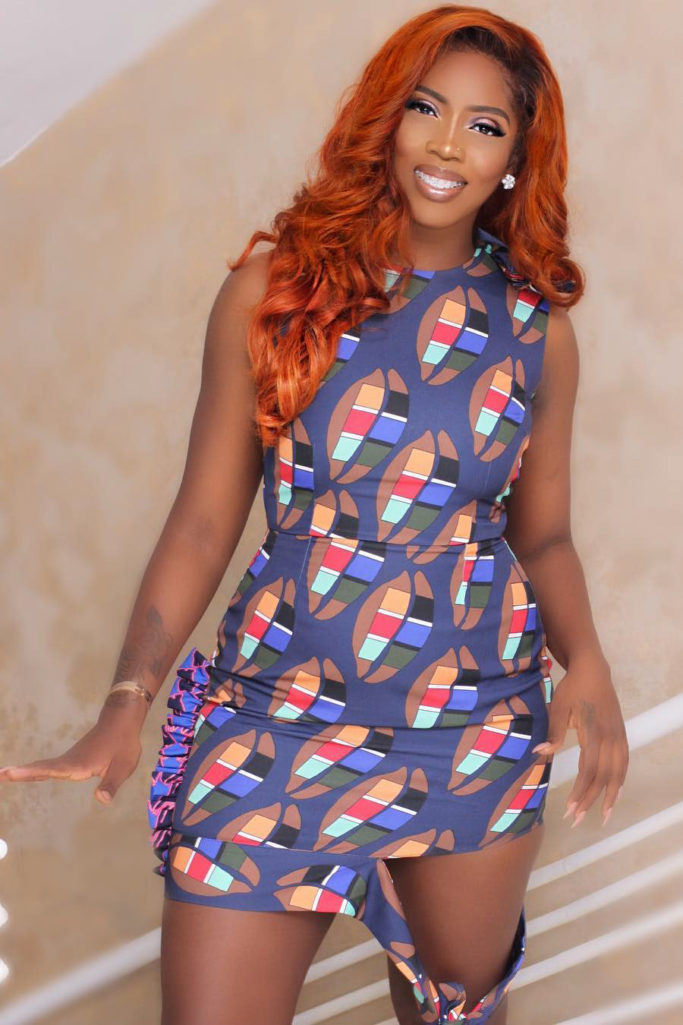 Savage is in a Lisa Folawiyo creation (Photo credit: onchek.com)

Savage is rocking a number from Lisa Folawiyo. The fabric is a custom print with a deep blue background. It is covered with African-themed motifs in the shape of a shield. The silhouette is contemporary with a form-fitting mini dress that has unique detailing at the hemline. 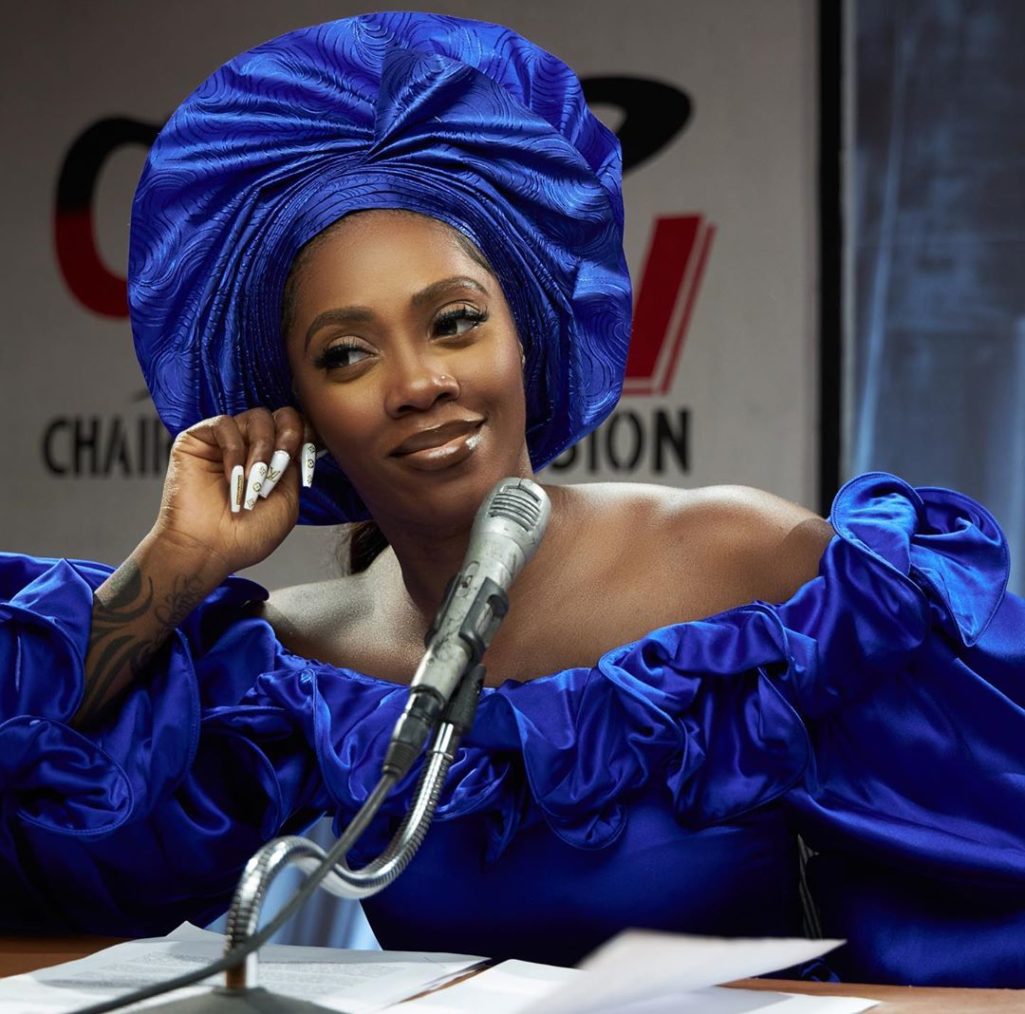 Blue is truly a royal color as Savage is looking regal in this traditional African gown and headgear. The off-the-shoulder creation has elaborate ruffles around the neckline and full bishop sleeves

Edgy and most stunning public appearances 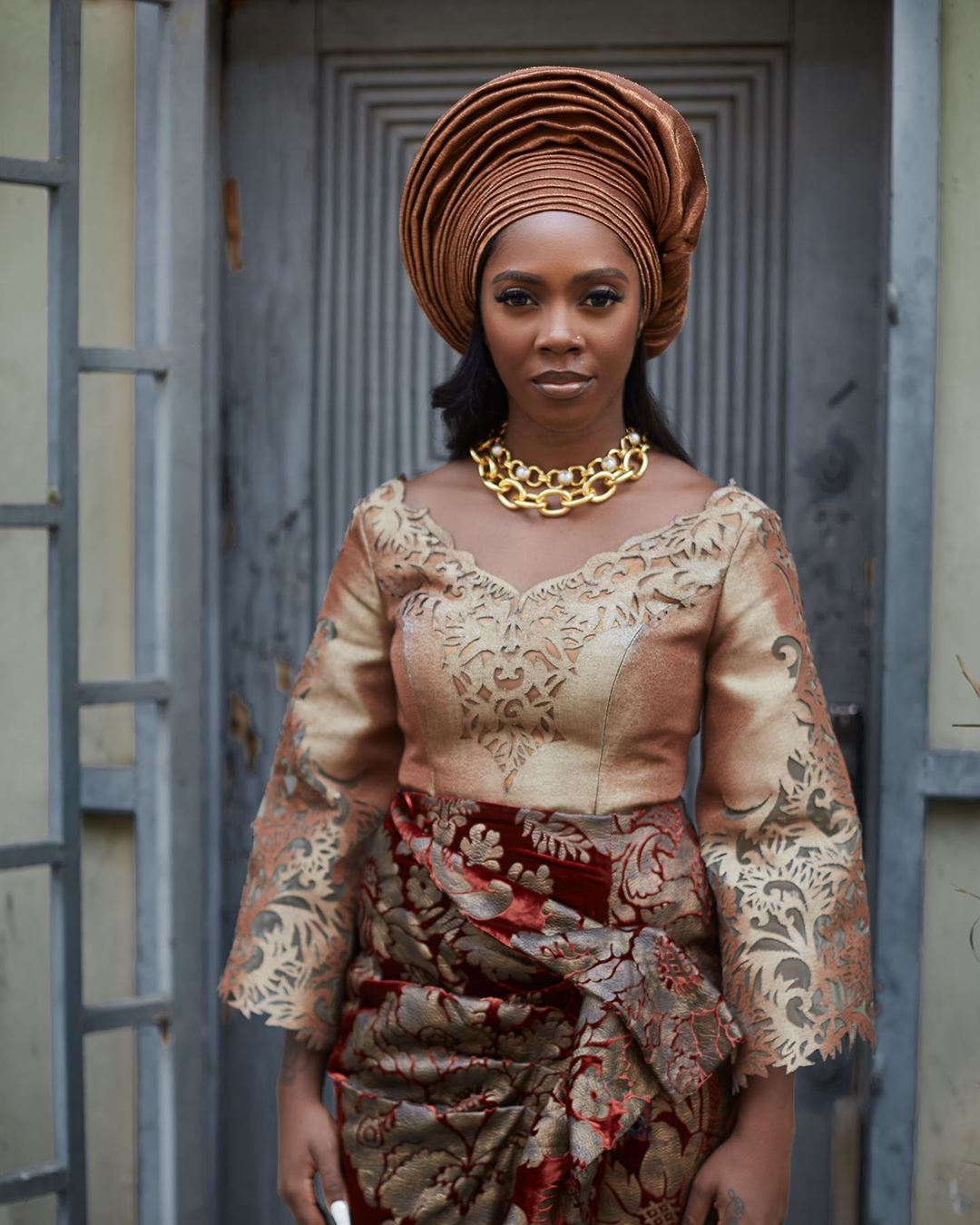 Rich shades of bronze and maroon blend well in this elegant African creation. The top is in blush brocade with a sweetheart neckline and intricate lace cutouts that mirror print on the wrap. The headwrap is in a brown shade that perfectly complements the outfit.

ALSO READ: Afronista Of The Week: Selly Galley And Her Struggle With Motherhood 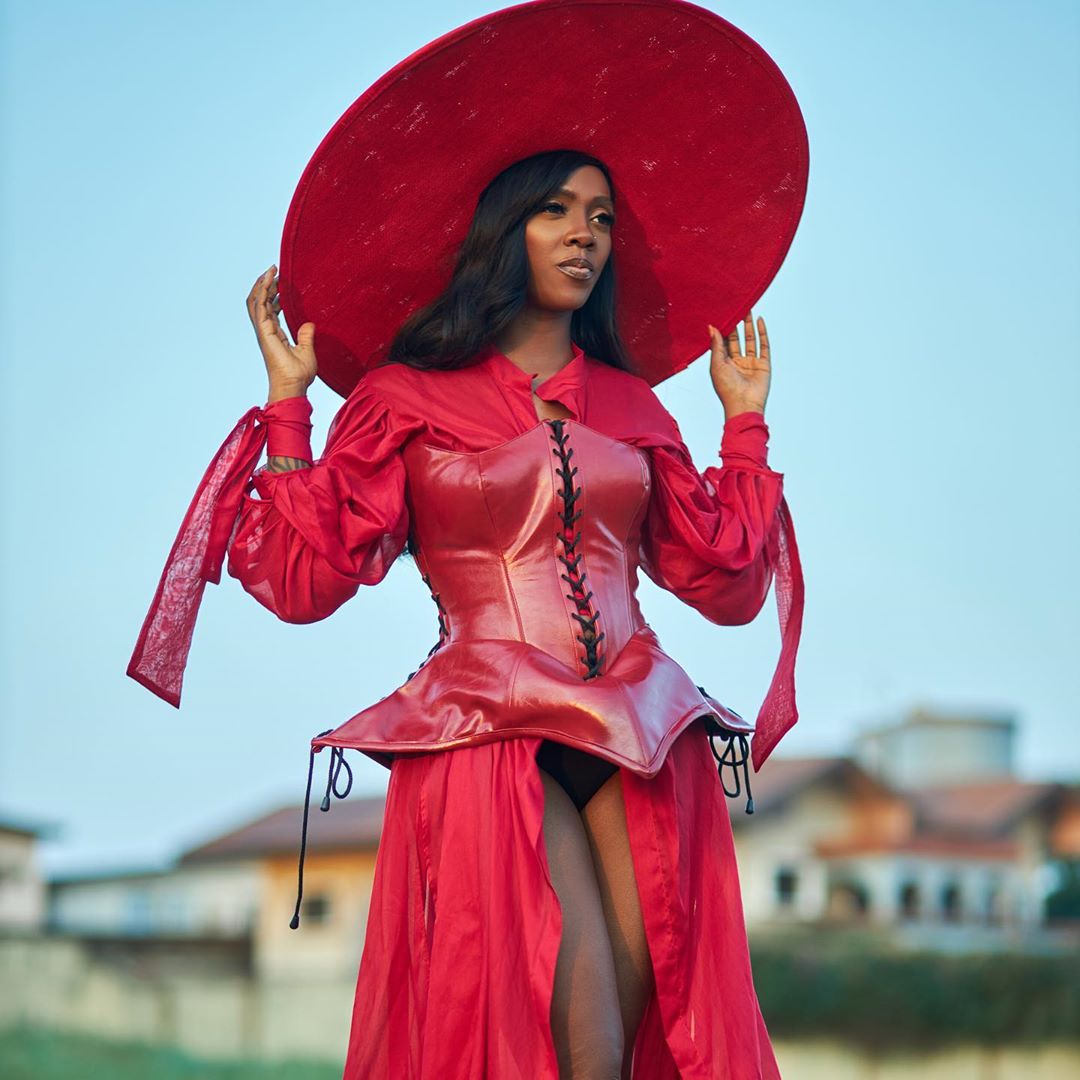 This creation by Tokyo James is not African. Nevertheless, it demonstrates the talent that exists on the continent. This bold number has a scarlet leather peplum bustier with black contrasting laces. The skirt has a daringly long slit and a matching sunhat adds a finishing touch to this boho-chic look. 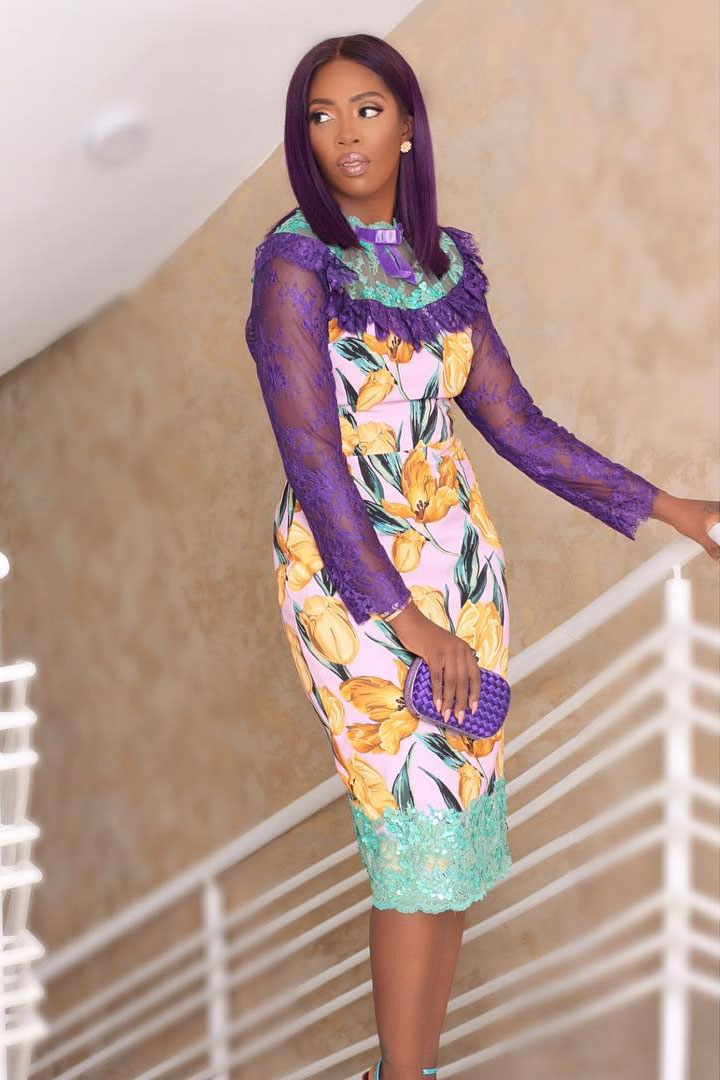 This vintage-look number is characteristic of Lanre da Silva’s designs. There is an enchanting mix of textures and colors, and the feminine bodice has a delicate lace edging. The colors blend well and the addition of the lilac clutch is a novel touch. 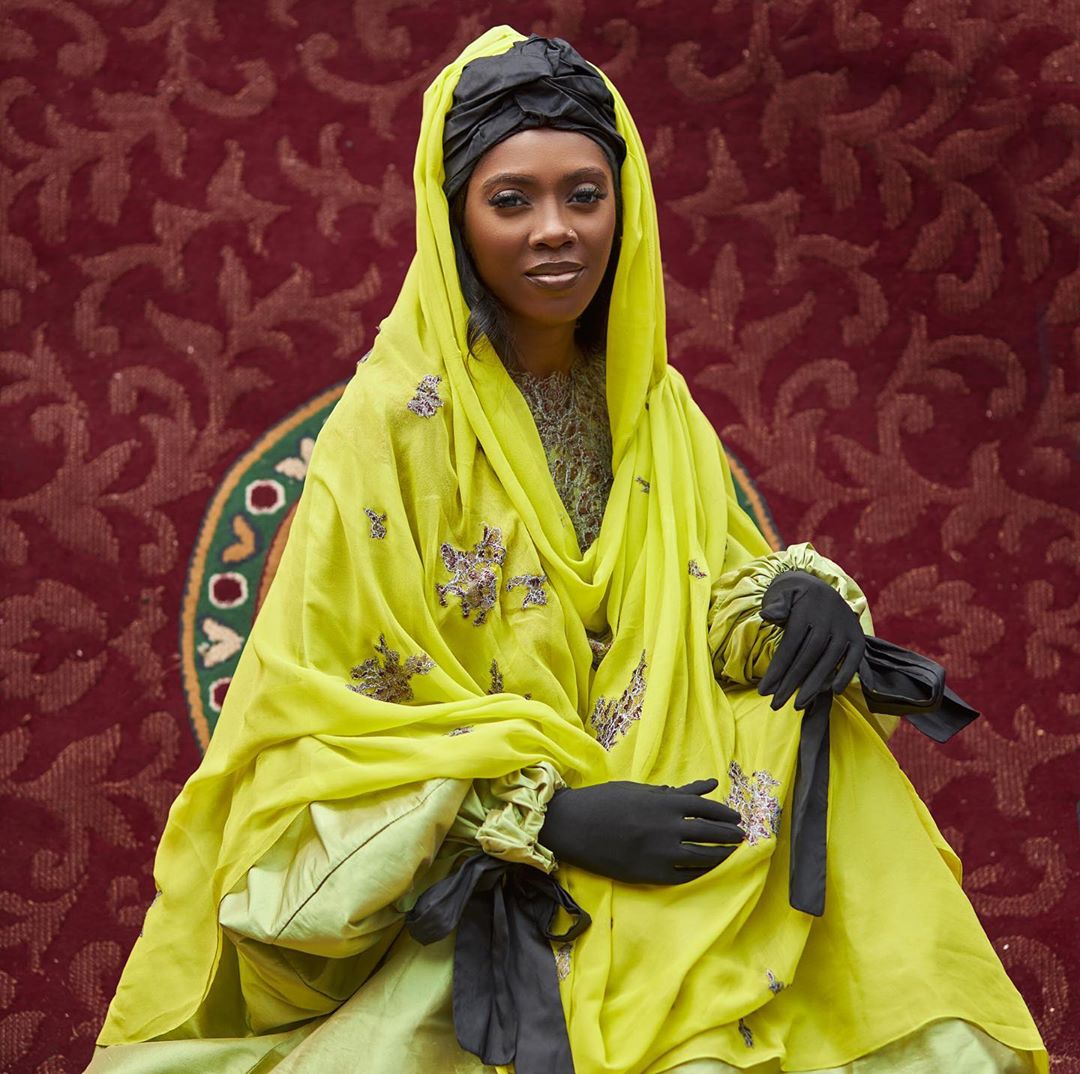 This stunning oriental-look ensemble consists of an inner raw silk gown and a yellow drape with rich embroidery. The bright-hued wrap flows from the head down. Also, it has touches of black in the headgear and gloves. Overall, it has a resemblance to North African dressing culture. 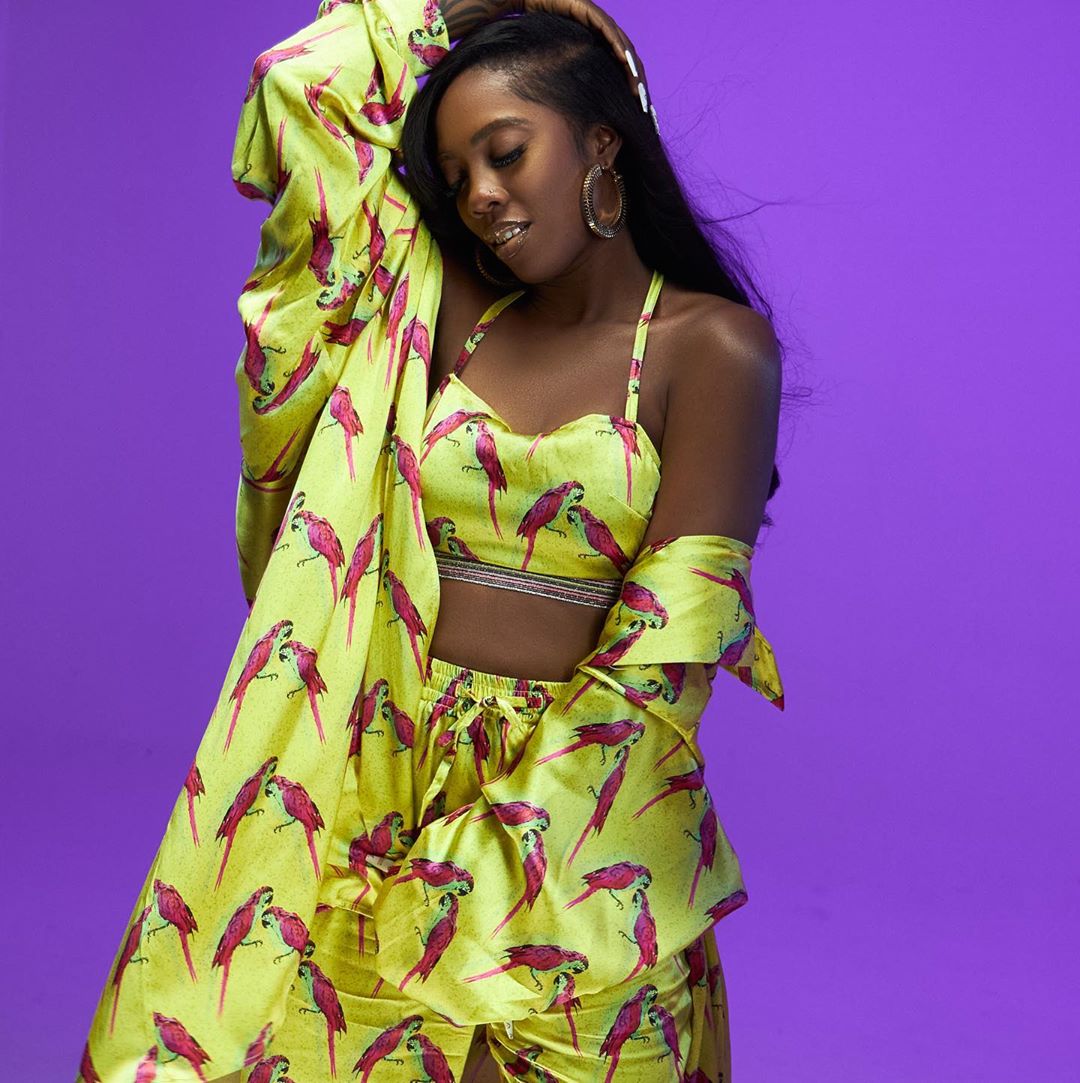 This cutting-edge 3-piece silk creation is fit for a star. Its fabric is sunny yellow with pink motifs. The ensemble consists of a halter neck top, a relaxed fit pair of trousers, and a loose-fitting jacket. It is perfect for a stage performance. 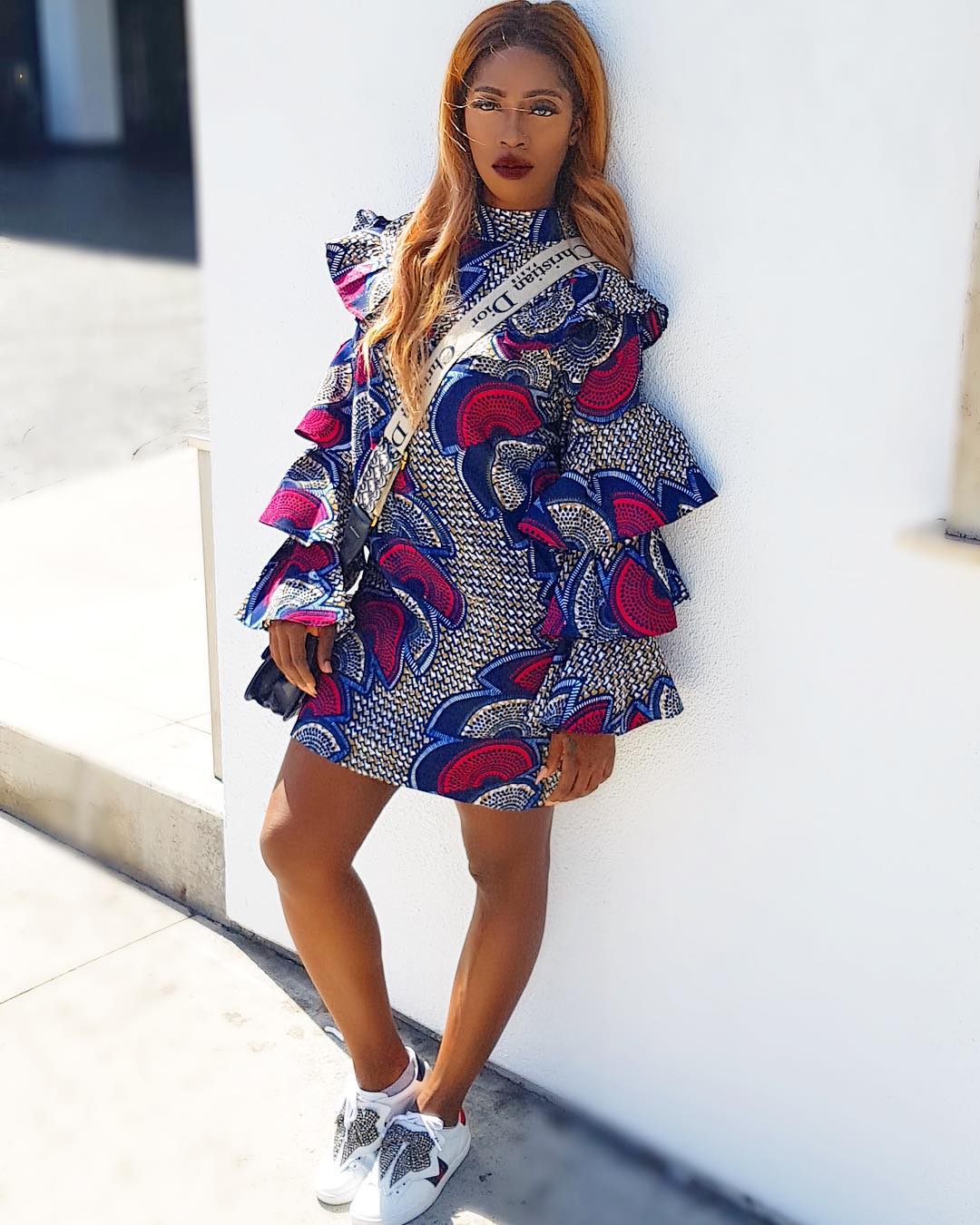 This is a chic way to dress down. Savage is in a bright Ankara mini dress with a high collar. The focal point of the outfit is the dramatic ruffle sleeve. A designer handbag and trainers round off the casual look with style. 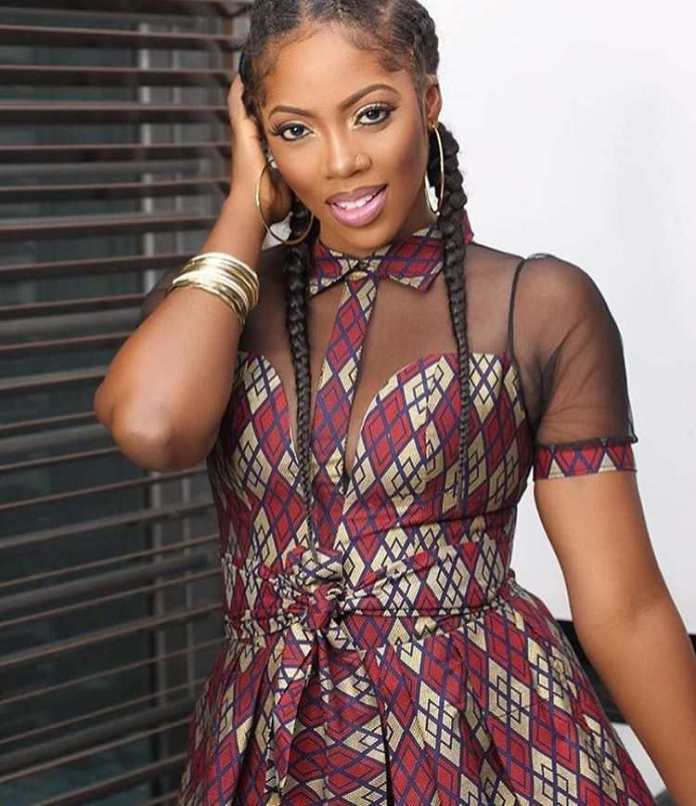 A demure look for Savage, this charming Ankara gown has an illusion neckline and tie simulation. It has an exquisite cut that fits snugly at the waist and flares out in pleats. The outfit is accessorized with simple gold hoop earrings and gold bangles.

Tiwa Savage has outstanding accomplishments as a musician and songwriter. Yet, she has done more than making a name for herself in the musical arena. Above all, she has demonstrated courage in the causes she supports. In an interview with Minou Itseli for Complex UK she said,

“I have a platform and that platform is so huge, I can’t just use it for music. I’ve got to use it for the voiceless as well.”