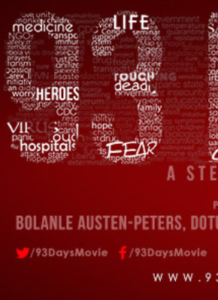 Nollywood’s docudrama “93 Days,” recently premiered in Lagos on the 13th of this month. It chronicles the harrowing weeks in the summer of 2014 when a man ill with the Ebola virus arrived in Lagos city from Liberia. The movie is co-produced and directed by Nollywood’s award winning director, Steve Gukas stars Hollywood’s Danny Glover. 93 […]