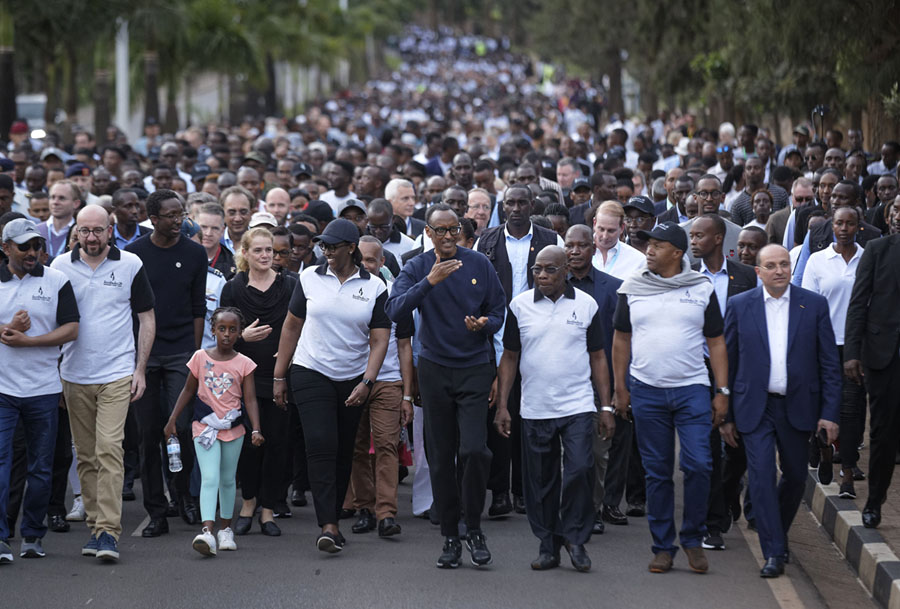 Rwanda’s President Paul Kagame, center, gestures as he and first lady Jeannette Kagame, center-left, lead a “Walk to Remember” accompanied by Ethiopia’s Prime Minister Abiy Ahmed, far left, Prime Minister of Belgium Charles Michel, second left, France’s Herve Berville, third left, and Governor General of Canada Julie Payette, fourth left, from the parliament building to Amahoro stadium in downtown Kigali, Rwanda Sunday, April 7, 2019. Rwanda is commemorating the 25th anniversary of when the country descended into an orgy of violence in which some 800,000 Tutsis and moderate Hutus were massacred by the majority Hutu population over a 100-day period in what was the worst genocide in recent history. Photo credit AP Photo/Ben Curtis

Rwanda made global headlines in 1994 following a genocide that led to the killing of nearly a million people. Tensions between minority Tutsi and majority Hutu led to mass killings. The main trigger of the genocide was the killing of the then Rwanda President Juvenal Habyarimana. On April 7, 2019, the country began a 100-day-long period of mourning.

On April 7 2019, Rwanda began a week of memorial events for the victims of the 1994 genocide. The three months of genocide led to killings of an estimated 800,000 people. President Kagame laid a wreath at the site of the memorial where 250,000 people are buried. At the site in Kigali, poems were recited and songs sung, marking the beginning of the week-long events of commemoration.

The President reiterated that history will never repeat itself. Kagame stated that the bodies and minds of Rwandese people bear the scars, but they are not alone. Although wounded and heartbroken, the Rwandan people are unvanquished. The Rwandan President also stated that Rwandans had granted themselves a new beginning.

Part of the memorial events included a “walk to remember”, starting from Rwanda’s parliament and ending at the national football stadium. Foreign officials and dignitaries joined Rwandans in the walk, culminating in a night vigil where candles were lit.

Every year, Rwanda remembers and mourns the atrocities that plunged the country a quarter of a century ago.  The country has set April 7 as a public holiday dedicated for this remembrance. The Memorial Day is the only public holiday in Rwanda that is not replaced on a working day—if April 7 falls on a weekend. The holiday is named Tutsi Genocide Memorial Day.

Most of the victims of the genocide were Tutsis, although there were a few Hutus. The Hutus who were killed were those that opposed the extremist position at the time. This memorial is not only observed in Rwanda but across the world, with the United Nations observing the memorial on a similar date—April 7.