Diaspora Spotlight: You Will Drop Your Excuses After Reading Kelvin Doe's Story 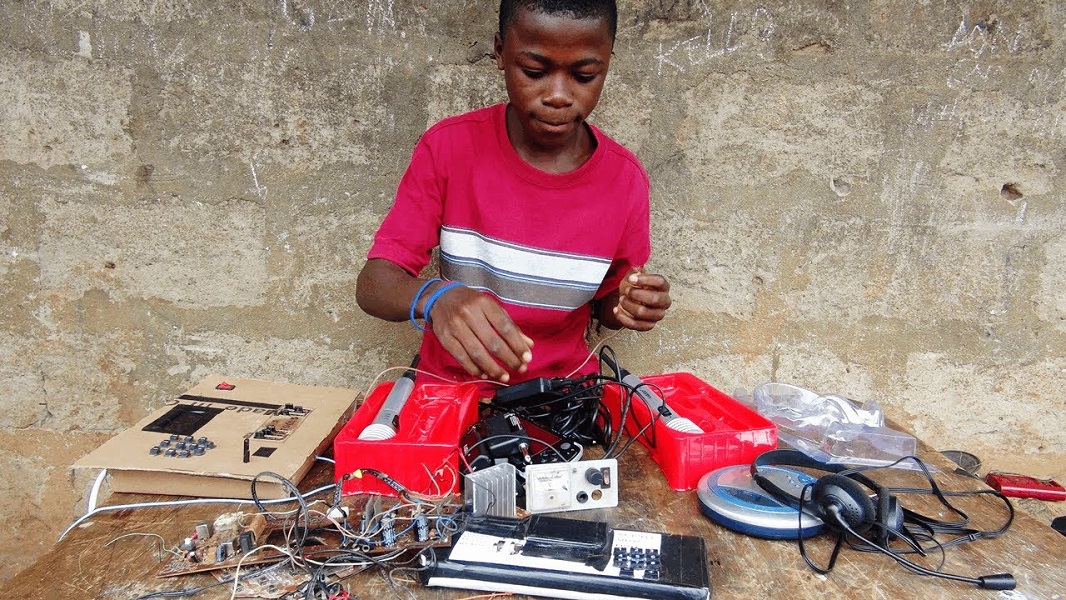 For many years, Sierra Leone and many African countries have received aid from the developed world. But it has not done much in solving most problems in the continent. In fact, some of the aids only end up impoverish the continent. Nonetheless, some creative and ambitious young Africans are now turning to innovation to offer solutions to problems facing their communities. One of them is Kelvin Doe.

Who is Kelvin Doe?

Kelvin is a talented Sierra Leonean who built an FM radio transmitter and other innovations from scrap parts. His homemade radio transmitter won a top prize at the Innovate Salone’s innovation contest held in his country. He taught himself how to do incredibly intricate things with very few resources. He created a local radio station using scrap pieces because he wanted to give voice to young Sierra Leoneans.

ALSO READ: All It Took Was One Visit And Lucia Bakulumpagi Moved To Uganda From Canada To Build An Empire

His innovations earned him a trip to the US. His creativity and innovations wowed researchers at the MIT Media Lab. He is the youngest person in history to take part in the “Visiting Practitioner’s Program” at MIT. Doe is the founder of KDoe-Tech, a technology company, and the Kelvin Doe Foundation. The young innovator from West Africa is one of the Honorary Board members of EMERGENCY USA.

Kelvin Doe was born in 1996 in Freetown, Sierra Leone. Doe, the youngest of five children, grew up in an area of Sierra Leone’s capital that was rough. Power outage was common in the area. It was so bad that the residence only gets electricity once per week—and only for a few hours. The community relied on batteries to power flashlights and radios. But Kelvin was not at peace with the high cost of batteries. So, this challenge inspired him to think and look for a cheaper alternative to the power problem.

At age 11, he started collecting scrap electronic products from dumpsites. After school, he used to dismantle these items to find out how they work. Often time, when his mother met him in the living room, she used to liken it to a scrap metal yard. With time, he understood how they function. Subsequently, he started taking different parts and assembling his own contraptions. Young Kelvin was the go-to person whenever his friends wanted their electrical devices fixed.

Doe’s love for innovation and creating new things saw him make a battery that powered people’s houses. He also made an FM radio transmitter to give voice to the youths. Furthermore, the young inventor made a microphone receiver, three-channel mixer, and sound amplifier all from salvaged parts. Using these inventions, Doe set up a local radio station, which he broadcasted under the name – DJ Focus.

He says, “They call me DJ Focus because I believe if you focus, you can do an invention perfectly”. He often entertained the community by playing music. Also, Kelvin Doe mobilized some schoolmates to help him collect news. Also, he designed a generator from his hoard of scrap pieces to supply current to his radio station.

The brilliance of the young Sierra Leonean and his innovations couldn’t go unnoticed. A local television station discovered his work and interviewed him. Around that time, he participated in a youth innovation competition organized by Innovate Salone, a local mentorship program. Kelvin’s homemade FM transmitter was among the winning projects. The organizer of the program, David Sengeh, was impressed by Kelvin’s creativity.

Journey to the United States

Sengeh, the then Ph.D. student at the Massachusetts Institute of Technology (MIT), organized a trip for Doe to the US. The young innovator from Sierra Leone, who had not traveled past 10 miles from his home, landed in America. Kelvin’s innovation was discovered by MIT, which is one of the greatest innovation places in the world. In 2012, he made history by becoming the youngest innovator ever to be invited to the Institute’s Visiting Practitioner’s Program.

Kelvin’s world expanded greatly during the three weeks he had hands-on research and experience at the MIT Media Lab. During his US visit, the Sierra Leone innovator was invited to speak at the Maker Faire’s show in New York. He talked at the TEDxTeen and met with the then President of Harvard University, Drew Faust. The amazing story of Kelvin Doe spread like a bushfire across the world after a video about his trip went viral. Lots of people sent their donations and several schools in the US offered him a scholarship.

Since coming to the limelight, Doe has kept up the momentum. He is now living and studying in Toronto, Canada. Kelvin is pursuing an entrepreneurship program as well as working on more innovations. He hopes to return to Sierra Leone someday and support young innovators. He believes that if young people are empowered, they can play a significant role in solving the problems facing Africa and changing the African narrative.

At the age of 20, Doe founded a tech company, KDoe-Tech, and the Kelvin Doe Foundation. His company based in Freetown develops and sells electronics. Additionally, it provides electrical and logistics services.

The Kelvin Doe Foundation is a non-profit organization that supports young Africans to design innovative solutions. In doing that, young people will be able to solve many problems in Africa. Kelvin engages government leaders, the private sector, educators, and global visionaries to support hands-on and experimental learning programs in Africa.

According to Kelvin Doe, “creativity is universal and can be found in places where you least expect. Perseverance and Passion are essential to nurturing that creative ability.” The young innovator believes that Africans have what it takes to change the narratives about the continent.

Advertisement
ALSO READ: Returnee Spotlight: Adaora Mbelu-Dania, The Founder Of A2 Creatives Is A Firm Believer In Reverse Brain Drain

Therefore, should not wait for anyone to solve African problems. His story shows that lack of resources should not hinder young Africans from realizing their dreams. Kelvin is a testament that Africans have solutions to African problems. All they need is creativity and ambition to achieve what they want in life.