Africa is blessed with an abundance of resources. This includes several beautiful and exclusive wildlife species. However, the continent also suffers growing mismanagement of most of its resources. In order to save endangered animals, different African governments and organizations run zoos and conservancies. Kenya has been the center of attention recently for a sad reason. Its near-extinct white giraffe population just went down to one.

The regular giraffe is naturally conspicuous for long neck and characteristic skin patterns. However, White giraffes have a condition known as leucism. This condition results in a pigment defect leading to pale or patchy skin color. This rarity makes the white giraffe special. However, their higher aesthetic value makes them the target of poachers.

The International Union for Conservation of Nature (IUCN) is responsible for taking measures to safeguard and preserve nature globally. According to the union, the number of giraffes in Africa now is just about 16,000. However, the white giraffe which is only found in Kenya is nearing total extinction. The African Wildlife Foundation also supports this claim saying, “the world’s tallest animal has lost 40 percent of its population in just 30 years”. 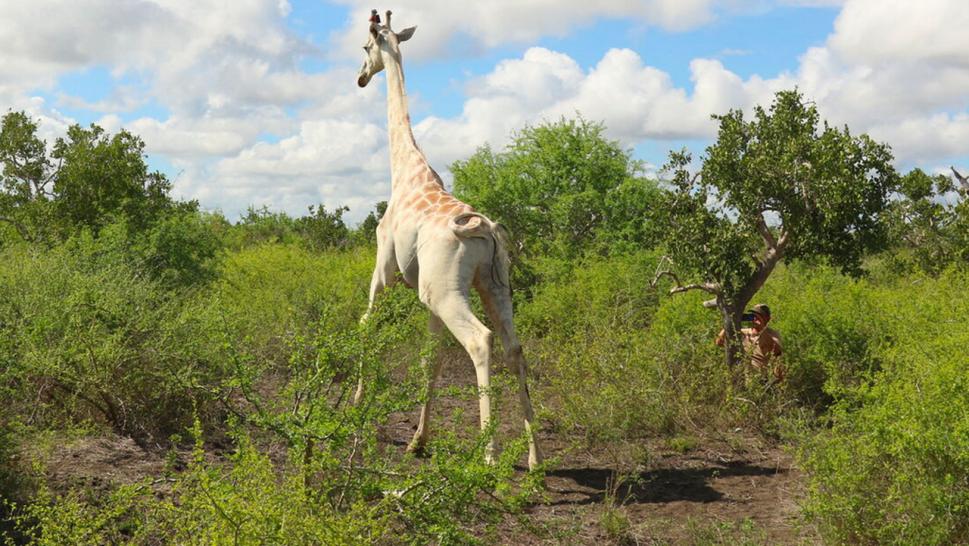 The Northern Rangelands Trust serves and supports 39 community conservancies covering 42,000 square kilometers in the northern Kenyan region. It also works to build peace, create employment opportunities, and develop sustainable economies through international fundraising and quality management. Under its care is the Ishaqbini Hirola Community Conservancy in Garissa County where the only known white giraffe thrives.

The Northern Rangelands Trust found two of the last three white giraffes dead on March 10, 2020. It is believed that the giraffe’s mother, popularly called Omo after a local detergent, and her seven-months old calf were killed by poachers in the Ijara town of Kenya’s Garissa County. This sad event sent a widespread shock throughout the community.

The loss of the White giraffe mother and her calf is devastating to both the community and international conservationists. This tragedy inspired a request by the board of Ishaqbini Community Conservancy to the Kenyan Wildlife Service (KWS) for GPS tracking of the remaining male white giraffe. ‘Save Giraffes Now’ and the Northern Rangelands Trust also backed the exercise carried out on November 8, 2020.

READ MORE: ‘Sides Of A Horn’ Movie Explores the Complexity Behind Poaching In Africa

A Global Positioning Satelite (GPS) unit mounted on the horn of the sub-adult male will allow rangers to monitor his movements on an hourly basis. Hopefully, this will ensure that the animal is safe from poachers. It will also allow quick tracking and recovery of the animal if need be. Ahmed Noor, the manager of Ishaqbini Hirola Community Conservancy expressed gratitude in a statement

“We are thankful for the tremendous help from KWS, Save Giraffes Now, and the Northern Rangelands Trust in furthering community efforts to safeguard wildlife species”.

Too late for conservation?

The death of Omo dashed the hopes of seeing a new generation of the beloved species. This has raised arguments of the necessity of closely guarding the last known male white giraffe. However, leucism is hereditary. This means that there is still a chance that mating the remaining white giraffe with the regular ones may still lead to the birth of a white giraffe. If this fails, scientists can still engineer a new generation of white giraffes in the lab. However, they will need cells from the last male. This is the more reason why he should be guarded jealously.