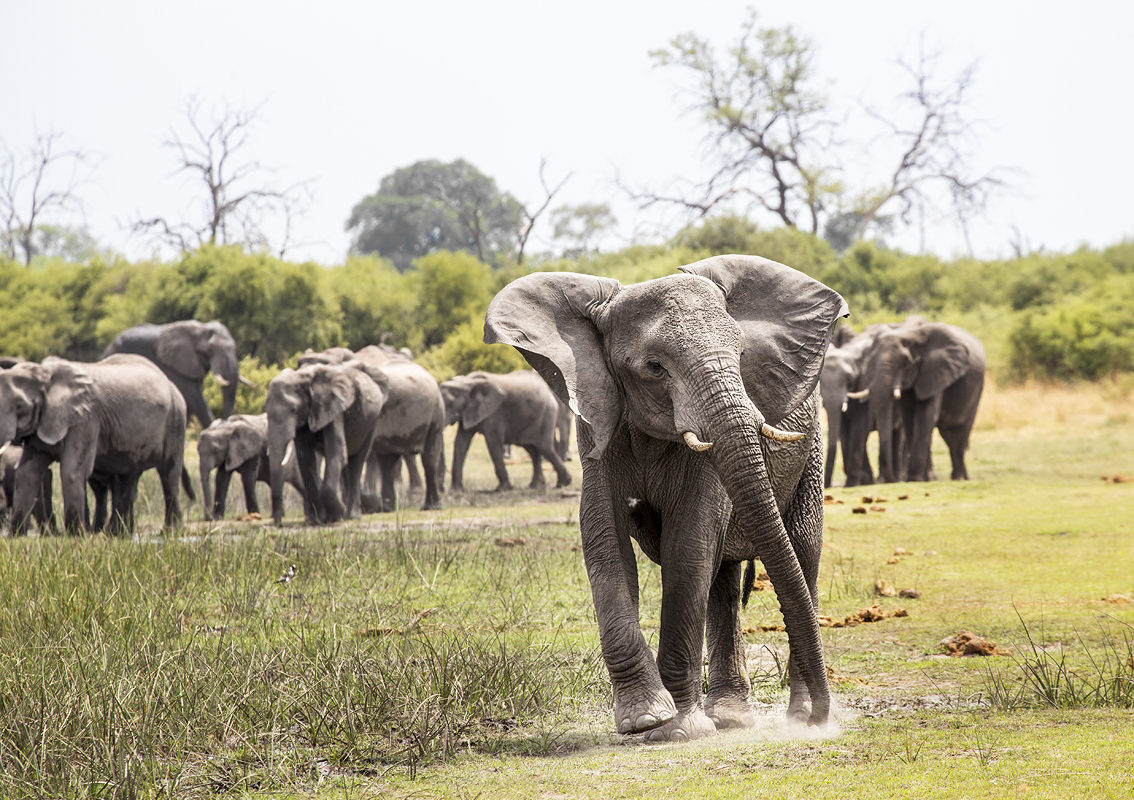 Zimbabwe wildlife- A herd of elephants near the Linyanti River in northern Botswana. Image by Roger Borgelid for Mongabay.

Zimbabwe has a growing population of wildlife, particularly elephants and lions. Since the ban on wildlife trade nine years ago by the Convention of International Trade in Endangered Species (CITES), Zimbabwe has Ivory worth US$600 million which it cannot sell. This money, according to the president, can fund Zimbabwe wildlife conservation for two decades. Consequently, Zimbabwe has more elephants than it can handle. The president is considering selling or donating some of Zimbabwe wildlife to Angola.

Zimbabwe wildlife, particularly the elephant population is about 84,000. However, the country has a carrying capacity of about 54,000. President Emmerson Mnangagwa said the gesture will help Angola to restore its wildlife. Angola lost most of its wildlife species to civil war. In a recent interview with journalists in Victoria Falls at the end of 2-day African Union/United Nations Wildlife Summit, the President said,

ALSO READ: Zimbabwe Has A Plan To Deal With People Who Cannot Justify Their Wealth

“Zimbabwe wildlife has an excess of 30 000 elephants. We are willing to donate or sell some of these to our sister countries so that they grow their animal populations. Angola, because of war, has a lot of landmines and most of its wild animals moved south. So we are now cooperating with Angola to raise funds to demine. And we will give them elephants, giraffes, buffaloes, lions which I believe is humane.”

A call to lift the ban on ivory sale

No doubt, there are still cases of elephant poaching across Africa. If left unchecked, Zimbabwe wildlife and others across the continent risk extinction. However, there are countries who depend on the sale of wildlife and ivory to earn foreign exchange. For example, in May 2019, Zimbabwe realized $2.7 million from the sale of over 90 elephants to Dubai and China.

Consequently, Zimbabwe, Namibia, Botswana, and Zambia are calling for lifting the ban on the sale of ivory. These countries in combination have more than half of the world’s elephants. South Africa is backing their demand. Consequently, all Kavango-Zambezi Transfrontier Conservation Area (KAZA TFCA) and Southern African Development Community (SADC) countries agree to lift the ban. In a previous interview with David McKenzie of CNN, Kitso Mokaila, Botswana Minister of Environment said,

Advertisement
ALSO READ: Zimbabweans To Enjoy More TV Stations Before The End Of 2019

“The whole world right now is trying to close those ivory markets, and the question is, are we sitting on a ticking time bomb? Because when people eventually say ‘we are sick and tired of being zookeepers’ … when there is no return in investment and they go randomly out there and massacre them, that is the real problem.”

The AU-UN Wildlife is of the opinion that people living close to game parks should be part of conservation management. However, rural farmers often complain that elephants invade their lands and destroy crops. Zimbabwe wildlife agency said the revenue from the ivory sale will be used to support conservation.