Nigeria And Ethiopia Agree On Visa Waiver. What It Means For Both Nations 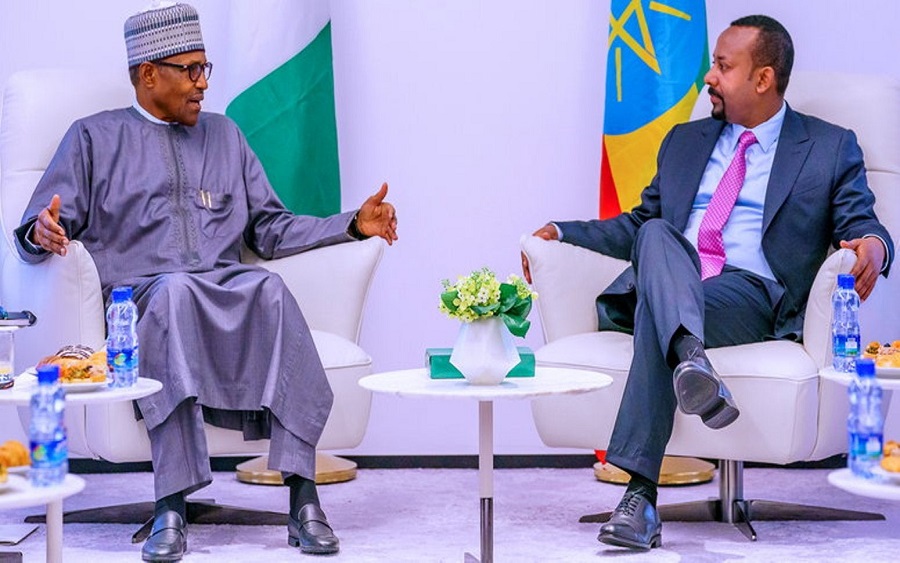 Nigeria and Ethiopia share a mutual relationship that dates back before Nigerian independence. However, both countries recently took that relationship a step further with the signing of a visa waiver agreement for diplomatic and official passport holders. Consequently, the visa waiver agreement will ease the travel of officials between both countries. Also, it will contribute to the strengthening of bilateral relations.

Signing the agreement for Nigeria was the Foreign Affairs Minister, Geoffrey Onyeama while his counterpart Gedu Andargachew signed for Ethiopia. According to a statement credited to Nigerian presidential spokesman, Malam Garba Shehu, the signing was during President Mohammadu Buhari’s state visit to Prime Minister Abiy Ahmed. The statement also shows that the agreement goes beyond the visa waiver to military cooperation. It read,

“The MoU will also enhance bilateral military cooperation in the areas of training and education, technical assistance, exchange of visits and defense technology transfer. It also entails cooperation in peace support operation issues within the framework of the respective laws of the Parties and on a reciprocal basis.”

The Meaning of the Visa Waiver Agreement to Nigerians and Ethiopians

The first misconception on reading this development would likely be that anyone with a Nigerian passport can fly into Ethiopia and vice versa. However, that is far from the truth. The benefit only applies to those with official passports. There are three types of passports, diplomatic, official, and standard or regular.

While it is possible for one person to hold all three types of passports, only a few get that privilege. In Ethiopia, Immigration Authorities issue nationality (standard) passports. However, service (official) and diplomatic passports can only be issued by the Ministry of Foreign Affairs.

According to the Nigerian Immigration website, official passports can only be issued to high-ranking government officials and 1st Class Chiefs. The requirement for obtaining this category of passport is usually steeper than the requirements for standard or regular passports. Thus, the new agreement is aimed at making it easier for the governments of both countries to cooperate. Holders of standard or regular passports will still need a visa to enter either of both countries.

Ethiopia opened its embassy in Lagos, Nigeria in 1961. Consequently, both countries have been making efforts to consolidate their bilateral relations. The visa waiver agreement further eliminates any restrictions that will hinder both countries from sharing ideas. For example, in June 2000, Nigeria and Ethiopia signed an agreement that saw Nigeria provide Ethiopia with teachers for various universities and high schools. Ever since, Ethiopia has become the leading beneficiary of Nigeria’s Technical Aid Corps.

According to President Buhari, the cooperation between the two countries will provide a strong pillar for African integration. President Buhari also reiterated that the cooperation will have a positive effect on the African Continental Free Trade Area (AfCFTA). Nigerian President also pointed at the similar challenges facing both nations as the most populous countries in the continent. In reaction, Prime Minister Ahmed said,

“Ethiopia is facing big challenges in this regard and our party leadership will like to learn from Nigeria on how to tackle this challenge and to unify Ethiopia, East Africa and the continent at large.”

The Relevance of Military Cooperation

Nigeria and Ethiopia face similar security challenges. For example, there was political unrest in the Oromia region in Ethiopia in late 2019 which led to the death of scores of people. Similar political unrests are also common in Nigeria. Also, Nigeria has been fighting for over a decade to contain the Boko Haram terrorist groups. Therefore, Mr. Shehu explains,

“MoU on defense cooperation is important to both countries in the coordination of efforts in the fight against terrorism and securing peace and stability in their respective sub-regions, as well as on the continent of Africa.”

Negotiations on the revised Bilateral Air Services Agreement as well as MoU on cultural cooperation are still ongoing. However, both sides are making efforts towards their speedy completion. When these agreements are signed, it will deepen existing air transport services, tourism and cultural exchanges between both countries. In a show of reciprocity, President Buhari extended an open invitation to the Ethiopian Prime Minister.