Many Africans and Africans in the diaspora believe that revolution is the solution to the continent’s numerous problems. Therefore, many youths quickly take to the streets at the slightest provocation. Perhaps, it is the only way they feel they can get the attention of the authorities. It is ten years since the ‘Arab Spring’. That was one of Africa’s biggest revolution to date. However, did it bring about any positive change?

African Americans or Africans in the diaspora often think the youths in Africa are not doing enough. This is because protests in western countries are often easier and more organized. Also, the right to protest is respected by the authorities in most western countries. In Africa, it is a different ball game. Street protests are harder and often met with harsh police crackdowns.

The Arab Spring was the one time that a police crackdown was unable to stop the public protest. However, it seems the best those revolutions were able to achieve was a change in government. For some, life has become harder after all the protest adrenaline rush. So, what is a better solution?

Tracking the origin and success of the Arab Spring

In the town of Sidi Bouzid in Tunisia ten years ago, a fruit seller set himself ablaze. This was following an altercation with a policewoman regarding where he put his cart. His action sparked nationwide protest which eventually led to the toppling of the government. However, it did not end there. The so-called Arab Spring spread across the Arab region. Huge demonstrations broke out in Egypt and Libya and also spread to Syria and Yemen.

Today, Tunisians can choose and criticize their leaders. This was not possible before the Arab Spring. Nevertheless, a lot of Tunisians look back at the events of 2010 with regret. Obviously, life has become better in some areas and worse in others. However, many believe the revolution only made things worse. In the southern towns of Tunisia, a new wave of protests are springing up over rising unemployment, growing inequality, and poor state services.

Overall, Tunisia has not changed for the better. The policewoman that confiscated Bouazizi’s cart a decade ago leading to the uprising still patrols the street. She continues to move unlicensed vendors from their pitches. The anger today seems to be bigger than that of the past. 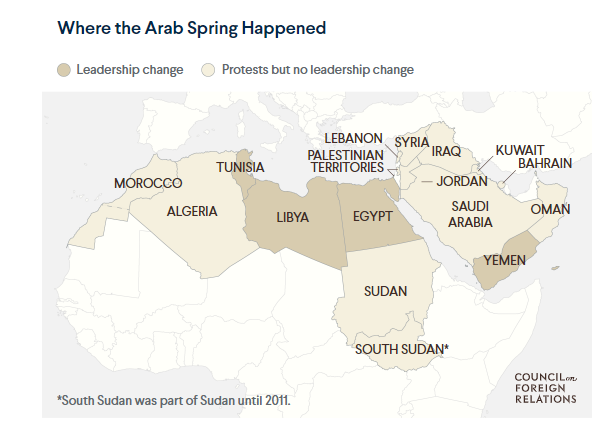 The Arab Spring was not without bloodshed. Syria is still feeling the ripple of the failed attempt to topple the government. However, Tunisia’s path to democracy is remarkably more peaceful. Nevertheless, more and more Tunisians are desperately trying to leave the country illegally. It appears the government doesn’t know what the people want. 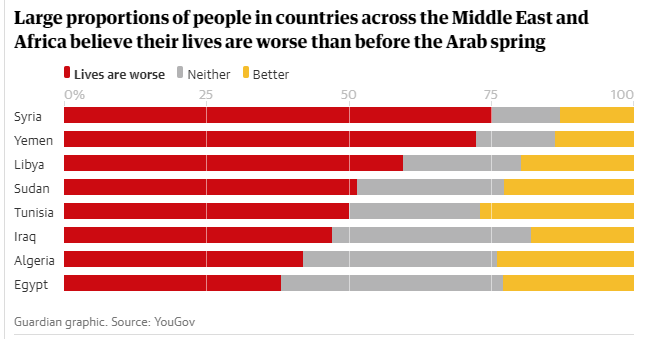 In 2019, the elections failed to produce a stable government. Parties continue to fight over cabinet seats at the detriment of life-changing decisions for millions of Tunisians. Speaking to Reuters, a jobless sports teacher, Abdullah Gammoudi paints a heartbreaking picture of the situation in Tunisia. He said,

“We have geniuses here – doctors, engineers. I know a guy who is a mechanical engineer. What does he do now? He sells weed just to live.”

Attia Athmouni is a retired philosophy teacher that helped to lead the uprising after Bouazizi’s death. He agrees that not much has changed over the decade. In his words, according to Reuters, 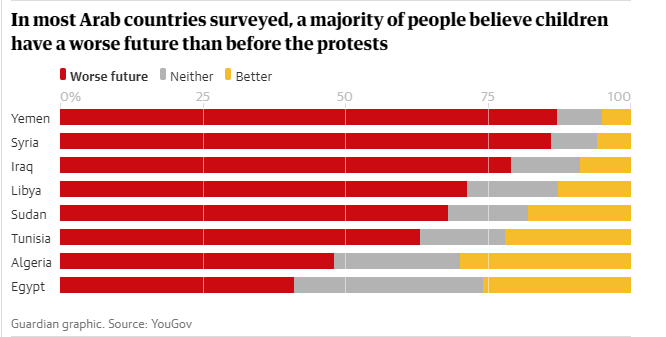 “There is a rupture between the politicians and the people now because the system cannot understand the demands of the street. I’m convinced the revolution is continuous. This year the anger is bigger than in the past.”

Statistics showing life after the Arab spring in some key nations

Tunisia is one of the nations that has witnessed significant improvement in numerous areas after the Arab Spring. Sadly, Libyans cannot say the same. Below are statistics that will help you to understand what life has become in some of the affected nations. 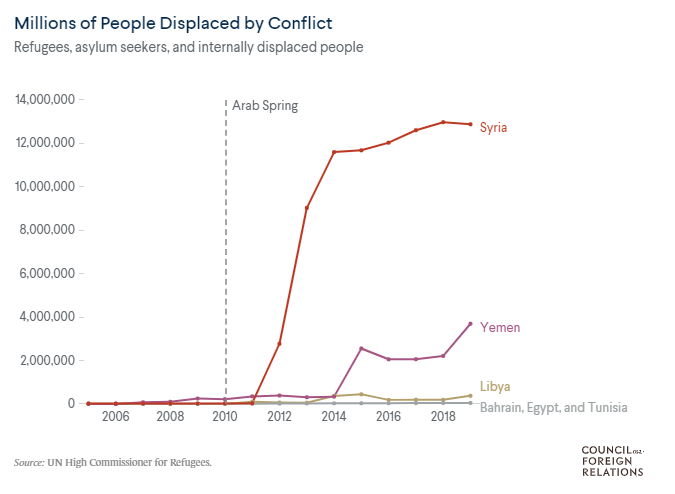 ALSO READ: #EndSARS: How Can We End Police Brutality In Africa? 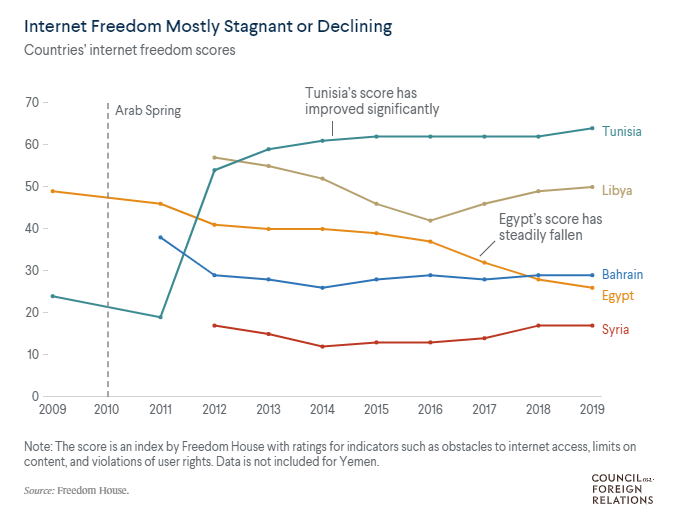 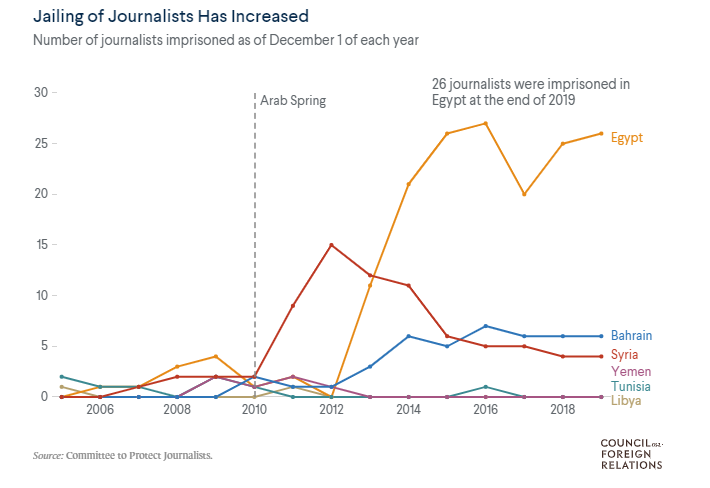 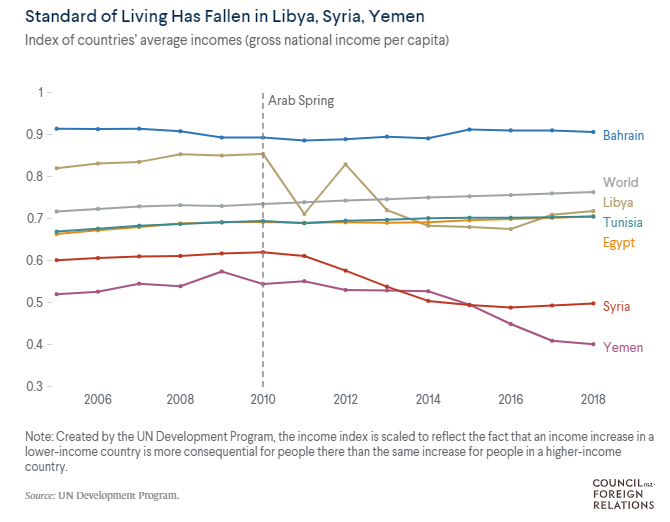 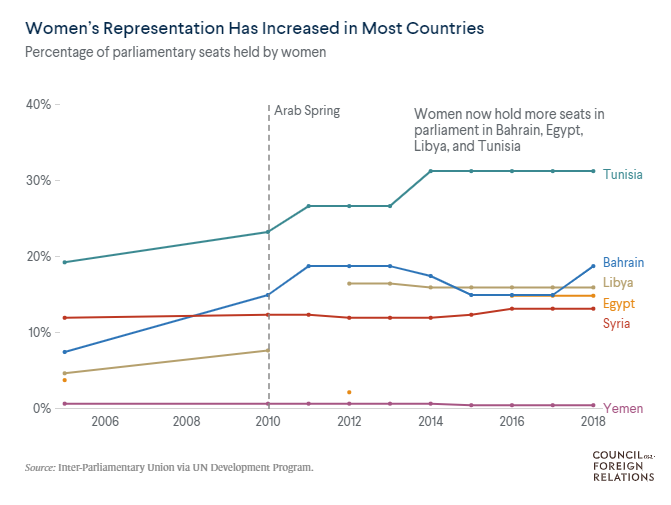 ALSO READ: 10 Lessons By PLO Lumumba That Can Spark Mental Shift In Africa 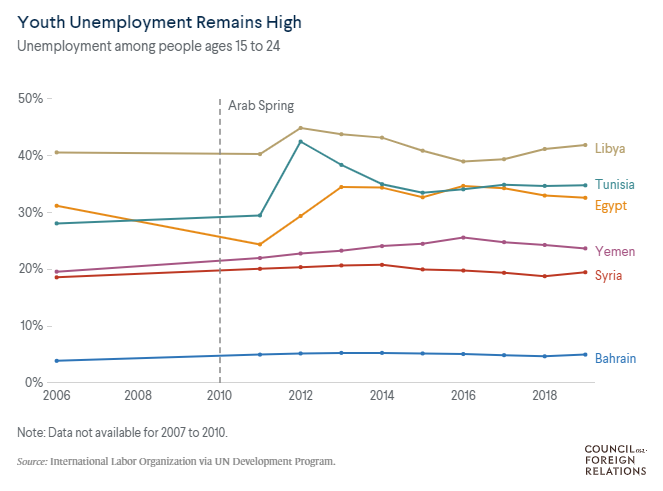 Public protests are important. In fact, various African nations have used street protests to achieve incredible feats in recent years. In Sudan, it led to the ouster of Omar al-Bashir. Also, Nigerian youths used #EndSARS public protests to end a rogue police unit. However, the end of one problem is often the beginning of another—as evident in the Arab Spring.

The participation of Africans in the diaspora often helps to put pressure on African governments thereby bringing about the much-needed change. For example, African governments often crackdown on the press during a revolution to put a veil on the happenings in the country. However, it takes external help to beam light at such times. The point is, Africans in the diaspora have a key role to play in the success of any African revolution.

However, a revolution should never end with the ouster of a government. Like Athmouni mentioned, it should be a continuous process. Therefore, every revolution should converge at a negotiation table where the government and the people will continue to dialogue. Even if a government refuses to speak to the locals, they cannot ignore Africans in the diaspora. Africans in the diaspora play a huge role in the GDP of most nations and the government can’t afford to lose that.