Over the years, Ebola has been one of the dreaded viral diseases ravaging through Central Africa particularly the Democratic Republic of Congo (DRC). However, there has been spillover into West African states in the past including Nigeria. The recent outbreak in DRC—considered second-deadliest ever—has prompted researchers to try 4 drugs on patients.

The result shows that 90% of patients can survive if the treatment is administered early. According to officials, the drug will now be used to treat all patients in DRC. Statistics shows that Ebola has killed over 1,900 people in DRC over the past years. The latest development suggests that Ebola is now ‘curable’—a status that was hitherto considered impossible.

Here's some good news: Doctors and scientists have finally found a way to cure Ebola. Here's how it works: https://t.co/hg4AlN2R79

Two of the drugs used in the trial are mAb114 (a monoclonal antibody) and REGN-EB3. The former was developed using antibodies harvested from survivors while the latter comes from antibodies of mice infected with Ebola virus. The co-sponsor for the trial is the US National Institute of Allergy and Infectious Disease (NIAID). The other two trial drugs are Remdesivir and ZMapp. However, they have been dropped for being less effective. The director of NIAID, Dr. Anthony Fauci, said,

“ first drugs that, in a scientifically sound study, have clearly shown a significant diminution in mortality . It means we do have now what looks like treatments for a disease which, not too long ago, we really had no therapeutic approach at all.”

How the Ebola trial drugs work and the result

The drugs mAb114 and REGN-EB3 work by attacking the virus with antibodies. Consequently, this leads to their neutralization thereby causing less impact on human cells. The trial for the Ebola drugs began in November last year. The trial was by an international research group under the coordination of the World Health Organization (WHO). So far, 700 patients have received 4 experimental drugs.  However, the result of 499 preliminary trials shows mAb114 and REGN-EB3 are more effective.

“ the closer we can get to turning Ebola from a terrifying disease to one that is preventable and treatable. We won’t ever get rid of Ebola but we should be able to stop these outbreaks from turning into major national and regional epidemics.”

History and trend of the outbreak 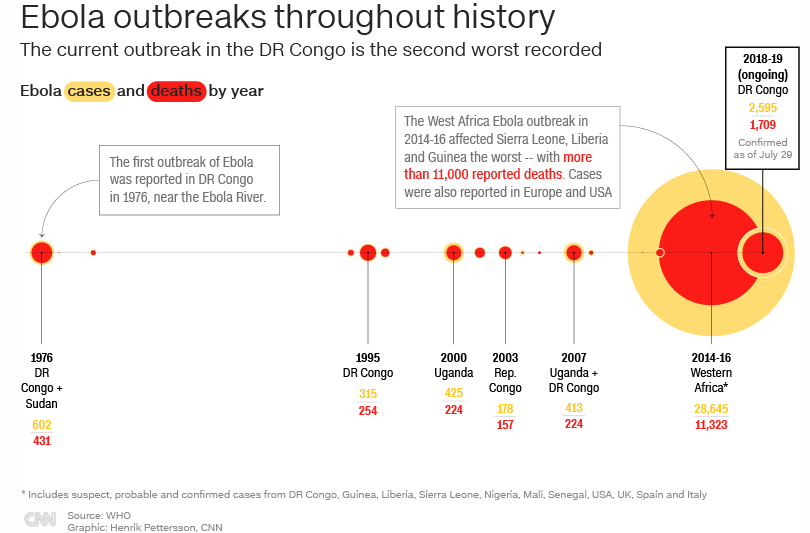 Ebola virus was first discovered after an outbreak near the Ebola River in the DRC in 1976. The virus present symptoms like headache, fever, vomiting, muscle pain, diarrhea, and unexplained bleeding. The virus was first zoonotic, moving from animals, like bats, to man. Subsequently, it spread from person to person. The mechanism of spread is through direct contact with body fluid of infected person. This includes vomit, feces, and blood. The virus can also spread through contact with contaminated objects like syringes and needles. Death results from multiple organ failure and dehydration.