The 2020 World Happiness Report by the Sustainable Development Network is out. From it, we derived the 10 happiest African countries. This year’s release delves even deeper into the facets of livelihoods of people spread across the 156 countries of its scope. For the first time, it “ranks cities around the world by their subjective well-being and digs more deeply into how the social, urban, and natural environments combine to affect our happiness.”

Each of the previous reports has had a unique theme. This year, the theme is ‘Environments for Happiness.’ It is quite interesting to see that some of the countries featured are not performing well economically. In 2019, Mauritius topped the list of happiest African countries, followed by Libya, Nigeria, and Algeria. Ghana and Benin also made it to the list. The least happy African countries of last year included South Sudan, Rwanda, and Zimbabwe. Finland ranked the highest globally and scored 7.828 points.

The key factors in determining the level of happiness include GDP per capita, social support, life expectancy, freedom to make life choices, generosity, and corruption levels. All African countries that made it to the list have one thing in common; they all ranked highly in these factors.

The USA, despite being the world’s largest economy, is at number 19. This shows an excellent GDP alone does not guarantee happiness. Corruption, lack of trust in the social and civic systems, poor health and educational systems are some of the things that can make a country rank low. In Africa, there is so much to say about the countries that made it on the list.

On page 55 of the report, the following African (represented by cities) were ranked highly under ‘current life evaluation’. Their citizens are not so worried about their well-being. This indicates a satisfactory level of happiness. Here are endearing fun facts about these countries.

We like to liken Morocco to a gem. Apart from being the childhood home of rapper French Montana, it is also the location of Africa’s largest wind farm. The country joined the United Nations on November 12, 1956. Many movies have been shot there, including Mimosas and Son of God. Morocco has the second-largest film set in the world.

The oldest and still existing university in the world is in the country. It is the University of Karueein, which was founded in 859 AD in the city of Fes. Think that your once-in-a-month green tea regimen is the best?

Well, in Morocco, green tea with mint is their favorite drink.  Morocco’s latest GDP is 110 billion USD and a life expectancy of 76 years.  The life expectancy is among the highest in Africa, 76.  The country came in at number 137 globally and earned 5.180 points.

In a country where the official language is French, surfing is a revered activity. In fact, Senegal was used as a film location for the movie The Endless Summer that was released back in June 1966. This is because of its fabulous sunshine and beautiful beaches.

The country was under colonization for 300 years, which is quite a long time. However, having gotten its independence in 1960, the country has quickly established itself as a global hub for agricultural and mineral exports. Senegal is known for its amazing peanuts, millet, and sorghum. It exports petroleum products, fish, phosphates, and cotton.

ALSO READ: Senegal Is Developing A Hand-Held Kit That Can Detect COVID-19 In 10 Minutes

In 2022, Senegal will become the first African country to host the Youth Olympic Games. They will happen across three main cities; namely Dakar (the capital), Saly and Diamniadio. An even more surprising fact is the fact that despite 93% of Senegalese people being Muslim, the first president Léopold Sédar Senghor ( in office from 1960 to 1980) was a catholic man.

According to Worldometer, Senegal’s latest GDP per capita is 21.07 billion USD with a life expectancy of 67 years. The country took number 132 in the World Happiness 2020 report and earned 5.256 points.

The country was the film location for the award-winning film Mad Max: Fury Road. Namibia is a premier tourist destination that boasts of a wide range of geographical resources. Fondly known as “the land God made in anger”, it is also the place where Prince Harry and Meghan Markle had their honeymoon. Another interesting fact is that it is home to the world’s oldest desert, the Namib, which is over 55 million years old.

While Somalia has rock art, Namibia has the largest collection, dating more than 6,000 years. More fascinatingly, it has desert elephants that have adapted to the environment by developing longer legs, larger feet, and are smaller in size. This enables them to travel long distances—covering dunes—in search of water. Namibia’s latest GDP is 13.25 billion USD and a life expectancy of 63 years. Namibia made it to number 131 with 5.262 points.

The West African country, home to Shatta Wale and Asamoah Gyan was the first African country to gain independence from colonial power back on March 6, 1957. It is home to the world’s largest manmade lake, Volta. The name Ghana means warrior king. As of 2019, the country is the second-largest producer of gold and is presumably going to overtake South Africa in the not so distant future. This was the origin of the moniker ‘The Gold Coast’.

Ghana is home to the oldest European-built castle in Sub-Saharan Africa. The Elmina Castle was constructed around 1482 and the name denotes ‘gold mine’. In 2017, Ghana launched a space satellite. The project cost 500,000 USD and has been one of the most notable scientific developments in Africa. Ghana’s latest GPD is 59 billion USD and a life expectancy of 63 years. Ghana appears at number 129 on the global ranking with 5.267 points.

In a previous article, we gave you insight on how Freetown, the capital of Sierra Leone was once used as an example of a failing Africa. However, decades later, Africa is steeply rising.  This country has rich wildlife that ranges from mangrove swamps to beautiful mountains. The country was colonized by Britain for more than 150 years and gained its independence in 1961.

The country also boasts one of the oldest police forces on the continent. Hers was created back in 1894. The country got its name in 1462 after Portuguese explorer Pedro da Cintra encountered the now known as Freetown Peninsula. He named the country “Sierra Lyoa” which denotes “Lion Mountains” in native Portuguese.

Despite the fact that the majority of Sierra Leoneans are Muslim (78%), there is a high tolerance between people. Christians make up 20.9% of the population, according to the Global Religious Futures Project. The Tacugama Chimpanzee Sanctuary, which is not far from Freetown, was established back in 1995 to help in the conservation of the primates.

They are under constant threat due to illegal hunting for food and ownership within the West African country. Recent GDP per capita data from Worldometer shows that the country is at 3.78 billion USD. The life expectancy is 53 years. In the World Happiness report, it appeared at number 125 globally with 5.293 points.

Apart from having Africa’s longest coastline—at 3,025 km—it is also the country with the Laas Geel cave paintings. The phenomenal, iconic prehistoric wonders were discovered back in 2002 and date back up to 20,000 years. Despite being a war-torn country as well as endure attacks by pirates, it still made it to the list of the happiest African countries.

The country has the lowest HIV/AIDS infection rates in East Africa. Somalis also make sure that their homes smell good, by burning incense. Before the 1991 civil war, Somalia used to be a popular tourist destination. However, it now relies on exporting charcoal, skins, bananas, and scrap metal. As of 2018, Somalia’s GDP was 4.721 billion USD with a life expectancy of 56 years. Somalia, represented by Mogadishu, appears at number 123 worldwide on the 2020 listing and has 5.304 points.

The southern African nation was the third most-visited country on the continent in 2019, just behind Egypt. South Africa boasts of a multicultural population. The country is synonymous with ‘post-apartheid’, a word that Archbishop Desmond Tutu coined. Despite having an alarming rate of femicide and apparent xenophobia, the country has plenty of amazing stuff to offer.

With its progressive nature, South Africa became the first African country to recognize same-sex marriage in 2006. So, it is normal for the LGBT community in the country to show off on social media without cyberbullying or tribulations like in most other African countries. Another interesting fact is that the country’s Table Mountain is about 260 million years old.

South Africa has the second-highest GDP in Africa, with 349 billion USD and a life expectancy of 63 years. The world happiness report shows that South Africa is at number 120 globally, with 5.361 points. 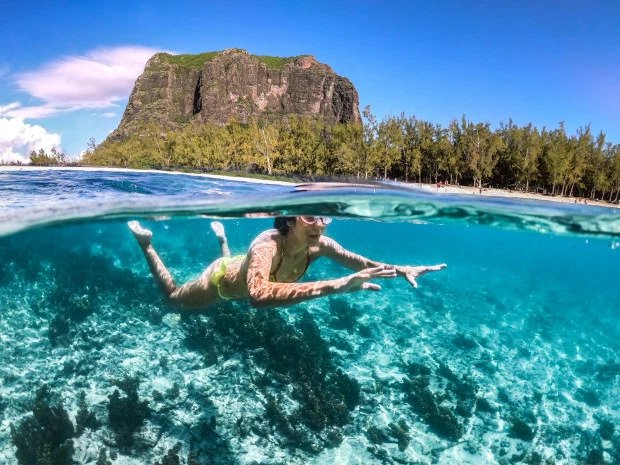 The Indian Ocean island has consistently been part of this list for the last few years. Known for its iconic—now extinct—bird called the Dodo, the country has many islands. Also, there is no official language in the country. However, English features prominently. The country also has two UNESCO World Heritage sites; Aapravasi Ghat and Le Morne Brabant.

It’s the only country in Africa with a Hindu majority in religion, at 49%. Mauritius has the largest population density in Africa, despite having just above 1.2 million people. The country has a GDP of 13.27 billion USD according to the latest Worldometer data. It is at number 104 according to the 2020 world happiness global ranking with 5.616 points. Life expectancy in a small country is 74 years.

It is a landlocked country located in West Africa. Currently, the President is Mahamadou Issoufou, who has been the leader since April 7th, 2010. It is rather interesting to see this country on the list as it has a history of political instability since its independence. The most recent was in 2007. The country is literally on the border of the Sahara and Sub-Saharan Africa. Also known as the “frying pan of the world”, Niger is one of the hottest nations in the world. The capital, Niamey experiences highs of up to 41 degrees.

The fact that Niger is also one of the poorest countries in the world but still makes part of this list is truly intriguing. Despite Niger having a very low GDP of 8.12 billion USD, it still one of the happiest African countries. In fact, it is second on our list.  According to the happiness report, Niger is at number 100 on the global ranking with 5.676 points.

This northern Africa country is super interesting in several ways. Besides, it owes no other country money. It is debt-free. Morever also the largest country in Africa and the 8th largest globally. Despite its large size—2,381,741 square kilometers—only twelve percent is inhabited.

ALSO READ: These Are The African Airlines On The World’s Best 100 Airlines of 2019

The country’s literacy rate is at 80% and there is ample health care. Its free-t0-access health system dates back to 1974. Additionally Algeria has participated in the Summer Olympics since 1974. In 2019, Algeria had a global position of 88 in the World Happiness Report and number 4 in Africa.

Toping the list of the happiest African countries is a significant improvement. Algeria has a GDP of 168 billion USD. According to the World Happiness Report, Algeria is at number 93 globally on the list, with 5.781 points. The country has a life expectancy of 76.

As you’ve seen, African countries have exotic, unique, and unmatched endowments; be it cultural heritage, wildlife, or arable land.  Above that, Africans have access to the most unique food, clothing, rivers, animals, music, and less polluted skies. The African countries that made the World Happiness Report 2020 list indicate that happiness is innate in the continent.  Do you truly agree with the list? Let us know in the comment section!