Early studies suggest the novel coronavirus is killing African Americans at a higher rate. This finding was revealed by Washington Post’s analysis of early data from across the United States. No fewer than 14,000 Americans have lost their lives to COVID-19 with over 430,000 confirmed cases. America is currently the country with the most coronavirus infections in the world.

Not all jurisdictions report their coronavirus deaths by race. However, for those that do, the statistics clearly show that African Americans are dying the most from the contagion. The highest number of Black American deaths is in Milwaukee County, Wisconsin. Inasmuch as African Americans make up only 26% of the population, 73% of the total deaths here are African Americans. 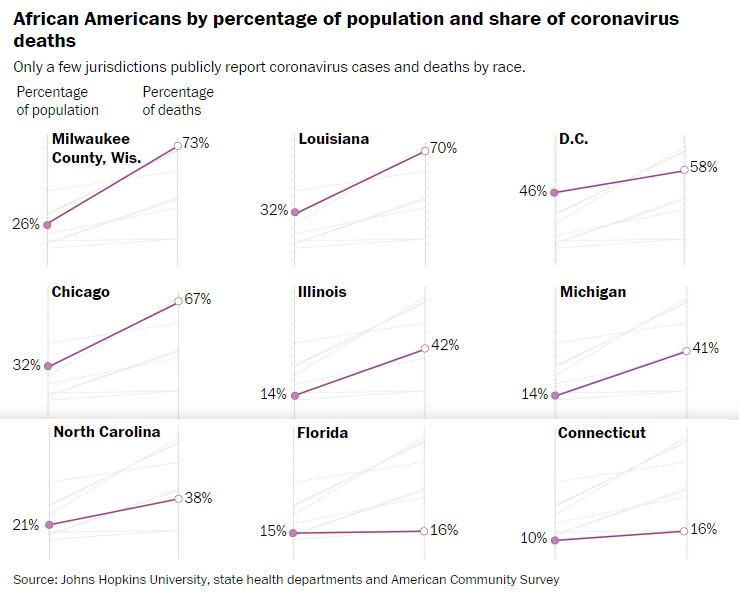 ALSO READ: Here’s How Some African Celebrities Are Supporting The Fight Against COVID-19

In comparison to other races, African Americans have 6.3 deaths per 100,000. Asia has the lowest mortality of 0.4 per 100,000. President Trump admitted this disparity during a White House task force briefing on Tuesday 7th April 2020. Consequently, the president said the director of the National Institute of Allergy and Infectious Diseases, Anthony S. Fauci, “is looking at it very strongly”. Acknowledging this fact, President Trump said,

“We are doing everything in our power to address this challenge, and it’s a tremendous challenge. It’s terrible. Why is it three or four times more so for the black community as opposed to other people? It doesn’t make sense, and I don’t like it, and we are going to have statistics over the next probably two to three days.”

Data is essential for equitable distribution of wealth in a society. Troubled by the racial disparity of people dying from COVID-19, Lawyer’s Committee for Civil Rights Under Law on Monday 6th April 2020 joined with medical professionals demanded the immediate release of ethnic and racial data on coronavirus testing, infections, and deaths. Kristen Clarke, the president and executive director of the Lawyer’s Committee for Civil Rights Under Law said,

“Civil rights laws prohibit federally funded health care providers from administering services in a discriminatory manner. Our ability to fully understand and confront this pandemic requires and demands that we obtain racial data now. This is a crisis like none other and officials in our state and federal governments play a large role here in bringing transparency.”

Hitherto, experts have pointed out that people with underlying medical issues are more likely to die from coronavirus. African Americans have more underlying health issues, work in unstable jobs, have lower access to health insurance, and have less access to healthcare. Critics say these unconscious racial bias as factors exacerbating the death of black Americans from COVID-19.

“It’s hard to make up for decades, maybe centuries, of inequality of application of healthcare to people of color.”

The paucity of COVID-19 testing among African Americans

When the US Centers for Disease Control and Prevention first released its testing guidelines, the priority was on people with travel history. Consequently, this excluded the majority of black patients in low-income areas. However, Dr. Uché Blackstock, a practitioner and CEO of Advancing Health Equity noted that the virus was likely circulating in communities before the first discovery.

In Wisconsin, the confirmed cases moved from one to over 350 in less than two weeks. Health officials believe the virus was probably brought into the city when a resident came in contact with someone from a nearby rich, white suburb. David Bowen, the state representative was the first lawmaker to be diagnosed. Health experts later confirmed he had passed the virus to three people. However, only one of the three was able to get tested. According to Bowen,

“When white communities get sick, we in the black community are threatened to die from the same sickness, with lack of healthcare often leaving us to self-diagnose.”

“We know that black Americans are particularly vulnerable. This is a social, economic and racial justice issue. How one community is treated impacts all communities across the country.”

Adequate testing is the key to defeating the pandemic. If African Americans are not getting enough testing, a lot of them will walk around spreading the infection without knowing. Consequently, the entire society will be hurt.