Barbie is an iconic female cartoon character. Most children and some adults love to have and play with one. Therefore, getting the opportunity to dress up a Barbie is a great honor. Vogue has invited six leading young designers to dress Barbie for its 60th anniversary come September 2019. Interestingly, Nigeria designer, Mowalola Ogunlesi is among the invited designers.

The designers will dress the doll in their signature style. Mowalola Ogunlesi’s signature style is best described as “free-spirited”.  The Nigerian designer was pictured holding a Barbie dressed in a neon green tie-dye co-ord. This design was part of Mowalola Ogunlesi’s S/S20 collection. The excited designer shared a picture of herself holding the Barbie on Instagram with the caption,

Mowalola Barbie for @britishvogue 🖤 In SS20 Acid Cow Dress , Hair by @jembomb and make up by @daniel_s_makeup 🔐. In honour of #Barbie’s 60th anniversary, @BritishVogue has invited six leading young designers to dress @Barbiestyle iconic doll in their signature style for the September issue. Photographed by @staskomarovski. On newsstands Friday 2 August.”

Mowalola Barbie for @britishvogue 🖤 In SS20 Acid Cow Dress , Hair by @jembomb and make up by @daniel_s_makeup 🔐 In honour of #Barbie’s 60th anniversary, @BritishVogue has invited six leading young designers to dress @Barbiestyle iconic doll in their signature style for the September issue. Photographed by @staskomarovski. On newsstands Friday 2 August.

Mowalola Ogunlesi was born in Nigeria into a family of cloth makers. Her mother and grandmother were womenswear designers while her father did menswear. However, she later moved to England to further explore her creative fashion sense. In an interview with Durga Chew-Bose, Mowalola Ogunlesi said,

“My grandmother started a womenswear brand in the 80s, in Nigeria, which my mum worked on. Both of them were designers. My dad does menswear—traditional Nigerian menswear. Clothes are a really big thing in our household.” 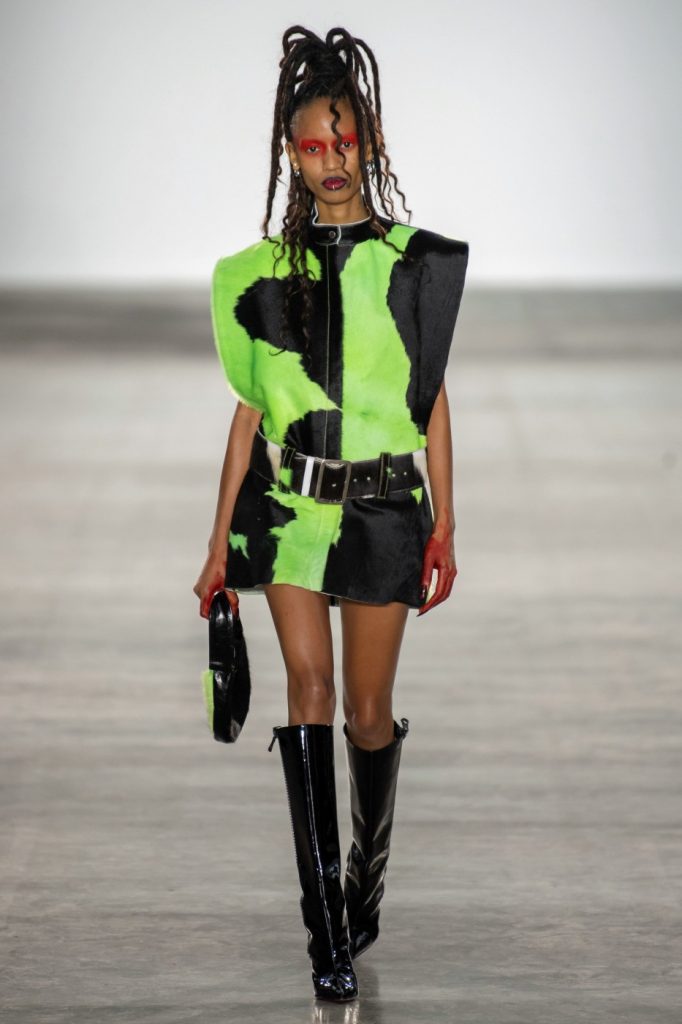 One of her limitations while in Nigeria was unavailability of WI-Fi to see fashion from a broader perspective. Also, Mowalola Ogunlesi thinks some Nigerian parents are skeptic about letting their children venture into the creative industry because of the fear of failure. However, she believes “having children who do creative things, changes the world in a different way.”

Mowalola Ogunlesi launched her eponymous brand in 2017. Consequently, she has styled a number of celebrities including Skepta for his ‘Pure Water’ video, Solange for Dazed Magazine, and Nike’s Naija World Cup Kit launch. Grammy-winning rapper, Drake, has also been spotted rocking Mowalola’s jacket. In a reaction to her Barbie design, Ogunlesi said,

“Mine is a world where everyone is free in terms of what they wear, in terms of how they think, and my women aren’t threatened by anyone – they are taking back their power. She is a Mowalola superhero – strong, captivating and ready to have a really good time. I want to be wherever she’s going.”

Mantsho Is The First African Label To Collaborate With H&M. The Pieces Are Irresistible