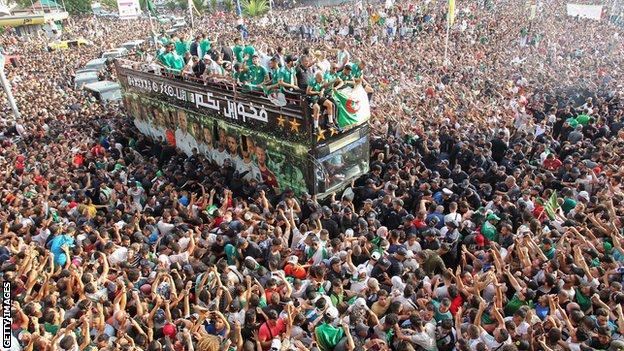 Algeria is the 2019 Afcon winner after their 1-0 victory over Senegal in the finals. Baghdad Bounedjah scored the solitary goal through a deflection. The Algerian football team, nicknamed Desert Foxes or Dessert Warriors, put up a tremendous performance throughout the tournament. Algeria was unbeaten in the tournament–right from the group stages to the final.

How Algerians Watched the Finals

As expected, the Afcon finals was a moment of unity for all Algerians across the country. Some Algerians set up outdoor screens to watch the game with their neighbors and friends.

ALSO READ: Miss Algeria 2019 Is Black, Racist Trolls Are Attacking Her But She Won’t Back Down

Immediately after Algeria’s victory at the Cairo International Stadium, cries of joy were heard all across Algiers, the capital of Algeria. Firecrackers also lit up the night sky of the capital.

Thousands of fans welcomed the 2019 Afcon champions in Algiers. Prime Minister Noureddine Bedoui greeted the team on their arrival. Two stars marked the team’s bus as an indication of the country’s second victory in Afcon. Algeria first won Afcon in 1990 when it hosted the tournament.

That moment when you realize you are the Kings of Africa 👑🇩🇿#AFCON2019 pic.twitter.com/K1jGR5hjDK

29 years ago, #LesFennecs experienced an occasion like this. Today, they get to do it again. A moment that will live in the memories of every Algerian forever 😃🏆#AFCON2019 pic.twitter.com/UjqaO53xOR

🇩🇿🏆
For the second time in the nation's history, Algeria are AFCON champions! #TotalAFCON2019 pic.twitter.com/a49DB2xz0H

Through the defeat at the finals, Senegal came second at the tournament. This was also the second time Algeria beat Senegal in the same tournament. Algeria had beaten the Lions of Taranga in the group stages. Senegal also lost in the 2002 finals against Cameroon–through penalty kicks after a goalless draw.

The Africa Cup of Nations also referred to as Afcon and officially known as CAN, is the main football competition in Africa. The tournament was first held in 1957. From 1968 onwards, Afcon became a biennial tournament. Egypt is the most successful country in Afcon, having won the cup seven times.

Egypt hosted the 2019 Afcon. The tournament started on  21 June and ended on 19 July 2019 with Algeria versus Senegal final match. This was the first time the African football competition was moved from the traditional January/February period to June/July. In addition, it was the first Afcon to have 24 teams. Previously, only 16 countries could participate in the competition.

The 2021 competition will be the 33rd edition of Afcon. Cameroon will host the 2021 tournament. The draw for the 2021 qualifiers is already out. Nigeria will face Sierra Leone, Benin, and Lesotho in the qualifiers. Algeria will face Zimbabwe, Botswana, and Zambia in the scramble for a place in 2021 Afcon. Senegal will play Eswatini, Guinea Bissau, and Congo in group I of the qualifiers.

Related Topics:2019 AfconAFCONAfcon Finals 2019Africa Cup of NationsAlgeriafeaturedSenegal
Up Next