Musicians always strive to increase their fanbase. The multiple award-winning superstar David Adeleke, popularly known as Davido recently sold out the O2 Arena, London. Although the artist frequently performs in front of large audiences, selling out the O2 Arena is a big deal. Most importantly, it shows the appreciation of his music abroad.

On the night of January 27, 2019, he thrilled a crowd of about 20,000 fans. His energetic performance cuts across old and new hit songs. Celebrities at the event include Naomi Campbell, Tim Westwood, and the Editor of British Vogue magazine Edward Enninful. Idris Elba was on stage to introduce the superstar. In 2018 Wizkid’s AfroRepublik concert sold out the same venue. Davido made it clear that it was also his dream to achieve the same feat. Besides Davido and Wizkid, only a few artists in Africa can boast of the same achievement. Therefore, artists who do consider it a great milestone.

ALSO READ: 25 of Africa’s Most Popular Music Videos Uploaded May 2017

A recap of what happened at the event

First of all, international DJ Tim Westwood and Nigerian DJ Ecool entertained the crowd in preparation for the main event. Thereafter, rising artists like Dremo, Idowest, Mayorkun, Yonda, and Zlatan thrilled the fan. These artists are all signed to the DMW record label owned by Davido. Other artists on stage to support the superstar were Victor AD and Tomi Agape.

After Davido’s introduction by Idris Elba, he appeared on stage on a suspended platform. The superstar got loud cheers from his eagerly anticipating fans. All the artists who performed that night were exceptional. However, the overwhelming cheer made it clear who the audience wanted to see. He cranked up his performance with his smash hit ‘Aye’ before switching to other hit songs. Some of the songs he performed include ‘Assurance’, ‘Dami Duro’, ‘Fall’ and ‘If’. While performing ‘Assurance’, he brought his girlfriend to the stage. The lovebirds shared a passionate kiss to the admiration of fans.

A proud display of cultural heritage 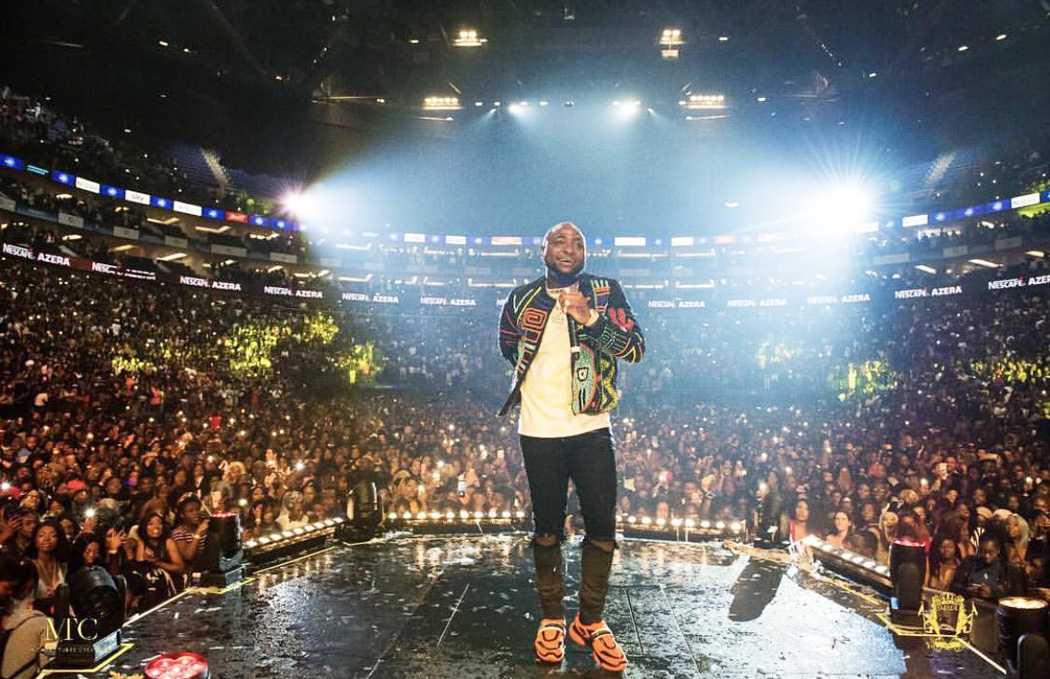 Davido is one artist that is proud of his identity and we love it!

He appeared on stage rocking the hand-beaded bomber jacket created by the OKUNOREN brothers, Taiwo and Kehinde. The brothers started the brand in 2002 importing men’s wear.  However, many years later, they revolutionized the brand to focus more on local content. The dark jacket was creatively designed using colorful beads. Speaking about the jacket the brothers said,

“This is a piece from the sacred yet to be released collection. The creation of the collection requires a deep understanding of the divinity of the Yoruba people.”

This is not the first time Davido is proudly displaying his Yoruba heritage. He frequently speaks about his local food in interviews. This may be because the Yorubas are naturally inclined to their culture. The Yorubas are one of the three dominant ethnic groups in Nigeria. They dominate the South-western part of the country.