There are many festivities that take place all over the world with interesting origins and meanings. Today, we will look into one famous festival called Halloween and some of the African-themed costumes to spice up the celebration. Halloween is observed on Oct. 31 of every year. The festivity mostly happens in western countries but it is slowly finding roots in Africa and other continents.

Halloween is believed to have originated from the Celtic festival of Samhain. The Celts lived over 2000 years ago in the United Kingdom, Ireland, and northern France. Later on, they migrated to North America from where the festival has spread to other parts of the world.

ALSO READ: All The Nominees For The South Africa Music Award

The Merging of Samhain And All Hallow’s Day

The Samhain festival which evolved to become Halloween is believed to have pagan roots. The festival was basically a ritual that marked the end of summer and the beginning of winter. The winter or cold season was deemed as the darker half of the year. Harvesting was also done at this time of the year. That meant that there was a lot of food.

On the other hand, All Hallow’s Day was observed by the early Western Church. It was started by Pope Gregory III. This was the day in which the faithful remembered the dead saints, holy apostles, confessors, and martyrs. It was commemorated on Nov. 1.

The Germanic and the Celtic-speaking people who remembered the dead at the onset of winter were the congregants of this early church. In essence, this explains how the Samhain festival merged with All Hallow’s Day to become Halloween.

Most African cultures carry out various festivities and rituals to appease and commemorate the dead. Likewise, the ceremonies are observed to ward off evil spirits looking to torment the people. These astonishing rituals are done mostly during burials and circumcision. The Odo Festival in Nigeria, Makishi Masquerade in Zambia, and Gungu Festival in DR Congo are some of such popular rituals.

In all these festivities, one thing is common and that is the use of costumes. They were mainly worn to ward off ghosts. Having said that, Halloween was also marked by carving pumpkin lanterns, lighting bonfires, and the use of black and orange or golden colors for decoration.

Now you know a thing or two about Halloween, here are some African-themed Halloween costumes that are readily available on Amazon. 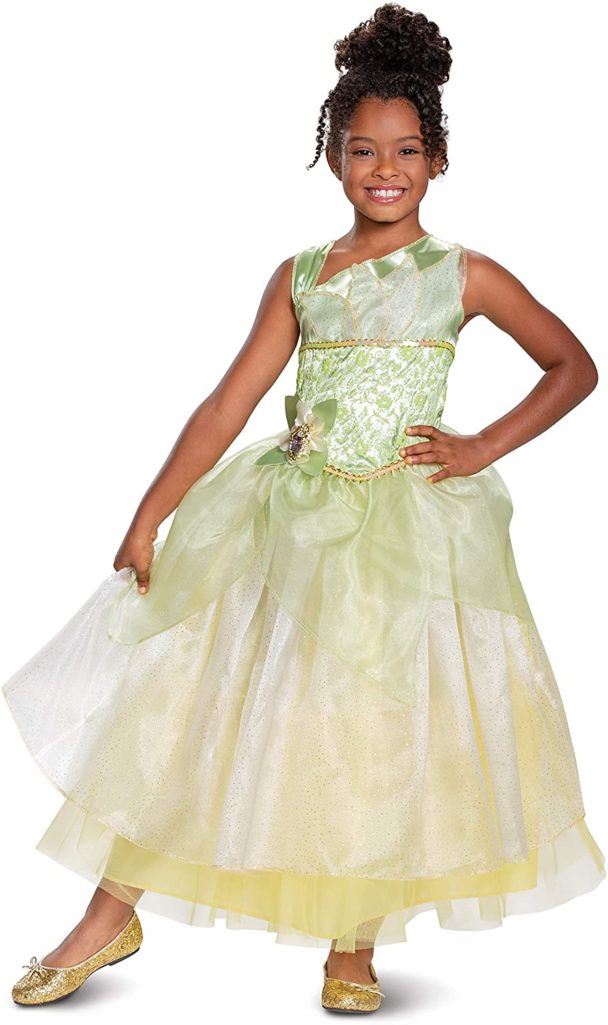 This light green and cream dress is the best gift for your little girl. The shiny light green material finishing the neckline and decorating the bodice and waist creates a modish and girly look. The sleek golden flat shoes accompany the dress so nicely.

Egyptian mummies are portrayed regularly in horror movies. How about bringing that feeling to life with this Egyptian-themed costume? Gold and black bring out the royal feel of this Egyptian king-themed Halloween costume. It heavily borrows from Egyptian royal attires worn by the pharaohs. 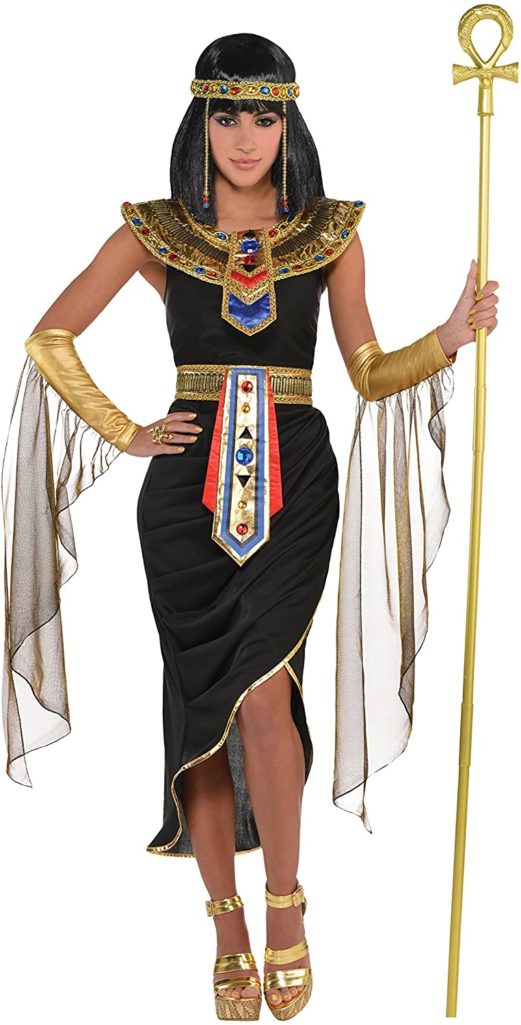 The Egyptian queens adorned themselves with expensive jewelry and clothes. This African-themed Halloween costume is a perfect attire if you want to recreate this look. There is always an ardor of sorcery that goes with this costume. 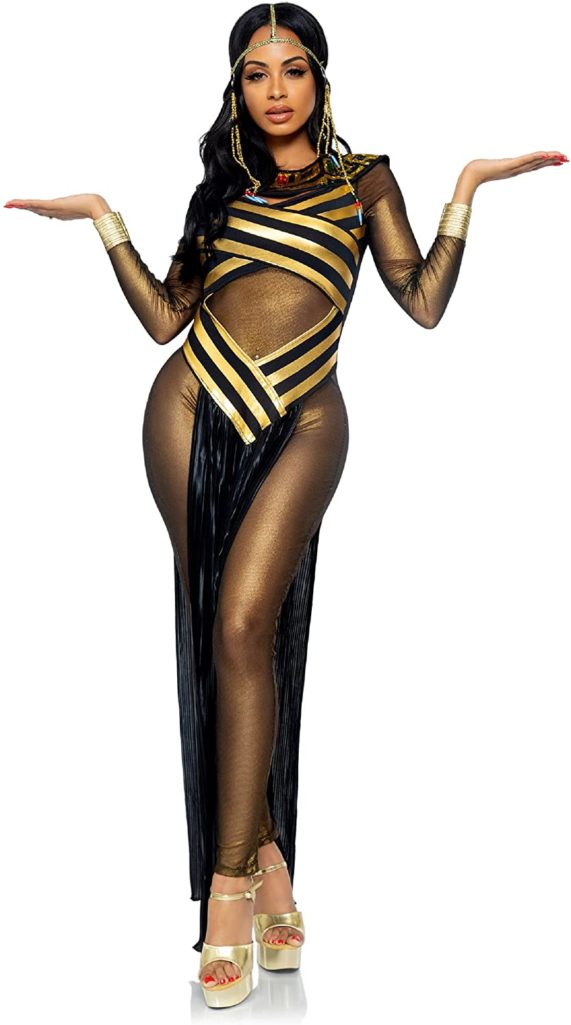 This gold and black African-themed Halloween costume will give you a Queen Cleopatra look. The queen was known for initiating trade dealings with numerous Arab nations which led to the growth of the Egyptian economy. 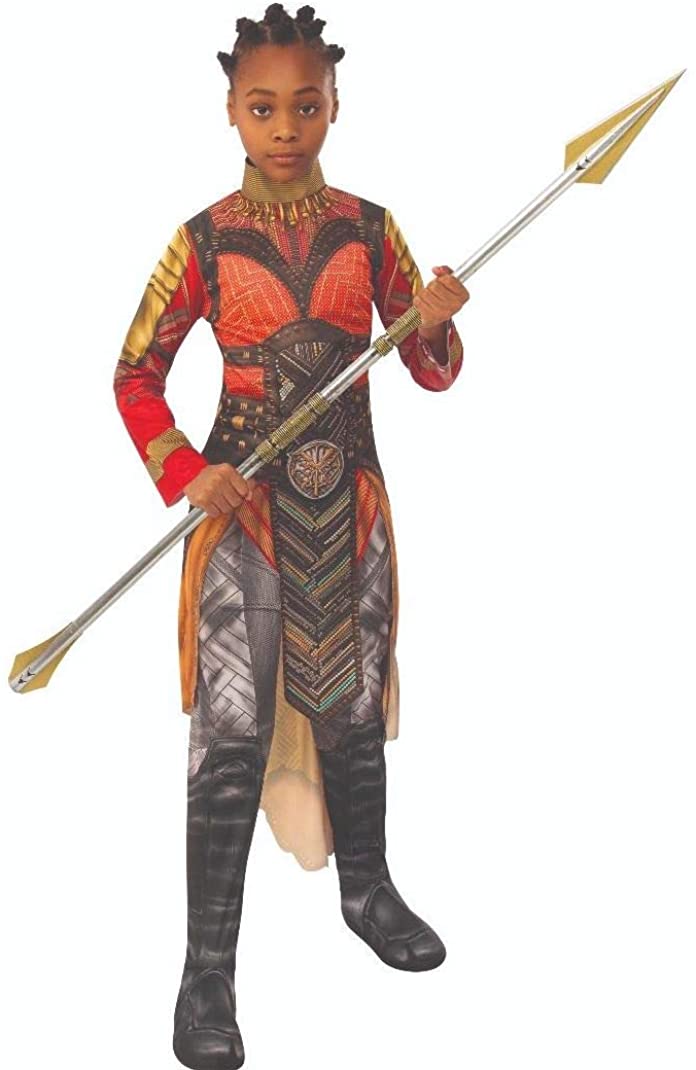 In addition to creating a huge impact in the film industry, Marvel’s Avengers have gone ahead to cause huge ripples in the fashion industry. This African-themed Halloween costume ideal for children speaks for itself. 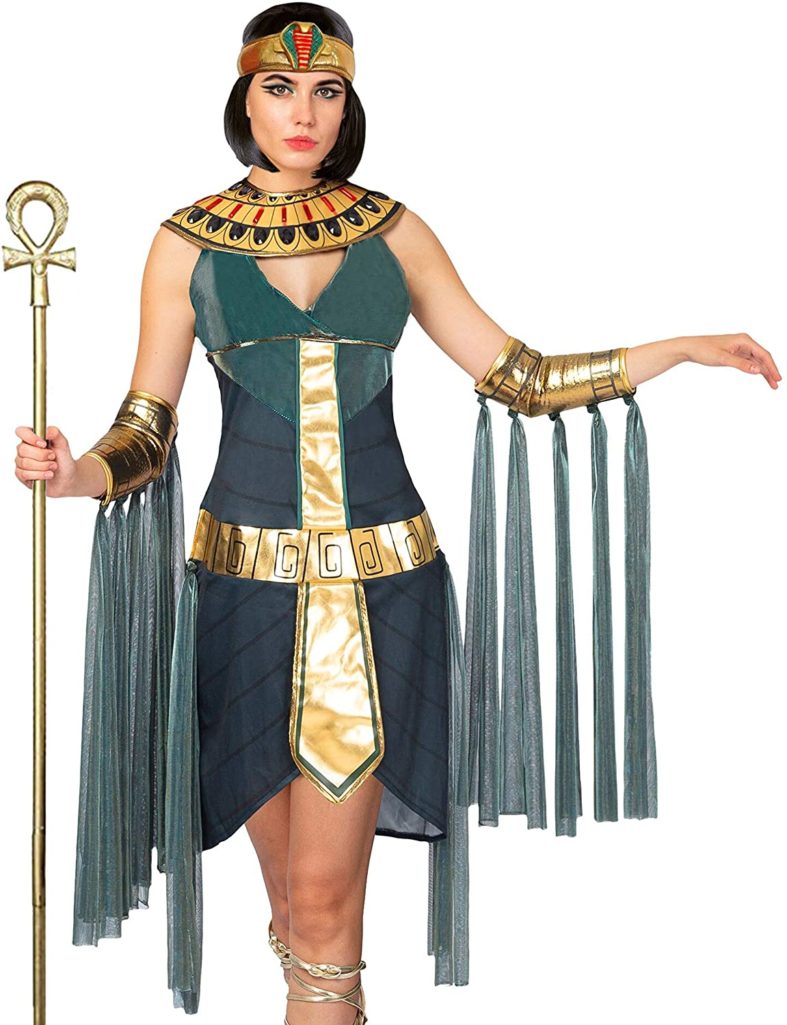 Another Cleopatra African-themed Halloween Costume outlook. Note how the gold, black, and shiny silvery colors look so good together. Rocking this dress on Halloween night will make you look like a pre-historic Egyptian princess come to life. 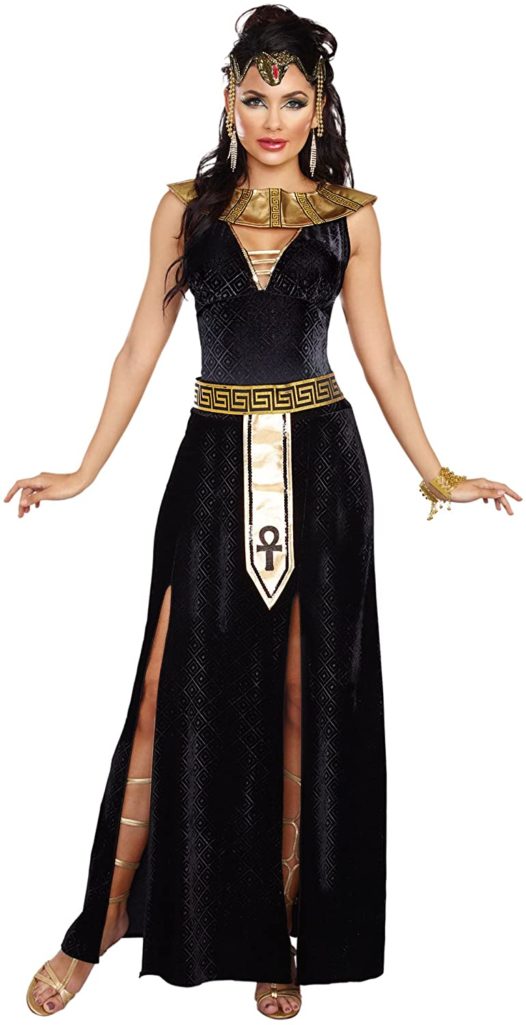 Here is another maxi version of the African-themed Halloween Cleopatra costume. Once again gold and black colors match up to keep up with the norm of the occasion. It is a great choice if you are not comfortable with revealing attires. 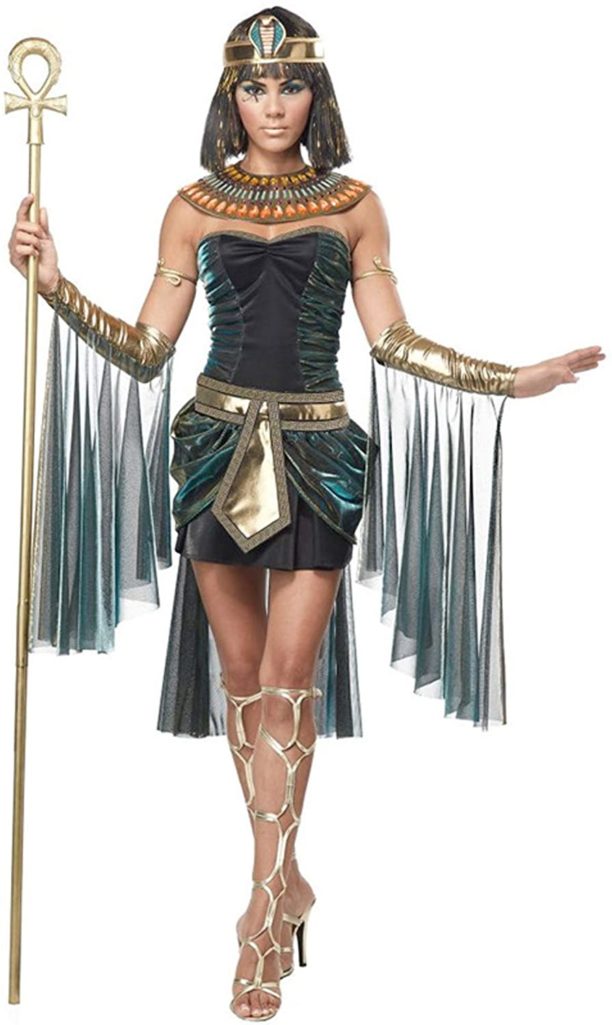 Are you still looking for an Egyptian African-themed Halloween costume? Here is another pick for you. This time you will look more like a fashionable pre-historic Egyptian princess. With staff in one hand, many people will think that you are about to cast a spell. 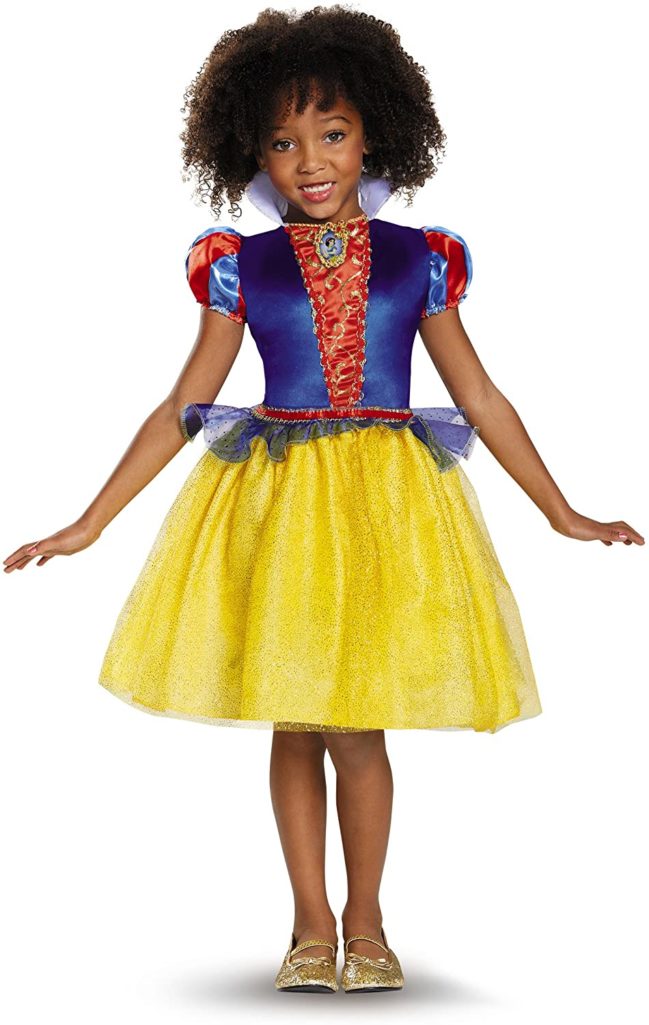 Yellow and blue never looked so good side-by-side. The red decorations and the little flare at the waist give this gorgeous dress a nice finish. Also, note the shiny golden flat shoes completing this girly look.

When the Black Panther movie hit the cinema in 2018, it immediately warmed up the hearts of millions globally. The movie also brought about new fashion trends that are ideal for African-themed Halloween costumes. This is just one of them.

Still on the Marvel effect in the fashion industry, here is a Black Panther Halloween costume. The black and shiny silver stripes decorations blend so well. Is this a costume you would want to give a try this Halloween? Share your thoughts in the comment box below.

Back to Egypt, but not literally, and we find this golden African-themed Halloween costume. The animal print definitely gives a bold fashion statement. The splash of black color and the use of beads complete this look.

Halloween is not for women and children alone. Men also have numerous themed costumes they can wear for the celebration. This is another great inspiration from the Egyptian pharaoh’s ancient attires. White and gold look perfectly good together on this brave and sober model. Flash a sword—albeit not a real one—to look more fierce.

Although the suit is not necessarily a costume, the hat, stole and necklace gives it a whole new perspective. Therefore, the whole look qualifies for a Halloween day outing, right?

Contemporary meets culture in this outfit. The animal print depicting the actual cat hanging on the shoulder is such an interesting look. In the dark of the night, it can give an onlooker a chill.

We have not stopped marveling at Marvel Avengers Halloween costumes yet. This is a perfect treat for your boy who is looking to have that heroic look. It is a subtle call on your kid to be a hero and chase the monsters. 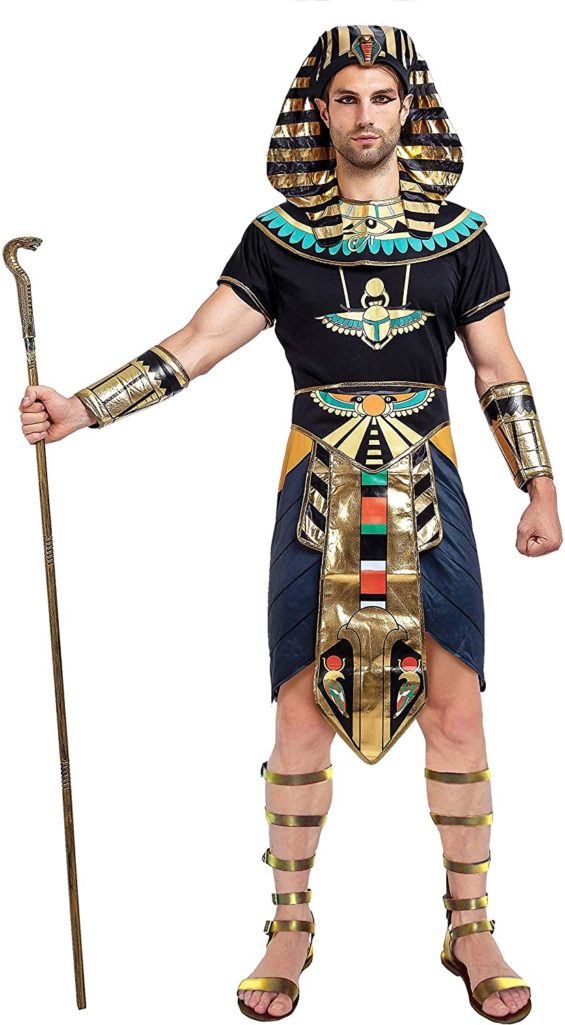 Once again the pharaoh look is still here with us. Unlike the other attires, this is more colorful with an addition of blue and red colors to the usual gold and black. It is your subtle call to rule the world of demons.

With all these costumes, this year’s Halloween should be livelier than other years. Follow the links we left on each of the costumes to purchase them. Now, you will be the center of attraction in your neighborhood and beyond. Do you have other costume plans for Halloween this year? Feel free to let us know in the comment box below.